Students should refer to Telangana SSC Board question papers for Class 10 Social Science 2019 paper 1 solutions while solving the question paper. The question paper is solved by subject-matter experts using easy to understand language. Solving the previous year papers will help students to know their preparation level and also their weak points. It also helps them to get an overview which topics carry more weightage of marks, exam pattern, difficulty level, etc. 1. How are the Narcondam and Barren islands formed?

Answer: Barren island formation: It is the northernmost volcano in the Indonesian arc. Barren volcano consists of a caldera open towards the west and a central cinder cone. Two spatter cones the south-eastern and western flanks of the cinder cone formed during the 1994-95 eruption. Barren Island rises 2 kilometres above the sea floor.

Narcondam formation: Narcondam is a small volcanic island located in the Andaman Sea. The island’s peak rises to 710 m above mean sea level, and it is formed of andesite. It is part of the Andaman Islands, the main body of which lies approximately 124 km (77 mi) to the west.

2. Name any two factors that influence climate and weather.

Answer: Two factors that influence climate and weather are: Latitude and Altitude.

3. What is Sustainable development?

Answer: Sustainable development can be defined as an approach to the economic development of a country without compromising the quality of the environment for future generations.

4. Why are the Peninsular rivers non-perennial?

Answer: The rivers of peninsular plateaus are non-perennial because they depend on rainfall as the source of water, rather than any permanent source like a glacier. In the summer season, as the rainfall is not sufficient, the rivers become dry.

5. What is the difference between Physical Capital and Working Capital?

Answer: The difference between Physical Capital and Working Capital are:

Observe the given graph and answer Q. No. 6 and 7. 6. Which state has the highest density of population?

7. Why does Arunachal Pradesh has the least density of population?

Answer: Arunachal Pradesh is the largest state in North East India. Yet, it has the least population density due to various reasons. Major part of the state is covered by forests. 91% of the reported area is covered by forests. Reserved forests, protected forests and unclassed forests constitute 20.46%, 18.49% and 61.05% of the total forest area respectively. In addition large parts of the state is also covered by mountains. It becomes difficult to build the necessary infrastructure in such mountainous regions covered with forests. Hence there is no accessibility. People will find it hard to carry out agricultural activities in such regions. There will be no access to proper medical facilities. Therefore it is difficult to sustain any human activities in such areas. Hence the population density is on the lower side in the state of Arunachal Pradesh.

8. What are the reasons for the decline in the death rate after 1900?

Answer: The reasons behind the declining death rate in India include epidemic control, more and better medical facilities, control over famine, a balanced diet, etc.

In earlier times, there were not many medical facilities available or known to people which led to earlier deaths. They used to die even after a simple fever. But with changing times, the awareness about medical facilities and other things have significantly improved and the average life of a person in India has pushed to 65.

9. Why are the Himalayas important to India?

Answer: Himalayas are very useful to India in many ways.

Answer: Seasonal migration refers to the movement of various bird, insect, and mammal species from one habitat to another during different times of the year. The migration is necessary because seasonal fluctuation factors such as the availability of food, sunlight, and the temperature of the air or water become intolerable in one habitat, usually during the winter, making breeding and even survival difficult.

11. Prepare a pamphlet on the importance of Organic farming

Answer: Organic farming is the cultivation of crops which does not use synthetic fertilizers, pesticides, hybrid genes, and livestock food additives.

Organic farming has many benefits such as

12. Write a letter to the concerned authority on the necessity to increase employment opportunities in rural areas.

Answer: Employment can be increased through various initiatives taken in rural areas.

If the local authorities are able to provide employment opportunities in their rural areas then the standard of living will improve and there won’t be any need for the rural population to migrate to cities. 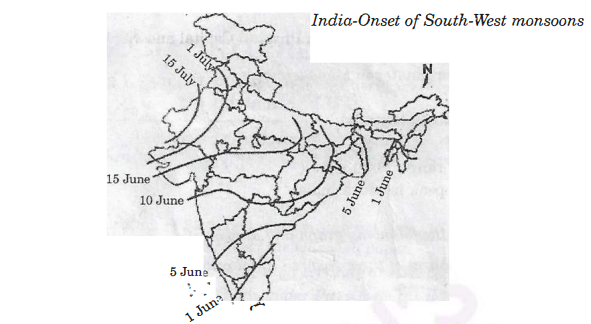 (a) When do south-west monsoons enter Rajasthan?

(b) What is meant by the onset of monsoons?

Answer b: Onset of monsoon means the start or arrival of monsoon

14. Explain the problems faced by the labourers in the unorganised sector nowadays.

How is the National Food Security Act being implemented at present?

Answer: The problems faced by the labourers in unorganised sector are:

Answer: The National Food Security act was passed in the year 2013 and the major focus of this act was that all kinds of hotels should supply quality food to the people so that the people can grow in a healthier environment.

The National Food Security act has been carried out presently by the group of volunteers who serve all across the nation and offer the best and the quality food services to the people.

The food industry is maintained by a team of quality analysts who examine each and every ingredient of the food so that the customers remain healthy throughout the year.

15. Read the following paragraph and interpret.

The socio-economic aspects are very important for water use management. Conflicts within communities in a region and across sectors such use for agriculture, industry or drinking water are common.

Answer: Although 70% of earth’s surface is filled with water, we are not able to use them for drinking purposes. The reasons are varied, we can’t use the sea water for drinking due to high saline content. Hence people living in coastal areas also face drinking water issues. On the other hand there are people who live in desert areas, hence they face issues of water scarcity. People who have access to river water, lakes, and ponds also face a drinking water crisis due to pollution of the rivers, lakes and ponds due to excessive use of pesticides, fertilisers, industrial pollution etc. Hence a large majority of people face conflicts arising due to lack of water. Within India there are many conflicts between states on water sharing, within a state there are conflicts within regions due to water scarcity. Agriculture is one of the biggest consumers of water. In some states the water usage for agriculture is much higher than required. In some states even though water availability is on the lower sides, farmers still grow crops that are highly water intensive since the return from those crops are very high. There are regions where high water intensive industries are located despite low availability of water, all these factors lead to unequal distribution of water and puts a lot of stress on the available water resources to meet the demands of a growing population. In villages farmers have their own wells and tube wells for irrigation purposes to increase the farm produce. This massively reduces the groundwater levels thus impacting water availability and food security of people. Due to massive expansion of cities, it has given rise to many housing societies in the cities. To meet their own needs, these housing societies have their own groundwater pumping devices, thereby greatly depleting the groundwater levels.

Answer: Globalisation is the process of rapid integration or interconnection between countries. It results in the movement of people, investments, goods, services and technology. People move from one country to another in search of better education, opportunities, jobs, income etc. There is truth in the opinion that Government decisions and policies play a role in the movement that is necessary for globalisation. If a country is importing products from other countries, then the Government has to put in place favourable policies. If the Government puts in unfavourable policies like imposing more trade barriers, for example, if higher import duties are imposed by the Government then the imported goods will be expensive for the consumers. If consumers are reluctant to purchase the goods then it will not help in increasing the trade. Governments can use trade barriers to increase or decrease (regulate) foreign trade and to decide what kinds of goods and how much of each, should come into the country.

16. Outline the following in the given map of India

(iv) A river originates in Manasarovar.

17. (a) Observe the following graph and analyse it.

(b) Observe the following graph and analyse it.