With the help of the previous year question paper students can improve their knowledge and work on their weak points. By doing so, they can avoid repeating the same mistakes and score good marks in their exam. So, to help students here in this article we have provided complete solutions of Telangana SSC Board question papers 2016 paper 2. The solutions are solved by our subject professionals using simple language. 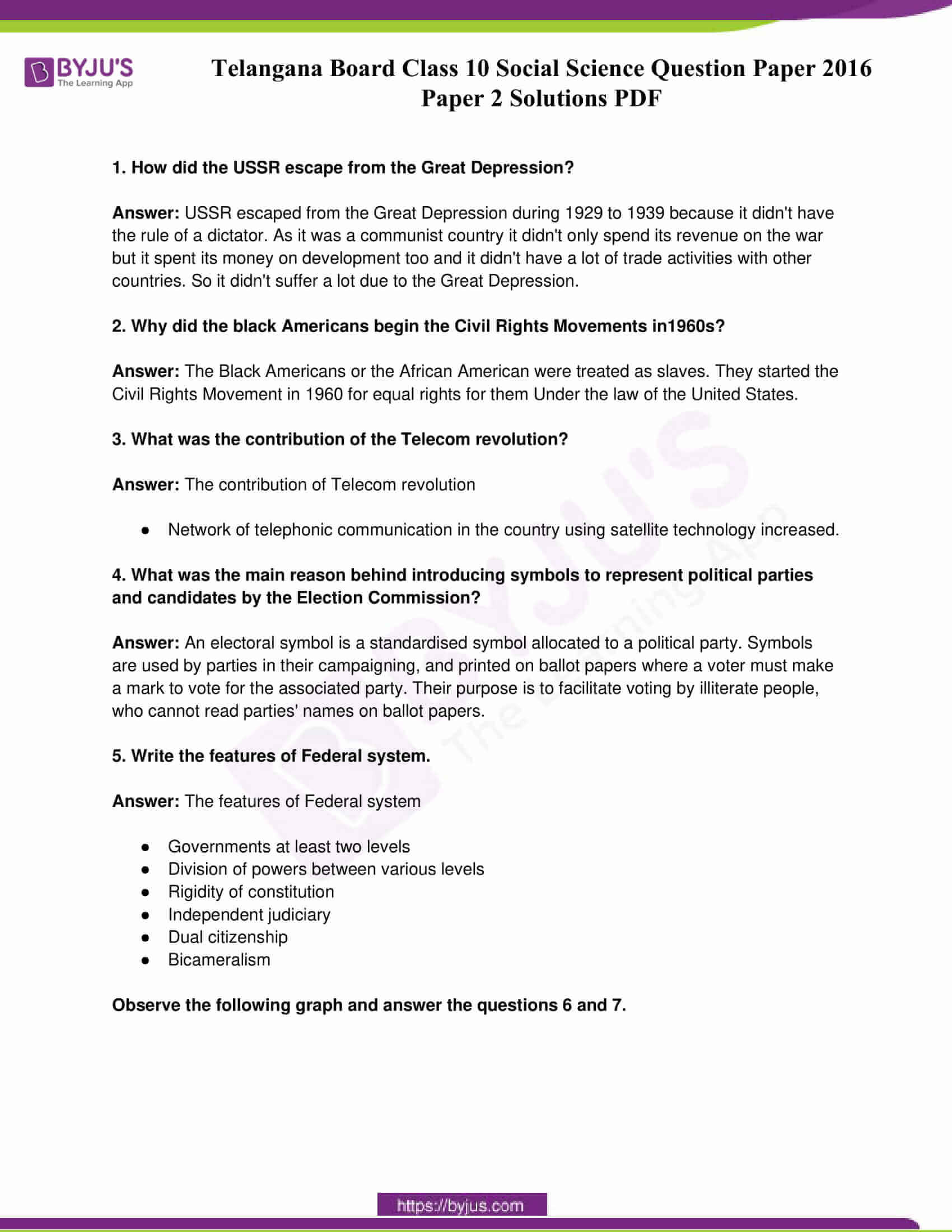 1. How did the USSR escape from the Great Depression?

2. Why did the black Americans begin the Civil Rights Movements in1960s?

Answer: The Black Americans or the African American were treated as slaves. They started the Civil Rights Movement in 1960 for equal rights for them Under the law of the United States.

3. What was the contribution of the Telecom revolution?

Answer: The contribution of Telecom revolution

4. What was the main reason behind introducing symbols to represent political parties and candidates by the Election Commission?

Answer: An electoral symbol is a standardised symbol allocated to a political party. Symbols are used by parties in their campaigning, and printed on ballot papers where a voter must make a mark to vote for the associated party. Their purpose is to facilitate voting by illiterate people, who cannot read parties’ names on ballot papers.

5. Write the features of Federal system.

Answer: The features of Federal system

Observe the following graph and answer the questions 6 and 7.

7. What is the reason for decreasing in the nuclear stockpiles after 1985?

8. What suggestions do you give to maintain friendly relations with neighbouring countries?

Answer: Indian Government has already maintained friendly relations with neighbouring countries, however some of the important points one can think about are

9. Write the role of Dr. B.R. Ambedkar in preparing the draft Constitution of India.

Answer: The role of Dr. B.R. Ambedkar in preparing the draft Constitution of India

10. What are the situations that paved to strengthen the regional parties in present days?

13. Draw the outline map of India.

14. What are the situations that led to strengthening Nazism in Germany?

15. Read the paragraph given below and interpret.

India has been extremely successful in holding together and maintaining its unity and integrity. India was seen as a fit case for breakup given its extreme diversities and the fact that it has not done so, is a valuable lesson for many other countries.

Answer: India is a secular and democractic country. Although there are lots of diversities in terms of religion, language, customs, traditions, India has inherently been a very tolerant nation. Here elections are held through a fair and transparent manner and all the citizens have the right to vote and choose their leaders. Each and every citizen is given equal rights by the constitution of India. If the rights are trampled upon then there is judiciary to protect the rights of people irrespective of the caste, religion, creed etc. The laws are passed through the legislature of the country, and the Government of India is held accountable by the people and Parliament of India. Hence the laws are made keeping in mind the best interests of each and every individual and there are sufficient checks and balances to make sure that the country remains united. The law of the land, the executive, the Judiciary, legislature and the Constitution constantly works to make sure that no citizen of India faces discrimination on any matter.

Read the paragraph given below and interpret.

India was forced to open up and ‘liberalise’ its economy by allowing freer flow of foreign capital and goods into India. On the other hand, new social groups asserted themselves politically for the first time, and finally religious nationalism and communal political mobilisation became important features of our political life. All this put the Indian society into great turmoil, we are still coming to grips with these changes and adapting ourselves to them.

Answer: India was facing a huge economic crisis by 1991. It was facing a Balance of Payment issue. India had foreign exchange reserves that would last only for a couple of weeks. The Central bank refused to provide any further credit. The Government collapsed. One of the important leaders was assassinated. After elections a new Government was formed, led by former Prime Minister PV Narasimha Rao. Manmohan Singh was chosen as the Finance Minister. He led the economic reforms of 1991 through Privatisation, Liberalisation and Globalization (LPG). Industries in India found better opportunities for business. Investments started increasing. GDP started rising and the people in Urban areas benefited more from these economic reforms. There was political turmoil because certain groups demolished a place of worship since it was built hundreds of years back on another religious place of worship. The evidence was put forward by the Archaeological Survey of India. It was the basis on which the Supreme Court of India brought a closure to the case through its judgements so that grievances faced by different groups are alleviated.

16. Locate the following in. the World map.

17. Observe the following table and write a paragraph analysing it.

Observe the following table and write a paragraph analysing it.