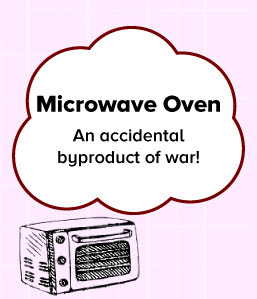 The Amazing story of the Microwave Oven

Little Binnie was playing with her Lego bricks on a lazy Sunday afternoon when an enduring thought brought a smile to her lips. “Today I want to help mommy in the kitchen.” She declared to herself. But how could she help? Cooking was out of question and her mother would not allow her chop veggies with a knife. She thought for a while. “If I can’t go near the stove or chop veggies, I can definitely help mommy bake a cake in the MICROWAVE OVEN!” That’s it! Her eyes twinkled.

“Binnie you can definitely help me prepare for the cake, but I can’t allow you to be around the microwave oven,” her mother said.

Puzzled Binnie asked, “But mom, our microwave oven doesn’t have any fire.  Why can’t I be around it?”

“Well, a microwave oven may not use fire but it definitely produces heat from electricity.”

“Yes, Binnie, let me tell you the interesting story of the oven. Did you know that this indispensable kitchen appliance was an accidental invention?”

About 74 years ago, during World War II, an American scientist, engineer and inventor Percy Lebaron Spencer was working as the leading expert in radar tube design in a company called Raytheon Technologies Corporation. Radar is a detection system that uses radio waves to determine the range, angle, or velocity of any object. His exceptional knowledge in wireless communication helped him secure Raytheon an exclusive government contract to create new radar equipment for MIT’s Radiation Laboratory and aid the allies in World War II.

A radar magnetron is like an electric whistle that creates vibrating electromagnetic waves instead of sounds.

One day in 1946, when Spencer was testing a magnetron, he struck his hand inside his pocket to fetch the chocolate bar. To his utter surprise, the chocolate bar had completely melted inside his pocket. This was Spencer’s Eureka Moment! Spencer decided to investigate the situation. He began experimenting with the magnetron using food items, including eggs and popcorn kernels. Spencer placed the popcorn kernels near the radar tube and watched them sputter, crack and pop all over his lab. He realised that microwaves could cook food quickly, even faster than conventional ovens that used heat to cook. With this, the microwave oven was born!

Growing up poor around the turn of the century, Spencer would have spent his entire life working at a local spool mill, had he not been fascinated by the phenomenon of electricity. A local newspaper mill had begun using electricity and was hiring people to work at the mill. Curious to know about electricity, Spencer learned everything he could and eventually secured himself the job as one of three people qualified to install electricity in the mill.

Just after a year, the first commercial microwave cooking oven hit the market. The oven was 1.8 metres (5 ft 11 in) tall, weighed 340 kilograms, cost about US $5,000 (Rs. 375,574.40!), and was named the Radarange. The oven consumed 3 kilowatts, which is about three times as much as today’s microwave ovens. Needless to say, it wasn’t a big seller in the market. Soon in 1955, the first domestic microwave oven was introduced, but that too failed to create an impact as it cost an arm and a leg and microwave technology was still unknown to many. By 1967, Amanda (a division of Raytheon) introduced the first domestic microwave oven that was relatively affordable ($495) and reasonably sized. This marked the beginning of the use of microwave ovens at homes. Subsequently, the concept of cooking quickly in a microwave oven started to spread to other parts of the world. Soon companies like Litton and Japan’s Sharp Corporation joined the countertop microwave oven market and began manufacturing affordable microwave ovens.

“Wow!” exclaimed Binnie. “The story of the microwave oven is so overwhelming. All thanks to Dr Spencer for this amazing accidental invention!”

Well that was the story of the accidental invention of microwave ovens. Did you like reading this story? Do let us know your thoughts in the comments below.