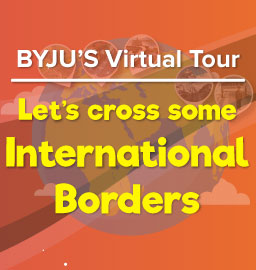 What’s the first thing that comes across your mind when you think of BORDERS? Long barbed wires, soldiers in uniforms, carrying heavy machinery, and riding on a tank? Their faces marked with black ink, their biceps strong and muscular, and their eyes keenly looking out for any enemy trying illegally to cross the borderline.

Well, that’s the scenario we all have seen and heard in movies. But borders are not necessarily that scary all the time. In fact, there are many international borders that are stunningly beautiful and have interesting tales behind them.

Join us on our virtual tour, as we will cross some unique and crazy international borders, without any passport!

Can you imagine a border to be a priceless work of art? The border of Vatican City and Italy is one such place to be. Interestingly, this tiny country grew up inside the city of Rome! The border is marked by the entry of St. Peter’s Square, the large, ornate plaza located directly in front of St. Peter’s Basilica in Vatican City. It was designed by the famous Italian sculptor and architect Gian Lorenzo Bernini. The strange part about Vatican City is that there are no airports or seaports, which means the only way to enter the city is by crossing the border with permission and on foot!

The border of these three countries is marked by the Three-Country Cairn. A monument of stones that was erected on the site in 1897 by the government of Norway and Russia (which was administering Finland at that time). By 1901, the Swedish also contributed their stone to the monument. Today, this border is considered as one of the most peaceful borders in the world.

Parts of the border between Poland and Ukraine are decorated with giant images of fish on the grass on each side of the Polish-Ukrainian border. The tail of the first fish lies on the Poland territory and its head on the Ukraine territory, and vice versa. The Polish artist Jaroslaw Koziara created these images with the intention to send the message of unity between these two countries. One can see these giant fish images from the Horodyszcze village and Lublin province in Eastern Poland, and from Varyazh city and Lviv Oblast in Western Ukraine. Every year, a festival is held on the borders. It is called ‘The Land Art Festival.’ Truly, if any border can look cute from its aerial view, this is the one!

Have you ever wanted to be in two countries at the same time? Sitting on the borderline of those two countries and sipping a hot cup of chocolate? You can totally do that in Baarle-Nassau town! A patchwork of borders splits this town between Netherlands and Belgium. The craziest part is that the border is not actively drawn in the town. Which means some parts of the border pass through restaurants and living rooms of homes. The complexity of this border results from numerous ancient treaties, land swaps, and agreements between the Lords of Breda (a tiny city in the southern part of Netherlands) and the Dukes of Brabant(a province in the south of the Netherlands). Even today, different laws are actively enforced inside each enclave.

Have you heard about nature actively taking part to act as a border between two countries? You will be amazed to know how the summit of the great Mt. Everest separated China from Nepal. Interestingly, there is a huge disagreement between China and Nepal regarding the height of Mt. Everest. While China continues to measure the height of Mount Qomolangma (the Chinese name of the Mt Everest) as 8844.43 meters, the Nepalese government claims that the mountain is 12 feet higher than the Chinese calculation.

Let’s finish our virtual tour of unique borders with this one. The North and South Korea border is arguably one of the most famous borders in the world. Known as the Korean Demilitarized Zone or DMZ, it is one of the most heavily guarded borders in the world. This DMZ splits the Korean peninsula into two halves. There is a little fun fact here – at the DMZ, the border literally splits a table into two halves, allowing officials of both countries to sit down and negotiate without even leaving their country.

The world was formed without any borders but mankind has created imaginary lines for the sake of convenience. While some of these boundaries are heavily-guarded barriers created by humans, others witness nature playing an active part in creating those lines. Today, most of these borders draw a lot of tourists through their unique nature and socio-culture diversity.

What is your opinion about the existence of these international borders? Do borders demark more than just the transition from one country to another? Do let us know your thoughts in the comments below.

Liked this story? We have more such interesting stories for you in The Learning Tree Blog.

What is wrong with all the maps of the world?

How Fine China Stopped China from Being So Fine!

Weird, but True: Can you make sense of your senses?