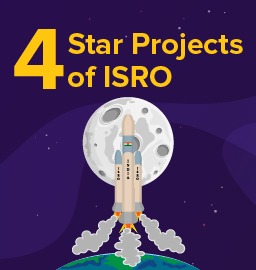 Did you know about these heroes of ISRO?

Did you know that the latest smartphones in the market can now latch on to NavIC? NavIC(Navigation with Indian Constellation) is India’s very own navigation system just like the GPS of the US.

Up until now, most of the smartphones have been using US-powered GPS. But that changes with the Indian Space Research Organisation(ISRO)’s, IRNSS satellite as discussed in the video above. This is not the first time that ISRO has made us proud. In fact, ISRO is now considered to be one of the top 5 space agencies in the world!

But was it always the case? What projects are responsible for giving ISRO this worldwide recognition? While we have covered some of them in the video above, today, we talk about the recent star projects or as we call them the ‘Heroes of ISRO’ that have helped us make history.

Discovering three new species of bacteria: In a quest to understand the origin of life, in 2009, ISRO sent a giant balloon to the Earth’s stratosphere layer, where most organisms fail to survive due to excess ultraviolet radiation. Here, they found 12 bacterial and 6 fungal colonies of which three species were new discoveries. These species were named Janibacter Hoylei, after astrophysicist Fred Hoyle, Bacillus Aryabhata, after the famous Indian astronomer Aryabhata and ISRO’s first satellite, and Bacillus Isronensisafter ISRO.

GSLV -F09/ GSAT – 09: Also known as the great communication satellite, SLV-F09 launched 2230 kg South Asia Satellite GSAT-9 into a Geosynchronous Transfer Orbit (GTO) (see the image below). The vehicle was designed to inject a 2 – 2.5 ton class of satellites into GTO. GSLV-F09 was launched on May 05, 2017, from Satish Dhawan Space Centre SHAR (SDSC SHAR), Sriharikota. The launch was widely regarded as a display of India’s soft power and regional influence. Data from GSAT-9 is shared with Nepal, Bhutan, Maldives, Bangladesh, and Sri Lanka. The satellite has the capability to provide critical communication links in times of disasters as the region is highly prone to cyclones, earthquakes, tsunamis, and floods.

GSLV MKIII:  GSLV MKII is a three-stage heavy-lift launch vehicle developed by ISRO.  Among many other things, the vehicle has a cryogenic upper stage i.e. it uses liquid hydrogen and liquid oxygen as fuel which gives the required thrust. Cryogenic engines are usually prepared for the ‘upper stages’—the last stage of the rocket—because this stage provides 50% of the velocity of 10.2km per second needed at the point of injection of a satellite. GSLV MK III is designed to carry 4-ton class of satellites into Geosynchronous Transfer Orbit (GTO) or about 10 tons to Low Earth Orbit (LEO). GSLV -MK III has placed satellites like GSAT -19, GSAT -29 and Chandrayaan-2 successfully.

Chandrayaan – 2 : While you can read what the mission was here, it is said that the mission was a 98% success. Even though Vikram Lander could not make a soft landing, it lost contact very close to the surface of the moon. All the other stages – the launch, the orbiter’s precise placement in the Moon’s orbit, and the separation of the lander from the orbiter – had been successful.

While there are many categories of Earth’s Orbit, here we will talk about the altitude-wise classification.

As illustrated, the lower Earth orbit starts just above the atmosphere, the high Earth altitude begins about one-tenth of the way to the moon.

The distance between the satellite and Earth’s surface or height of the orbit determines how quickly the satellite moves around the Earth. An Earth-orbiting satellite’s motion is mostly controlled by Earth’s gravity, click here to learn how! As satellites get closer to Earth, the pull of gravity gets stronger, and the satellite moves more quickly.

We hope this article was as informative and fun for you, as it was for us. If you know anything that we may have missed here, share it with us in the comment section. To know more about space missions and milestone achievements that changed our understanding about our world, galaxy and more, stay tuned to The Learning Tree and Keep Learning!