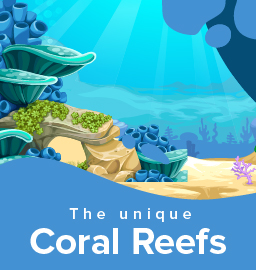 Varsha loved the waters. Just the very act of being in the water made her feel really calm and peaceful. She got this from her father, who is a marine biologist. When she went scuba diving the first time, she fell in love with the oceans all over again. Watching all the beautiful marine life around her was a thrilling experience. She already knew about the many colourful fish she would meet, but what caught her attention most was some plants she had never seen before. After coming out of the water, Varsha asked her father what those plants were.

He replied saying that plants underwater are of two types.

Like terrestrial plants, these underwater plants too, do the function of converting all the carbon dioxide inside the water to oxygen through the process of photosynthesis. Aquatic plants are found in abundance in shallow waters as it’s easy to get sunlight there.

Just as he was talking about this, Varsha asked him curiously, “What category would the colourful rock-like things fall under Papa? Are they rocks or some other strange type of plant or animal?”

Varsha’s dad asked her if she’s asking about the thing in the picture below? 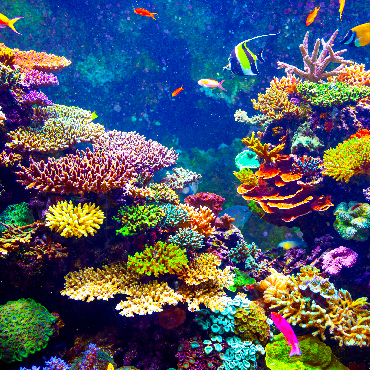 “Yes, exactly this Papa!” she exclaimed with joy. 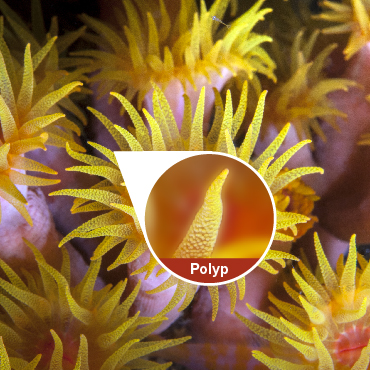 “These are called coral reefs”, he said. He explained further, “Coral reefs are an ecosystem, made up of many thousands of tiny animals called polyps. They are one of a kind. They are stationary animals, which means they are attached to the seafloor. They look like rocks but are very much alive.”

“How strange and wonderful,” said Varsha. “Well, if they are stationary then how do they get any food? What do corals even eat? Wait, do they even eat,” she asked, all excited.

“That’s a good question. Corals don’t make their own food. Instead, they depend on the colourful algae that live on it to make food for them. Just like other plants, algae make food using sunlight, through photosynthesis. This food is shared with the coral and in return, the coral gives the algae a safe and sunny place to live.” 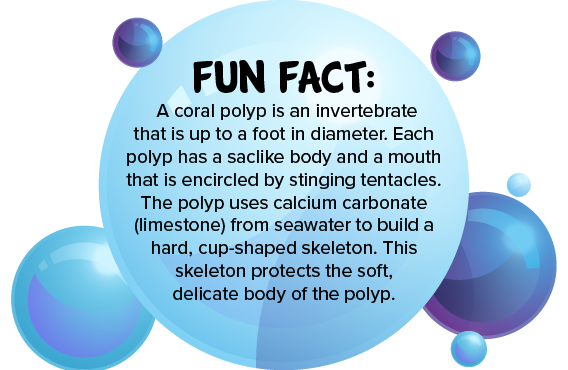 “Wow, nature is full of wonders! I am going to always look out for coral reefs whenever we go scuba diving. They are my new favourite!” said Varsha.

“Oh, but you may not be able to do so for long”, replied her father. He explained saying that many coral reefs around the world were dying due to rising temperatures and acidity of the oceans. This is a direct effect of global warming and climate change.

“That sounds serious. Is that a problem?” asked Varsha. “Oh yes!” he said. “Excess heat absorbed by the oceans disrupts the process of photosynthesis carried out by the algae living in corals. In turn, the corals lose their colourful food source and become weak. This process is called coral bleaching and it’s a serious threat to reefs all over the world. You must know Varsha that the Great Barrier Reef in Australia, the single largest reef in the world, has already perished.”

“Oh no, that is catastrophic! Is there something we can do to stop this?” asked Varsha. “Oh yes, absolutely yes!” he replied with a smile. “We can start by reducing water wastage and recycling it through practices like rainwater harvesting. Apart from that, minimizing plastic usage is another step as a lot of our trash is dumped into our oceans and plastic is very harmful to the coral reefs. Also during scuba diving and other underwater activities, one should avoid touching or going too close to coral reefs, as such acts can permanently damage them. With small steps like these, we can bring back the colour to the ocean and let the ‘lungs of the ocean’ breathe again.”

“Thank you, Papa. I’m going to tell all my friends about this and together, we’re going to save the corals,” Varsha asserted with a new-found purpose as the two of them started walking back home.

Did you find this article helpful? Keep Learning with more climate-related articles like this:

What caused the Australian bushfires?