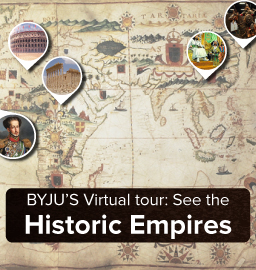 Travel back to time: Visit the Historic Empires

Welcome back to our virtual tour month. We hope you had a breathtaking moment learning about the beautiful museums around the world. Today, we are going way back in time for a mission. For that, we need to wear our protective armours, polish our shields, and sharpen our swords. Wondering where we are travelling? We are going to be part of some of the greatest and oldest empires of this world.

Excitement much? Let’s begin our journey.

We start off with the Roman empire for a purpose. The empire was not just the greatest in the span of human history, it was also the longest (lasted for 1,480 years! if we include the Byzantine empire’s time period). The Roman Empire began when Augustus Caesar (27 BCE-14 CE) became the first emperor of Rome. Throughout his ruling period, he conquered and held large swathes of territory and constructed several extensive political and social structures. Even today, over 2,000 years later, these structures are popular tourist monuments. By 285 CE, the empire grew so vast that it became impossible to rule alone from its central government and thus, was divided by Emperor Diocletian (who ruled between  284-305 CE) into a Western and an Eastern Empire. Several features of the modern world are the results of the Roman Era. For instance, the Romans expanded and passed down Greek architecture, science, and philosophy to future generations. Their beautiful art and architecture serve as an inspiration even today. After ruling for hundreds of years, the empire ended with the rule of Romulus Augustulus in the west, suffering from repeated invasions. In the east, the empire continued as one of the strongest and wealthiest under the rule of the Byzantine Empire, until the death of Constantine XI in 1453 CE.

Famous quote by Augustus: “I found Rome a city of clay but left it a city of marble.”

The Mongol Empire was the largest contiguous land empire and the second-largest empire in history after the British Empire. They covered 23 million square km of land by defeating several enemies much more powerful than them. Founded by the Mongol warlord Temujin who later took the title of Genghis Khan in 1206 C. E, he unified the Mongols with Turkish tribes to make it a strong empire. The empire rose to prominence by conquering most of the Middle East, Russia, and China. With only two million Mongols in the whole world, they could accomplish great feats due to their expert military tactics, brilliant political and economic organization, and discipline. Research states that the favourable climatic conditions and well-planned economic structures helped the empire to aggressively expand and flourish within a century. While fighting against Western Xia (also known as the Xi Xia) empire in northern China, Genghis Khan fell ill and soon died. With his death, the empire got divided among his four sons and eventually drifted apart.

The Portuguese Empire was known to have the strongest naval fleets. It was the first global empire in history spanning four continents and was the earliest and longest-lived of the modern European colonial empires. Their reign began in 1415 when the Portuguese took Ceuta, a North African Muslim city. Eventually, they expanded to Africa, India, some parts of America, and Asia. They could expand rapidly due to their expert weaponry skills, naval superiority and their abilities to build several ports to trade gold, sugar, and slaves. After World War II, decolonization took place in several parts of Europe. The empire eventually crumbled due to international pressures and economic tensions. It wasn’t until 1999 when Portugal signalled the end of the empire by giving up Macau to China.

Officially known as the Great Yuan, the Yuan Dynasty was founded by Kublai Khan, the grandson of Genghis Khan, who founded the Mongol Empire. It was the first foreign ruling dynasty of China, covering 14 million square km of land. Under Kublai Khan’s rule, China saw the first use of paper money as their primary currency. The famous Italian merchant, Marco Polo visited China during the Yuan Dynasty and introduced China to Europeans. The Dynasty lasted till 1368 when the Ming Dynasty defeated the Yuan forces.

The Akkadian Empire was the first empire of ancient Mesopotamia (modern-day Iraq) and was the world’s oldest empire. Under it, the indigenous Akkadians and Sumerians were united, thus making it a bilingual city. It was founded by Sargon of Akkad and seven other kings ruled after him. Very little is known about the location of the capital city of Akkad, although scholars have documented over 7,000 texts detailing the Akkadian Empire.

Through the course of history, we have seen empires rise and fall over the centuries. With the triumphs and faults of each previous empire, there were lessons in store for the next ones. If the saying is true that ‘history repeats itself’ perhaps we can also learn a lot from their culture, politics, and their accomplishments.

Which is your favourite empire and why? Do let us know in the comments below.