Even if it’s an essential part of the TN Board Exams, students often forget or overlook the practicals, regarding them as unimportant. However, practicals have a massive significance in the learning process as they help to engage students. It helps them to develop essential skills and develop a broad understanding of the Scientific concepts. Tamil Nadu Class 10 Science Practicals are also an important part of the board exams and students need to be proficient in it if they wish to score high marks in the exams.

In this article, we have provided a list of experiments that have to be performed by the students for Tamil Nadu Board Class 10 Science Practical for this academic year. These experiments have been collected based on the Samacheer Kalvi Class 10 books. From here, students can find the details that are required by them to complete the practicals, which is based on the TN Board Class 10 syllabus.

Here we have given the table of contents and list of experiments.

Students should try to score well in the practical exams so that the added marks would help them to improve the overall score. Meanwhile, the experiments are explained in an easy format with instructions for the students to follow for accurate execution.

Description of the experiment in the TN Class 10 Science Practical book follows the given format:

Check the List of Class 10 Science Experiment from below:

1. DETERMINATION OF THE WEIGHT OF AN OBJECT USING THE PRINCIPLE OF MOMENTS

Aim: To determine the weight of an object using the principle of moments

i. A metre scale is supported at its centre of gravity by a knife-edge or suspended by

using a thread tied to its centre so that the scale is in the horizontal position. Ensure that

the scale is in an equilibrium position.

such that the scale is in equilibrium.

iv. Measure the distance d1 and d2 of the two weight hangers from the centre of the scale

v. The experiment is repeated for different positions of the unknown weight. Measure the

distances. The readings are tabulated as follows:

Result: Using the principle of moments, the weight of the unknown body W1 = ……. Kg Wt.

2. DETERMINATION OF FOCAL LENGTH OF A CONVEX LENS

Aim: To determine the focal length of a convex lens by using 2. UV – Method: Fix the given convex lens vertically on the stand and place it on the table. Place the wire gauze object on the left side of the convex lens (say at a distance greater than

2f). Measure the distance between the object and the lens (u). Place the screen on the right

side of the convex lens and adjust its position to get a sharp, inverted and diminished

image. Measure the distance between the screen and the lens (v). Repeat the same procedure, by changing the distance of the object (u) and tabulate your observations.

Result: The focal length of the given convex lens

Objective: To determine the resistivity of the material of the given coil of wire.

• Connect the battery, ammeter, given wire, rheostat and key in series, as shown in the circuit diagram.

• Connect the voltmeter in parallel to the unknown resistor.

• Close the key and hence the circuit is closed.

• Adjust the rheostat such that the ammeter reads a current of 0.5 ampere.

• Note down the potential difference across the resistor as shown by the voltmeter.

• For each current, note down the corresponding potential difference as shown by the voltmeter.

• Measure the diameter of the wire using a screw gauge.

• Measure the length of the coil using a metre scale 4. IDENTIFY THE DISSOLUTION OF THE GIVEN SALT WHETHER IT IS EXOTHERMIC OR ENDOTHERMIC.

Aim: To test the dissolution of given salt is exothermic or endothermic

If the reaction or process liberates the heat, then it is called exothermic.

If the reaction or process absorbs the heat, then it is called endothermic

Take 50ml of water in two beakers and label them as A and B. Note the temperature of

the water from the beaker A and B. Then, add 5g of sample A into the beaker A and stir well until it dissolves completely. Record final temperature of the solution. Now, repeat the same for the sample B. Record the observation.

Result: From the inferences made

Note: Sodium hydroxide, ammonium nitrate, glucose, calcium oxide etc. may be given as the sample.

5. TESTING THE SOLUBILITY OF THE SALT

Aim: To test the solubility of the given salt based on the saturation and unsaturation

of the solution at a given temperature.

Result: From the above observation, it is inferred that the amount of salt required for saturation is _______ g

6. TESTING THE WATER OF HYDRATION OF SALT

Aim: To check whether the given sample of salt possesses ‘Water of Hydration’ or

not. To verify the presence of water molecules in the given hydrated salt.

The water of crystallization or water of hydration is the phenomenon shown by certain salts in which water molecules are present inside the crystals and are responsible for their colour and geometry.

Procedure: A pinch of crystalline copper sulphate taken in a test tube and heated for some time. Water droplets are seen on the inner walls of the test tube. This shows that the given salt

contains water of crystallization. If the above observation is not noticed for the given salt, the water of hydration is absent. Result: In the given sample of salt, Water of crystallization/hydration is

7. TEST THE GIVEN SAMPLE FOR THE PRESENCE OF ACID OR BASE

Aim: To identify the presence of an acid or a base in a given sample.

In an acid medium, In a base medium,

Aim: To prove that oxygen is evolved during photosynthesis.

1. Take a few twigs of Hydrilla plant in a beaker containing pond water.

2. Place an inverted funnel over the plant.

3. Invert a test tube filled with water over the stem of the funnel.

4. Keep the apparatus in the sunlight for a few hours. 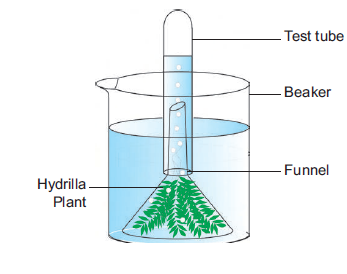 Observation: After one hour, it is noted that water gets displaced down from the test tube.

9. PARTS OF A FLOWER

Aim: To dissect and display the parts of the given flower and observe the Calyx, Corolla, Androecium and Gynoecium. Draw labelled sketches.

Procedure: With the help of the needle dissect the different whorls of the flower. Observation: Draw and label the parts of the flower.

10. TO STUDY THE LAW OF DOMINANCE

Aim: To study the law of dominance by using model/picture / photograph. To find out the genotypic ratio and phenotypic ratio in pea plant using checkerboard 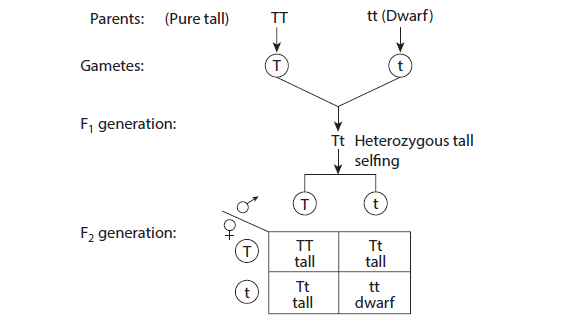 Inheritance of only one pair of contrasting character is called monohybrid cross.

11. OBSERVATION OF TRANSVERSE SECTION OF DICOT STEM AND DICOT ROOT

Observation: A.The given slide is identified as T.S of Dicot Stem

(i) Vascular bundles are arranged in a ring.

(iv) 3 to 6 layer of collenchymas tissues present in hypodermis. B.The given slide is identified as T.S of Dicot Root

(iv) Cortex is made up of parenchymatous cells 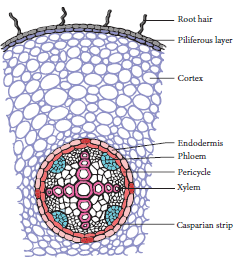 Identification of longitudinal section (L.S) of the human heart.

Aim: To observe and draw a labelled sketch of L.S of the human heart and write the structure.

Materials Required: Model showing the L.S of the human heart

Observation: The given model is identified as L.S. of the human heart

1. The human heart has four chambers. It is made up of two auricles and two ventricles

2. The chambers are separated by interauricular and interventricular septum. It prevents the mixing of oxygenated and deoxygenated blood

3. Tricuspid valve – It is located between the right auricle and the right ventricle

4. Bicuspid valve – It is located between the left auricle and the left ventricle

5. The heart is covered by a protective double-walled membrane called pericardium

6. The heart pumps blood to all parts of the body 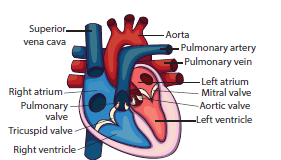 Identification of L.S of the human brain.

Aim: To observe and draw a labelled sketch of L.S of the human brain and indicate the different regions of the brain.

Materials Required: Model showing the L.S of the human brain

Identification: The given model is identified as L.S. of the human brain

1. The brain is enclosed in the cranial cavity

2. It is the controlling centre of all the body activities

3. It is covered by three connective tissue membrane or meninges: Duramater

4. The human brain is divided into three parts namely forebrain, midbrain and hindbrain

Identification: The given slide is identified as red blood cells

1. They are biconcave and disc-shaped

2. They are also known as erythrocytes

3. Mature mammalian RBCs do not have a nucleus

4. Haemoglobin is a respiratory pigment which gives red colour

5. It transports oxygen from lungs to tissues and carbon- dioxide from tissues to lungs

The given slide is identified as White blood cells

1. WBC’s are colourless and they have a nucleus

2. They are also known as Leucocytes

4. They fight against germs and other foreign bodies and thus protect the body from microbial infections and diseases

5. There are five different types of WBC named as Neutrophils, Eosinophils, Basophils, Lymphocytes and Monocytes

Aim: To identify the endocrine gland, its location, a hormone secreted and functions – Thyroid gland and Pancreas

1. Endocrine glands – (a) Thyroid gland (b) Pancreas – Islets of Langerhans

Identification: Identify the flagged endocrine gland, write its location, the hormones secreted and its functions. Location: Thyroid gland is a bilobed gland located in the neck region on either side of the

4. It is required for normal growth and development

5. It is also known as personality hormone

6. Deficiency of thyroxine results in simple goitre, myxoedema (in adults) and cretinism (in children)

(b) Pancreas – Islets of Langerhans

Identification: The flag labelled endocrine gland is identified as Islets of Langerhans in the pancreas.

Location: Islets of Langerhans are seen embedded in the pancreas which is located in the abdominal region.

1. Insulin converts glucose into glycogen and stores it in the liver and muscles.

3. Insulin and glucagon maintain the blood sugar level (80 – 120 mg/dl) by their antagonistic

Stay tuned with Byju’s to get the latest notification on TN Board along with class 9 syllabus, sample papers, marking schemes and more.