What are Congruent Figures?

Definition: In simple words, if two figures can be put exactly over each other, they are said to be congruent. Another definition of congruence is as follows: If one of the figures can be obtained after a series of rigid motions of the other, the figures are said to be congruent. This also means that the sides and the angles of both these figures are exactly the same. Angles of these congruent figures with the same measure are called congruent angles. Sides of these congruent figures that have the same measure are called congruent sides.

In the figure given below, triangle ABC and triangle EFG are congruent.

Another aspect to note is that the corresponding sides and angles of congruent triangles are equal.

Flipping an object over a line without affecting its size or shape is called reflection. Rotating an object around a fixed point without changing its size or shape is known as rotation. Sliding a figure in any direction without changing its size, shape, or orientation is known as translation. Any method of shifting all the points of a shape in the plane so that the relative distance between them remains constant and their relative positions remain constant is called rigid motion. A sequence of rigid movements is a combination of all the types of movements mentioned above. 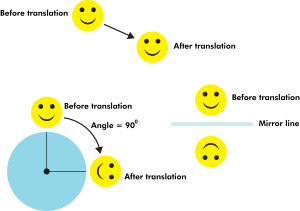 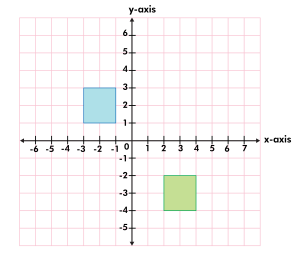 Solution: The circle is translated to the right by 5 units and down by 5 units.

Example 2: The given set of figures are congruent; jot down the corresponding sides and angles. 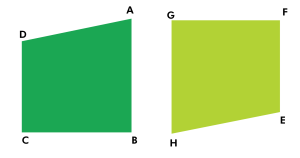 Example 3: Prove that the figures given below are congruent. 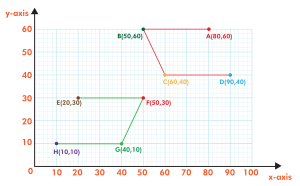 Solution: To prove the given figures are congruent, we try to describe a sequence of rigid motions such that the two figures overlap.

Each division is 10 units

First the figure ABCD is reflected about the y axis.

Hence ABCD and EFGH are congruent.

Solution: They are making identical strips, that is both the rectangles need to be congruent. Hence the length of the strip that Jojo should make should be 19cm as well.

What is the difference between reflected figures and congruent figures?

Flipping an object over a line without affecting its size or shape is called reflection. Congruence is the property of an object where each side and angle is exactly the same as the other. Reflected figures are congruent to its preimage.

Why is the order of vertices important when writing a congruent statement?