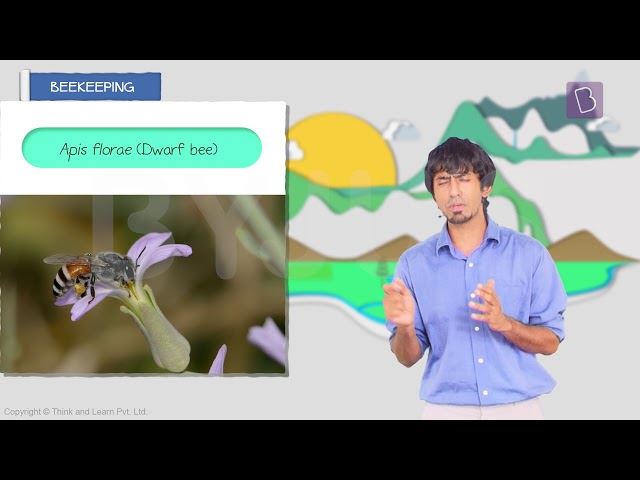 Bees are one of the many insects in the world that can produce something that is beneficial to all of us. We obtain honey from these bees and as we all know, honey is an important food for human beings. Since ancient times, honey is used for treating several diseases, and it is an antioxidant, therefore beekeeping is an important activity.

“Apiculture is the scientific method of rearing honeybees. “

The word ‘apiculture’ comes from the Latin word ‘apis’ meaning bee. So, apiculture or beekeeping is the care and management of honey bees for the production of honey and wax. In this method, bees are bred commercially in apiaries, an area where a lot of beehives can be placed. Usually, apiaries are set up in areas where there are sufficient bee pastures – such as areas that have flowering plants.

Bees are mainly reared for their honey. Besides that, we also obtain beeswax through beekeeping. Bees produce honey from the sugary secretions of plants. Although honey is an important ingredient in many food dishes, beeswax holds a lot of commercial significance too. It is used in the cosmetic and medical industry, as well as a coating for cheese, and as a food additive. It is also used as the main component for making candles, preparing polishes for the shoe, furniture, etc.

The main advantages of beekeeping are:

Working at the Beehive

In a colony, there are 10,000 to 60,000 bees! But all of them do not collect nectar- there is a strict division of labour. The queen bee and female bees lay thousands of eggs. Larvae that hatch are fed royal jelly and the duration that they are fed will decide their role as a worker or queen. The drone bees are male and their job is only to help in fertilizing the eggs laid by the queen, and the worker bees do the actual work of collecting nectar.

The beekeepers mostly take care of only those bee species whose names start with “Apis”- as they are the only species which produce honey. Common species of honey bees that are reared are as follows:

Megachile pluto or Wallace’s Giant Bee is officially the world’s largest living species of bee. Females have a wingspan measuring 2.5 inches and a total body length of 1.5 inches.  Just like any other species of bee, it has a stinger and will sting if provoked. (Image not to scale)

To know more about Apiculture, its meaning, importance and the products obtained, keep visiting BYJU’S website or download BYJU’S app for further reference.

How is apiculture done?

Apiculture is the act of rearing honeybees. In this method, the bees are bred commercially in apiaries. Apiary is an area where a large number of beehives can be placed. Here, the bees are taken care of and managed to produce wax and honey.

What are the products obtained from apiculture?

The main products obtained from apiculture are honey and wax. These products are used in cosmetic industries, polishing industries and pharmaceutical industries. Honey has medicinal values and is also used as a food additive.

What is the importance of apiculture?

Apiculture is important for the following reasons:

How are the bees divided in a beehive? What work does each of them do?

The bees are divided into queen, drone and worker. The queen bee lays thousands of eggs, the worker bee collects nectar and the drone bee fertilizes the eggs laid by the queen bee.

Name the varieties of bees reared by the beekeepers.

The beekeepers rear only the following varieties of bees because only they can produce honey: