“Cilia are minute hair-like projections on the outer surface of a eukaryotic cell.”

Cilia are small, slender, hair-like structures present on the surface of all mammalian cells. They are primitive in nature and could be single or many.

Cilia play a major role in locomotion. They are also involved in mechanoreception. The organisms that possess cilia are known as ciliates. They use their cilia for feeding and movement. 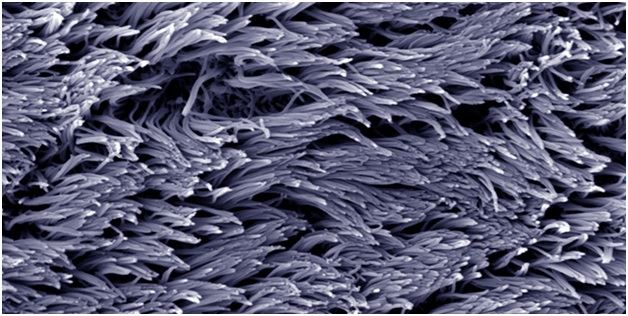 Following are the two different types of cilia:

Primary Cilia are non-motile cilia that were first discovered in 1898. These structures were long believed to be vestigial organelles. However, recent researches presented the biological roles of primary cilia that they function as a sensory cellular antenna that coordinates a large number of cellular signalling pathways. Apart from these, they also help in:

Cilia are attached to the cell at the basal body that is made up of microtubules arranged in nine triplets. They are very minute structures ranging from 0.25μm in diameter to 20μm in length.

The important functions performed by cilia involve locomotion and sensory functions. They play a major role in cell cycle and replication and also in the development of humans and animals.

Multiple cilia move in a rhythmic motion that keeps the internal passageways free from mucus or any foreign agent.

A few non-motile cilia act as an antenna that receives sensory information for the cells and processes these signals from the surrounding fluids. E.g. the cilia present in the kidney bend forcefully as the urine passes.  This sends signals to the cells that the urine is flowing.

The non-motile cilia found in the photoreceptors of retina help in the transport of molecules from one end to the other.

Ciliopathies: It is a genetic disorder of the cilia structures – the basal bodies or of cilia function. Dysfunction or defects in primary and motile cilia are known to cause numerous distressing genetic disorders known as ciliopathies.

Primary Ciliary Dyskinesia: It is an autosomal recessive disorder in which the cilia do not function normally. This condition prevents the clearing of mucus from the lungs, ears and sinuses.

What are the functions of cilia?

Cilia acts as a sensory organelle and also helps in locomotion in a few organisms. Cilia also assists in feeding in a few ciliates.

What is the composition of cilia?

Cilia is composed of a motor protein dynein and microtubules. These comprise tubulin that are linear polymers of globular proteins.

Where are cilia located?

Motile cilia are located on the epithelial cells of several internal organs such as lungs, trachea, digestive system, etc. They are also found on the protozoans such as paramecium and help them in locomotion. The non-motile cilia can be found in the dendritic knob of the olfactory neuron.

Do prokaryotes have cilia?

Cilia are found only in the eukaryotic cells. The prokaryotic cells contain whip-like structures called flagella that help them to move.