Flagella are microscopic hair-like structures involved in the locomotion of a cell. The word “flagellum” means “whip”.

The flagella have a whip-like appearance that helps to propel a cell through the liquid. Some special flagella are used in few organisms as sensory organs that can sense changes in pH and temperature.

They are filamentous structures found in archaea, bacteria, and eukaryotes.

Read on to explore flagella structure and functions in detail.

It is attached to the cell membrane and cytoplasmic membrane.

It consists of rings surrounded by a pair of proteins called MotB. The rings include:

P-ring: Anchored in the peptidoglycan layer.

C-ring: Anchored in the cytoplasm

It is a broader area present at the base of the filament.

Connects filament to the motor protein in the base.

The hook length is greater in gram +ve bacteria.

There are four different types of flagella:

Let us have a look at the important characteristics of cilia and flagella to understand how each one is different from the other. 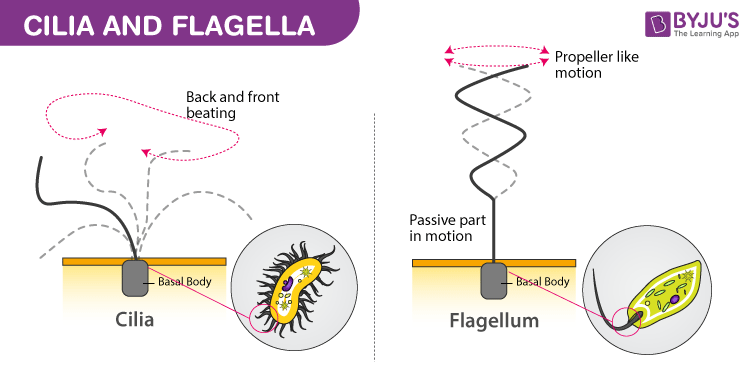 A comparative diagram of Cilia and Flagella

For more information on Flagella and other related topics such as flagella structure, types of flagella, flagella function, and cilia and flagella, keep visiting BYJU’S website or download BYJU’S app for further reference.

A flagellum is a hairlike appendage protruding from a range of microbes referred to as flagellates. Flagellum is mainly involved in motility. The flagellum in some bacteria can also function as a sensory organelle. These organelles are defined by function rather than structure. The flagella arises from the basal body.

Test your Knowledge on Flagella!
Q5