“Rhizobium is a soil bacteria that fixes atmospheric nitrogen once it finds a base inside the roots of  the leguminous plants”.

Rhizobium is the bacteria that live in symbiotic association with the root nodules of the leguminous plants. Fixation of nitrogen cannot be done independently. That is why rhizobium requires a plant host. Rhizobium is a vital source of nitrogen to agricultural soils including those in arid regions. They convert dinitrogen into ammonia. Ammonia, being toxic in nature. is rapidly absorbed into organic compounds. 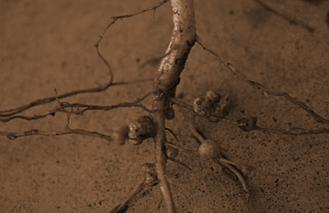 Rhizobium can be classified on the basis of the types of the plant they are associated with and also the rate of growth. Few species of Rhizobium bacteria include:

What Is Nitrogen Fixation?

Nitrogen fixation is the essential biological process and the initial stage of the nitrogen cycle. In this process, the free nitrogen available in the atmosphere is converted into ammonia (another form of nitrogen) by certain bacterial species like Rhizobium, Azotobacter, etc. and the complete process is carried on by natural phenomena.

Rhizobium plural form rhizobia are prokaryotes whose main function involves the conversion of stable nitrogen gas in the atmosphere to a biologically useful form. Nitrogenase is an enzyme complex that reduces dinitrogen to ammonia.

Nitrogen is one of the most supplied plant nutrients as it is one of the common deficiency found in soils.  Several environmental concerns are raised regarding the supply of nitrogen to the soil.

Rhizobium infects the roots of leguminous plants. They are usually found in the soil and produce nodules after infecting the roots of the leguminous plants. As a result, nitrogen gas is fixed from the atmosphere. This nitrogen is made available to the plants that help in their growth and development. When the legume dies there will be a breakdown of nodules. As a result, Rhizobium is released back to the cell where it can infect a new host.

Specific strains of Rhizobium are required to make the nodules functional in order to carry out the process. This increases the yield of the crops. Legume inoculation has been an agricultural practice for several years and has constantly improved over time.

Learn more in detail about Rhizobium, its classifications, features, significances and other related topics at BYJU’S Biology.

For more information on Rhizobium and other related articles, keep visiting BYJU’S website or download BYJU’S app for further reference.

What is the importance of Rhizobium?

Rhizobium is a bacterium found in soil that helps in fixing nitrogen in leguminous plants. It attaches to the roots of the leguminous plant and produces nodules. These nodules fix atmospheric nitrogen and convert it into ammonia that can be used by the plant for its growth and development.

What are the association of Rhizobium and leguminous plants known as?

Rhizobium and leguminous plants live in a symbiotic association with each other. In this, both the organisms are benefited from each other. The bacteria fix atmospheric nitrogen and make it available to the plants. On the other hand, Rhizobium receives nutrition from the plant in the form of organic acids.

What types of bacteria is Rhizobium?

Rhizobium is a diazotrophic bacteria that fix atmospheric nitrogen. It is a gram-negative bacteria that establish in the roots of the plants such as peas and pulses.

Which disease is caused by Rhizobium bacteria?

Is Rhizobium a biofertilizer?

Test your knowledge on Rhizobium
Q5