While Newton’s laws of motion may seem obvious to us today, centuries ago they were considered revolutionary. Sir Issac Newton is considered one of the most influential scientists of all time. His ideas laid the foundation for modern physics. He built upon his ideas put forth from the works of previous scientists including Galileo and Aristotle.

These laws of motion help us understand how objects behave when they are standing still, when moving and when forces act upon them. This article is a  description of Sir Isaac Newton’s Laws of motion and a summary of what they mean.

Sir Isaac Newton introduced the three laws of motion in 1687 in his book entitled “Philosophiae Naturalis Principia Mathematica. While formulating the three laws of motion, Newton simplified massive bodies to mathematical points with no size or rotation. This allowed him to ignore facts such as friction, temperature, air resistance, material properties, etc., This helped him concentrate solely on phenomena that were described in terms of mass, length and time. Consequently, the three laws cannot be used to describe precisely the behaviour of large rigid or deformable objects; however, in many cases, they provide suitably accurate approximations.
Newton’s laws pertain to the motion of massive bodies in an inertial reference frame, sometimes called a Newtonian reference frame, although Newton himself never described such a reference frame. An inertial reference frame can be described as a 3-dimensional coordinate system that is either stationary or in uniform linear motion., i.e., it is not accelerating or rotating. He found that motion within such an inertial reference frame could be described by three simple laws.

The first law of motion simply means that things cannot start, stop or change direction all by themselves.  It requires some force from the outside to cause such a change. This property of massive bodies to resist changes in their state of motion is called inertia. Newton’s first law is also known as the law of inertia. 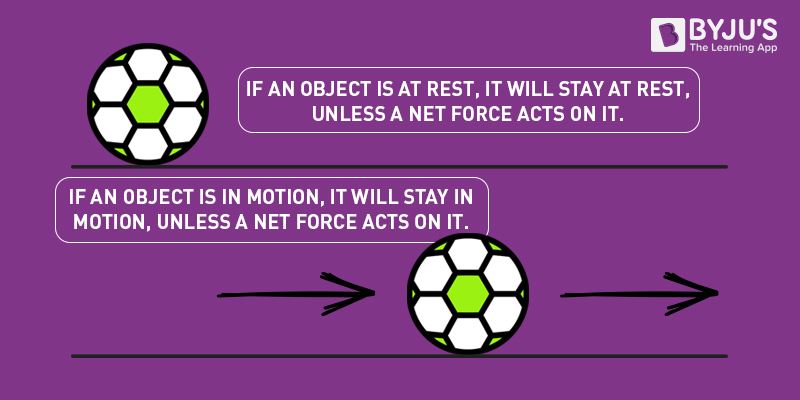 Newton’s first law of motion states that “A body at rest or uniform motion will continue to be at rest or uniform motion until and unless a net external force acts on it”. Suppose a block is kept on the floor, it will remain at rest until we apply some external force to it. Also, we know that it takes us more effort or force to move a heavy mass. This is directly related to the property known as Inertia. Hence, the first law of motion is also known as the law of inertia.
Read More: Newton’s First Law of Motion

The second law of motion describes what happens to the massive body when acted upon by an external force.  The law states that the force acting on the body is equal to the product of its mass and acceleration. 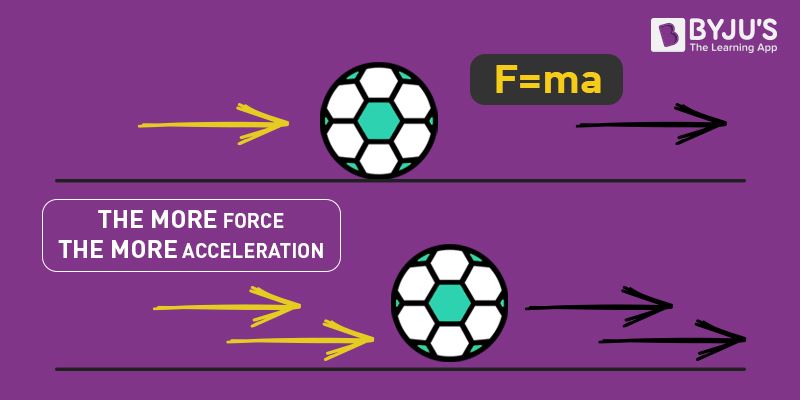 When a constant force acts on a body, the forces results in the acceleration of the body.  However, if the object is already in motion, or if this situation is viewed from a moving frame of reference, the body might appear to speed up or slow down or change its direction depending on the direction of the force.

Mathematically, we express the law as follows:

Where k is the constant of proportionality and it comes out to be 1 when the values are taken in SI unit. Hence the final expression will be,

The third law of motion describes what happens to the body when it exerts a force on another body. The law states that when two bodies interact, they apply force on each other that are equal in magnitude and opposite in direction.  A force resting on a table applies a downward force equal to its weight on the table. According to Newton’s third law, the table applies an equal and opposite force on the book. This force occurs because the book slightly deforms the table, as a result, the table pushes back on the book like a coiled spring. Newton’s third law of motion implies the conservation of momentum.

Newton’s first law of motion can explain how a magician pulls a tablecloth from underneath dishes. A negligible horizontal force is applied during the process. As per Newton’s first law of motion, the dishes and glasses remain in their state of motion (rest), as a result, they remain undisturbed. The table cloth in the trick is made so slippery such that it doesn’t apply any frictional force on glasses and dishes.

Summary of Newton’s Laws of Motion 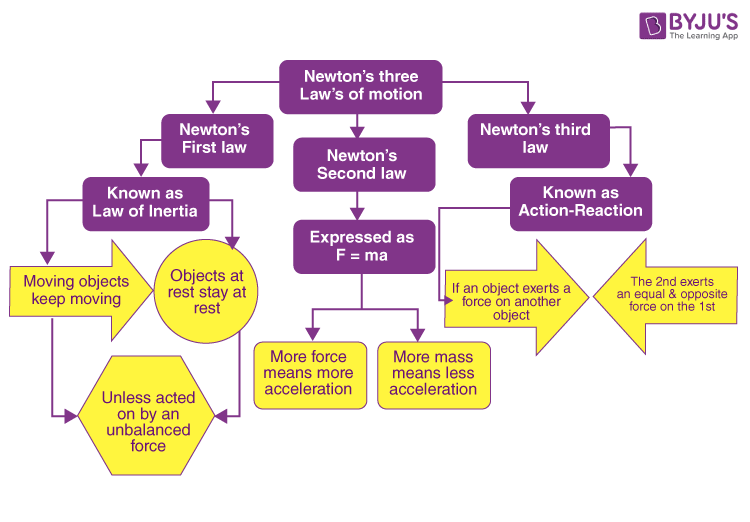 1. If a bike with a rider having a total mass of 63 kg brakes and reduces its velocity from 8.5 m/s to 0 m/s in 3.0 second. What is the magnitude of the braking force?

The combined mass of the bike and the rider is 63 kg The initial velocity of the bike is m = 8.5 m/s

The final velocity is 0

Hence the change in momentum of the car is given by

2.Calculate the net force required to give an automobile of mass 1600 kg an acceleration of 4.5 m/s2

We calculate the force as follows: F = ma

Substituting the values in the equation, 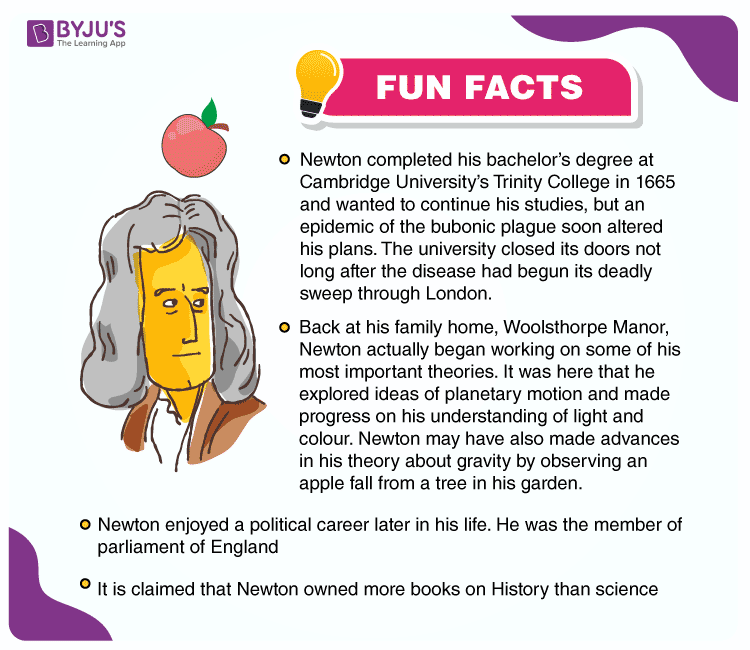