SSC CHSL 2021 exam – The recruitment for SSC CHSL exam 2021 is yet to be announced by the Staff Selection Commission.

SSC CHSL Exam Postponed – On April 19th, 2021, SSC announced the postponement of the SSC CHSL Tier I exam that was set to be held from April 12th onwards due to a surge in COVID-19 cases across the country. New dates for the balance candidates for CHSL (10+2) (Tier-I) 2020 examination will be intimated in due course.

The Staff Selection Commission has revised the dates for SSC CHSL 2020 Paper I exam for the candidates who have chosen West Bengal as their Exam Centers in view of the Assembly Elections in some States/ UT during March-April, 2021. The modifications in the exam dates are as under –

To know more about other SSC Exams, visit the linked article.

December 15th 2020 – The Staff Selection Commission has extended the date of SSC CHSL Application process. Candidates can now apply for the exam till 26th December 2020. The detailed notice of SSC CHSL Apply Online date extension can be checked on the linked page.

August 27th 2020 – The Staff Selection Commission announced the result of SSC CHSL Tier-II 2018 exam for additional candidates. The result includes the names of those candidates who were disqualified under unfair means. Check the detailed notification of Combined Higher Secondary Level Exam Result on the linked page.

August 5th 2020 – SSC decided to give one-time exemption to all the candidates who were disqualified in SSC CHSL Tier-II 2018 exams on the grounds of unfair means, a total of 4560 candidates were disqualified. Go through the detailed SSC CHSL Notification released by the commission on the linked page.

July 21st 2020 – SSC rescheduled the CHSL Tier I exam due to prevailing conditions of COVID-19 pandemic. Check the notification released on July 21st by SSC. 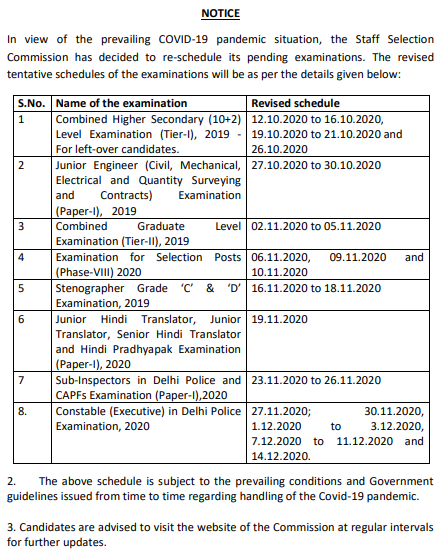 Every year, the exams conducted by the Staff Selection Commission (SSC) helps in selecting candidates who will go on to fill important government posts. Of these, one of the most popular exams happens to be the Combined Higher Secondary Level (CHSL) exam. Though nominally less tough, it is still a fiercely competitive exam. This article will cover all important aspects of the SSC CHSL Exam 2020.

The recruitment to the Staff Selection Commission to soon be conducted by the National Recruitment Agency. A Common Eligibility Test (CET) to be conducted for all Non-Technical and Non-Gazetted (Group B & C) posts under IBPS, RRB and SSC. Government exam aspirants can visit the linked article to know more about the NRA.

Given below is the tentative schedule of SSC CHSL 2020 Exam Dates:

Aspirants can go through the detailed SSC Exam Calendar 2021 on the given link to know the dates of other SSC exams as well.

Tentative dates regarding certain exam dates are released by the SSC. Candidates can visit the official SSC Website (https://ssc.nic.in/) to stay apprised of these updates.

The Staff Selection Commission has released a notification on October 28th stating that candidates appearing for SSC CHSL 2019 examination can change their exam centres for the CHSL Skill Test that is scheduled on November 26th 2020. Candidates may give their option for the change of examination centres from  October 29th to November 1st 2020.

The exam date for CHSL Tier is postponed to October 2020. Earlier, on June 1st, 2020, after assessing the situation of the pandemic, the commission released a notification stating that the SSC CHSL Exam Tier I 2019 was scheduled from August 17th onward.

In the SSC CHSL Exam notification released on March 19th 2020, the commission has deferred the  Tier I exam which was scheduled from March 17th onwards.  Owing to the situation because of COVID-19, the commission decided to postpone the examination in the larger public interest.

The detailed notice regarding SSC CHSL 2019 exam postponement is as mentioned below: 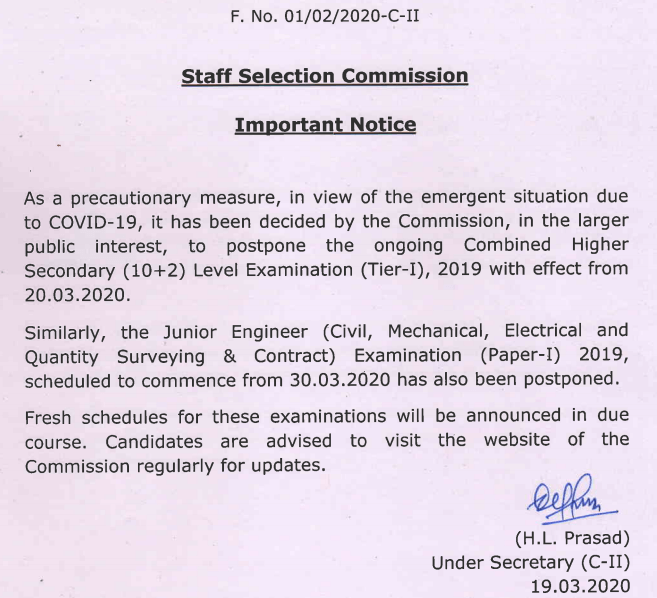 Candidates are advised to keep a track on this page for latest updates on SSC CHSL admit card and exam dates.

The Staff Selection Commission has released the SSC CHSL 2018 Result for Tier-II exam which was conducted on September 29th, 2019. Candidates who appeared for the SSC CHSL Tier-II 2018 exam can check their SSC CHSL Result on the linked page.

The SSC CHSL vacancies 2020-21 counts to 4726 for the different SSC CHSL posts in the Indian Government. For the SSC CHSL 2019, the number of vacancies released was 4893.

All SSC CHSL posts made available through SSC CHSL exam carry AISL -All India Service Liability. This means that the candidates selected for any post may be asked to serve anywhere in the country.

The different SSC CHSL Posts offered through SSC CHSL recruitment are as follows:

The table given below highlights the SSC CHSL pay scale for varied SSC CHSL Posts:

Before outlining a preparation strategy, candidates must check the official SSC CHSL Notification from time to time to get updates regarding changes in the exam pattern.

The SSC CHSL Syllabus covers a wide range of topics on a variety of subjects. The syllabus for the SSC CHSL Exam may vary from tier to tier.

The syllabus for this year’s exam is as follows:

Tier I: The topics in this section will be related to General Intelligence and Reasoning, General Awareness, Quantitative Aptitude, English Language.

Tier II: This is a descriptive exam where a candidate’s writing skills will be put to the test. Candidates will be asked to write applications and essays on various topics like Economic reforms, national securities, etc.

Tier III: This tier consists of a Data Entry Speed Test & Computer Proficiency Test. This test is compulsory for those candidates who have applied for the post of DEO and DEO (CAG).

To register for the SSC CHSL Exam 2020, candidates must visit the official SSC website to fill the application form.

The steps for SSC CHSL registration is as follows:

To crack an exam like the SSC CHSL, it is not enough to just work hard but to work smart as well. To this extent, candidates must stay updated on the Exam pattern and syllabus on a regular basis by visiting the official SSC website. The right set of study material will also go a long way in creating a clear concept of the topics covered in the SSC CHSL Exam.

Visit the given link for more details on the SSC CHSL preparation strategy and best books for CHSL.

Candidates preparing for SSC CHSL exam can visit the SSC CHSL mock test page to get free mock tests based on the latest exam pattern and prepare for the upcoming SSC exams.

Further details on SSC CHSL Admit Card can be checked on the given link.

The examination center for the SSC CHSL Exam is one of the details a candidate must always check with due diligence. Candidates must select the Centre(s) in the online Application Form in order to indicate where they desire to take the examination.

The Exam Centres of the SSC CHSL 2020 exam are:

BYJU’S provides top-of-the-mark study materials that will prove to be an excellent asset in cracking the SSC CHSL Exam. Candidates can also refer a few Solved Question Papers of prior years of the different sections to get the feel of a real test and identify any weak spots in the process. Thus, one can attempt and crack the exam with relative ease.

Q.2. For how many SSC CHSL vacancies the CHSL exam usually conducted?

Ans. The number of vacancies for CHSL usually varies every year. The SSC CHSL vacancy for the year 2019 counts to 4893 and for 2018 the Staff selection Commission released total 5,789 vacancies.

Q.3. What is the age relaxation in SSC CHSL eligibility criteria for SC/ST candidates?

Q.4. What is the application fee for the SSC CHSL exam?

Q 5. How many tiers are there to qualify for the SSC CHSL exam?

Ans. There are three tiers in the SSC CHSL exam, Tier I, Tier II and Tier III. A candidate needs to clear all three tiers in order to qualify for the exam.