NRA or the National Recruitment Agency which shall soon be set up for conducting a Common Eligibility Test (CET) for all non gazetted and non-technical Group B and Group C jobs under IBPS, SSC and RRB.

The Organisation got a nod from the Union Cabinet, chaired by PM Narendra Modi, on August 20, 2020, and is expected to make the recruitment process in Government sector more transparent and convenient. As per the latest updates, the first common test for IBPS, RRB and SSC exams is expected to be conducted in September 2021 tentatively.

** It must be noted that NRA has only been approved as yet by the Cabinet and details about its implementation, exam pattern and conduct of CET shall be notified to the candidates once a final structure for the same is released by the Government.

To get a detailed list of all the Government exams conducted in the country, candidates can visit the linked article.

The table given below mentions all the important information that one must know regarding the common test, the participating bodies, posts and other relevant data about the Agency:

With over 3 crore Government aspirants appearing for the exams every year, National Recruitment Agency has come as a boon to these candidates.

It is important for candidates to know in detail why this recruitment body is being set up and how this change will bring about transparency in the recruitment process for Government exams. Discussed below are a few important points regarding the National Recruitment Agency (NRA):

Given below is the proposed composition of the NRA. The final list of member and Chairperson shall soon be released by the authorities or the respective Government Ministries:

One important question which may arise is that what is a need to set up an individual body which shall solely be responsible for conducting Government exams? There are various reasons which can answer this question.

So, what is the need for the National Recruitment Agency (NRA)?

Following are the reasons why the Government has decided to set up NRA:

Initially, the Government intends to conduct a common test for the three Organisations – SSC, RRB and IBPS, but in the future, they may use the CET marks of a candidate as a common scorecard for all recruitments.

Since things are at a very initial stage, it is important for candidates to get familiar with the Common Eligibility Test and its aspects. This will help them easily adapt the changes made in the exam pattern and syllabus for CET.

Government exam aspirants must carefully go through the points given below:

Until the final exam pattern and syllabus is announced by the conducting body or the Government authorities, aspirants must continue with their preparation for other Public sector exams. Refer to the following links: 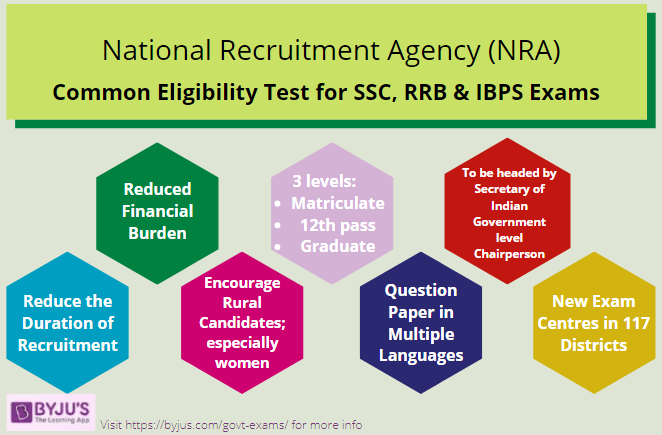 A lot of factors have been responsible for this initiative taken by the Government for approving the National Recruitment Agency.

The Common Eligibility Test will benefit around 3 to 4 crore Government exam aspirants in multiple ways. Following are the benefits of CET, which shall soon be the first step to qualifying the competitive exams:

All the points mentioned above will help candidates analyse how this Common Eligibility test will act as an advantage for them and open a wider frame of opportunities for them.

Based on the current syllabus and exam pattern for SSC, RRB and IBPS, given below are links to the section-wise syllabus for the various posts. Aspirants can refer to these until the final draft of CET exam pattern and syllabus is released by NRA:

Challenges with the National Recruitment Agency

As of now, there are certain challenges also which shall be faced by the NRA. These challenges include:

Once a detailed draft regarding the functioning of the Organisation is released, along with the selection process and syllabus, many things will become more transparent and relatable for the candidates.

The details regarding the syllabus, pattern, exam dates will eventually be released by the Government and then accordingly be made available to the candidates.

For any further update regarding the National Recruitment Agency or the Common Eligibility Test, aspirants are advised to regularly check for updates on this page.

Ans. The full form of NRA is the National Recruitment Agency. It has been approved by the Union Cabinet to conduct a common exam for IBPS, SSC and RRB non-gazetted and non-technical posts.

Q 3. What are the benefits of the NRA?

Ans. The benefits of the NRA are as follows:

Q 4. When was the National Recruitment Agency approved?

Q 5. Which Organisations shall be involved in CET?

Ans. Three Organisations will be involved in CET:

Q 6. When will the first CET be conducted?

Ans. No final dates have yet been released for conducting the Common Eligibility Test. Tentatively, the authorities plan to conduct the first CET in September 2021.