NCERT Solutions for Class 9 Science Chapter 10 Gravitation provides you with necessary insights on the concepts involved in the chapter. Detailed answers and explanations provided by us will help you in understanding the concepts clearly.

Gravity is a fascinating topic that explains many things. From how our planet stays in orbit to why things fall down. Explore NCERT Solutions for Class 9 Science Chapter 10 – Gravitation to learn everything you need to know about gravity. Content is crafted by highly qualified teachers and industry professionals with decades of relevant knowledge. Moreover, the solutions have been updated to include the latest content prescribed by the CBSE board.

Furthermore, we ensure that relevant content on NCERT Solutions Class 9 is regularly updated as per the norms and prerequisites that examiners often look for in CBSE Term II exam. This ensures that the content is tailored to be class relevant, but without sacrificing the informational quotient. BYJU’S also strives to impart maximum informational value without increasing the complexity of topics. This is achieved by ensuring that the language is simple and all technical jargons are explained at the required school level. 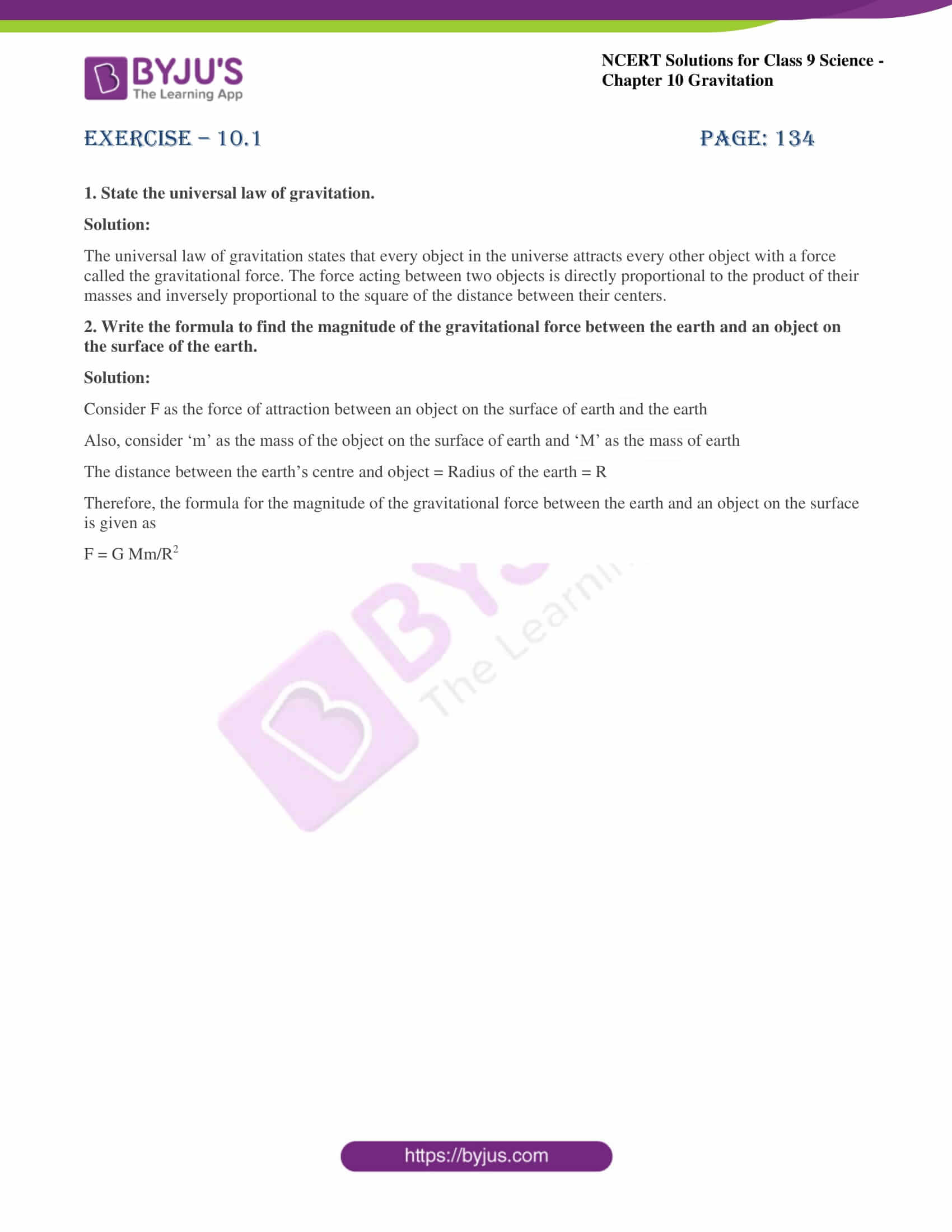 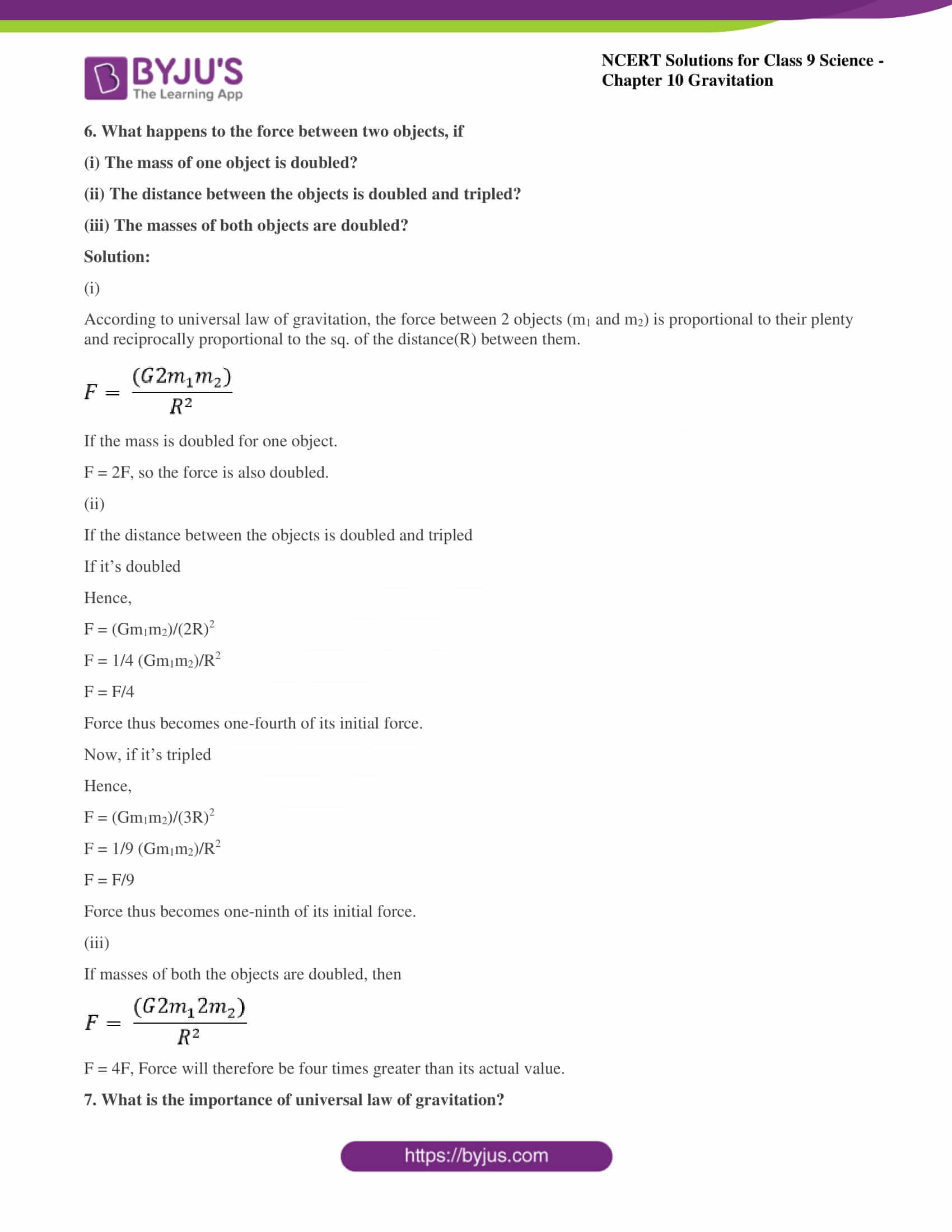 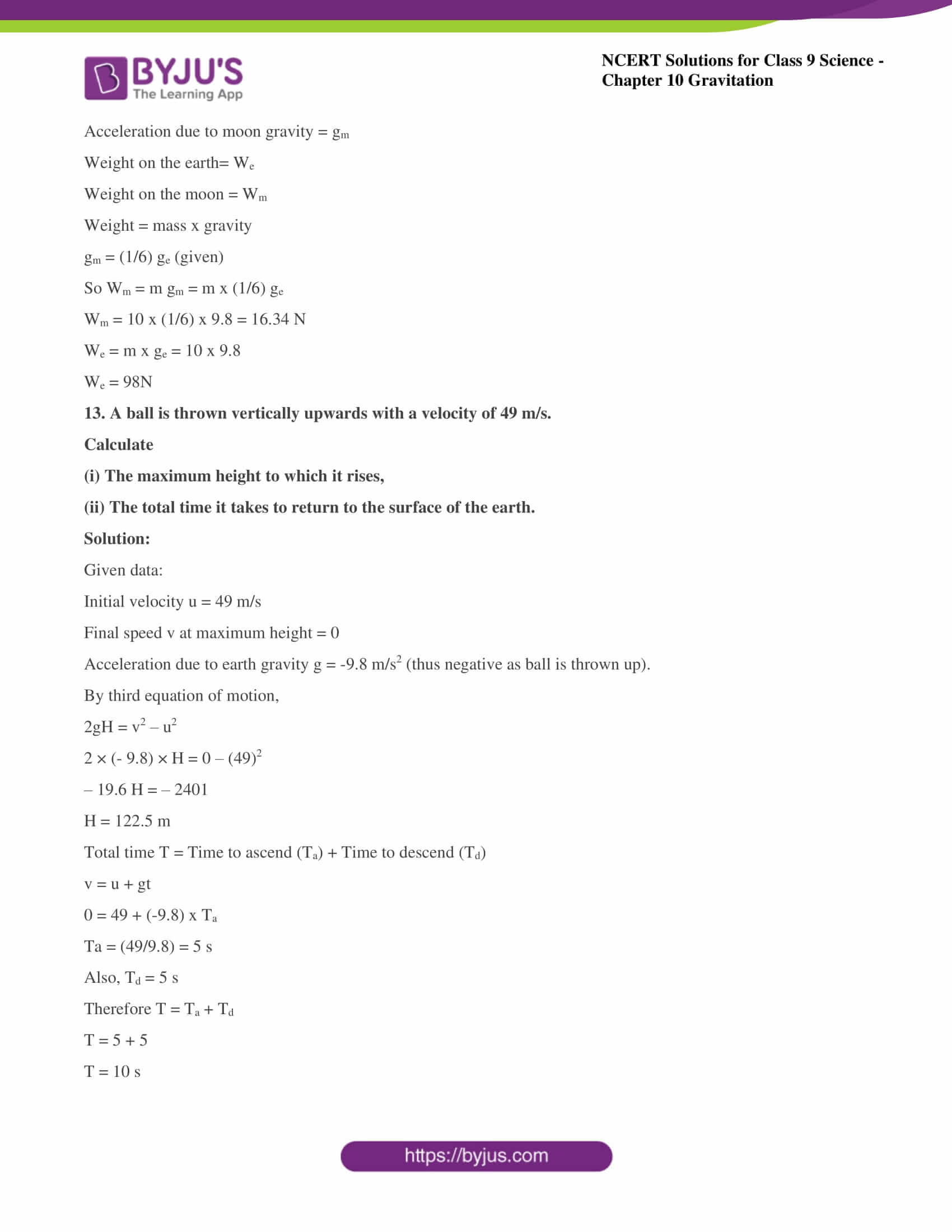 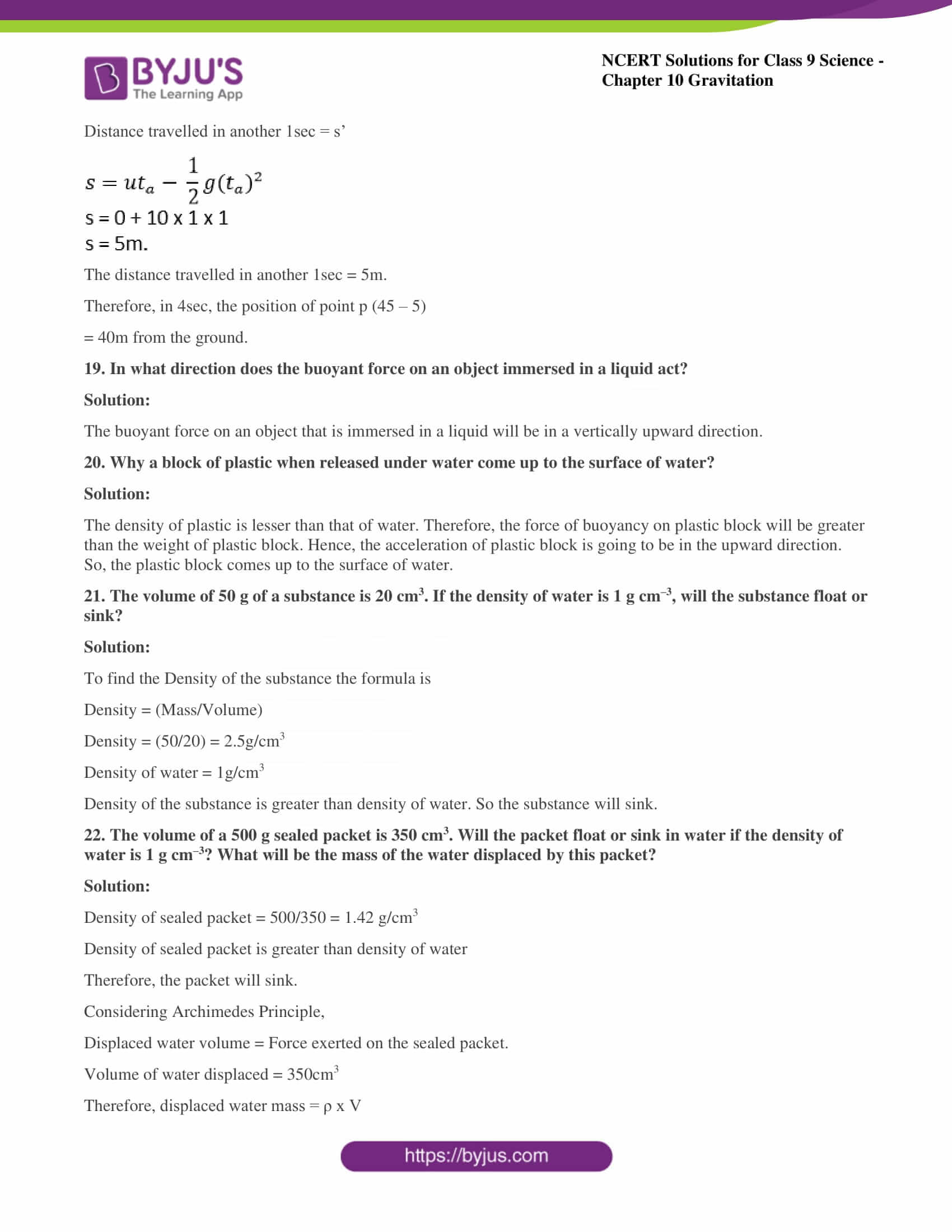 1. State the universal law of gravitation.

2. Write the formula to find the magnitude of the gravitational force between the earth and an object on the surface of the earth.

Therefore, the formula for the magnitude of the gravitational force between the earth and an object on the surface is given as

Earth’s gravity attracts each object to its center. When an object is dropped from a certain height, under the influence of gravitational force it begins to fall to the surface of Earth. Such an object movement is called free fall.

2. What do you mean by acceleration due to gravity?

When an object falls freely from a certain height towards the earth’s surface, its velocity keeps changing. This velocity change produces acceleration in the object known as acceleration due to gravity and denoted by ‘g’.

The value of the acceleration due to gravity on Earth is,

1. What are the differences between the mass of an object and its weight?

The differences between the mass of an object and its weight are tabulated below.

2. Why is the weight of an object on the moon 1/6th its weight on the earth?

1. Why is it difficult to hold a school bag having a strap made of a thin and strong string?

2. What do you mean by buoyancy?

The upward force possessed by a liquid on an object that’s immersed in it is referred to as buoyancy.

3. Why does an object float or sink when placed on the surface of water?

An object floats or sinks when placed on the surface of water because of two reasons.

(i) If its density is greater than that of water, an object sinks in water.

(ii) If its density is less than that of water, an object floats in water.

2. You have a bag of cotton and an iron bar, each indicating a mass of 100 kg when measured on a weighing machine. In reality, one is heavier than other. Can you say which one is heavier and why?

Therefore, in the presence of air, the cotton bag’s true weight is more compared to the true weight of the iron bar.

1. How does the force of gravitation between two objects change when the distance between them is reduced to half?

Consider the Universal law of gravitation,

According to that law, the force of attraction between two bodies is

m1 and m2 are the masses of the two bodies.

G is the gravitational constant.

r is the distance between the two bodies.

Given that the distance is reduced to half then,

Therefore once the space between the objects is reduced to half, then the force of gravitation will increase by fourfold the first force. 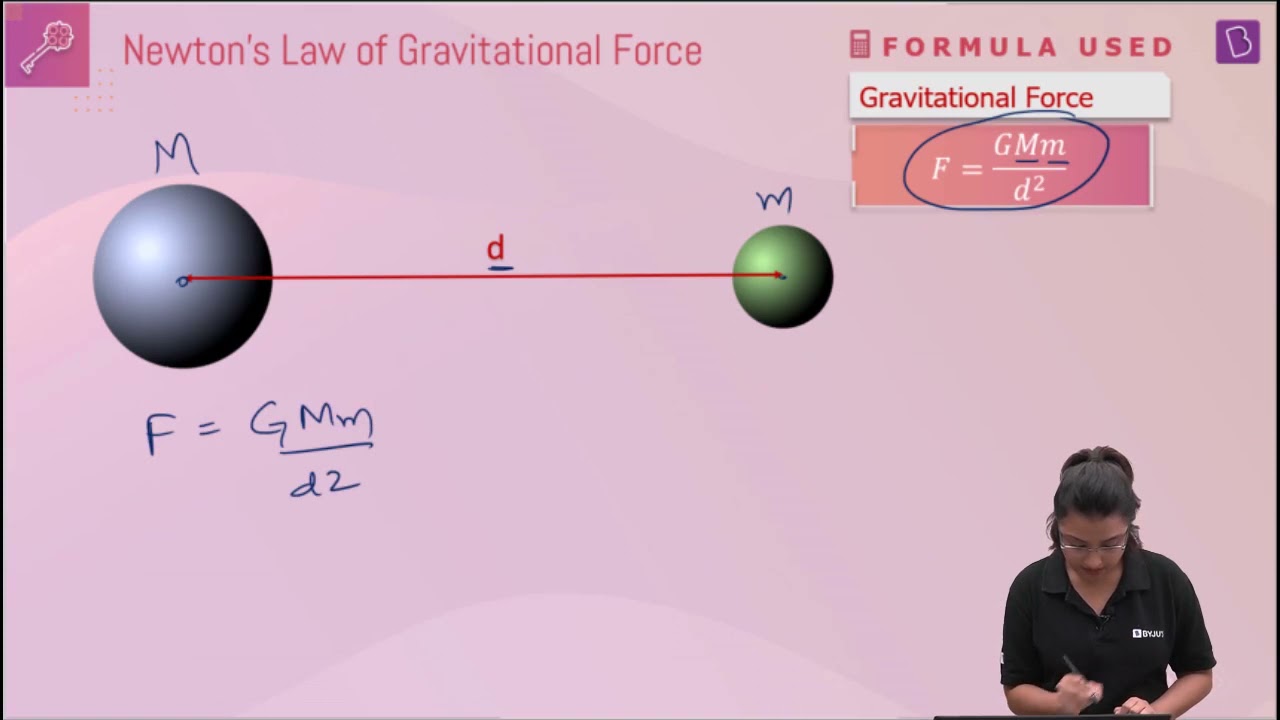 2. Gravitational force acts on all objects in proportion to their masses. Why then does a heavy object not fall faster than a light object?

All objects fall from the top with a constant acceleration called acceleration due to gravity (g). This is constant on earth and therefore the value of ‘g’ doesn’t depend on the mass of an object. Hence, heavier objects don’t fall quicker than light-weight objects provided there’s no air resistance.

From Newton’s law of gravitation, we know that the force of attraction between the bodies is given by 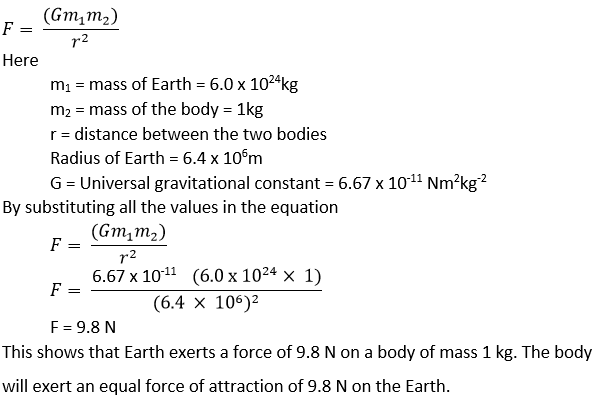 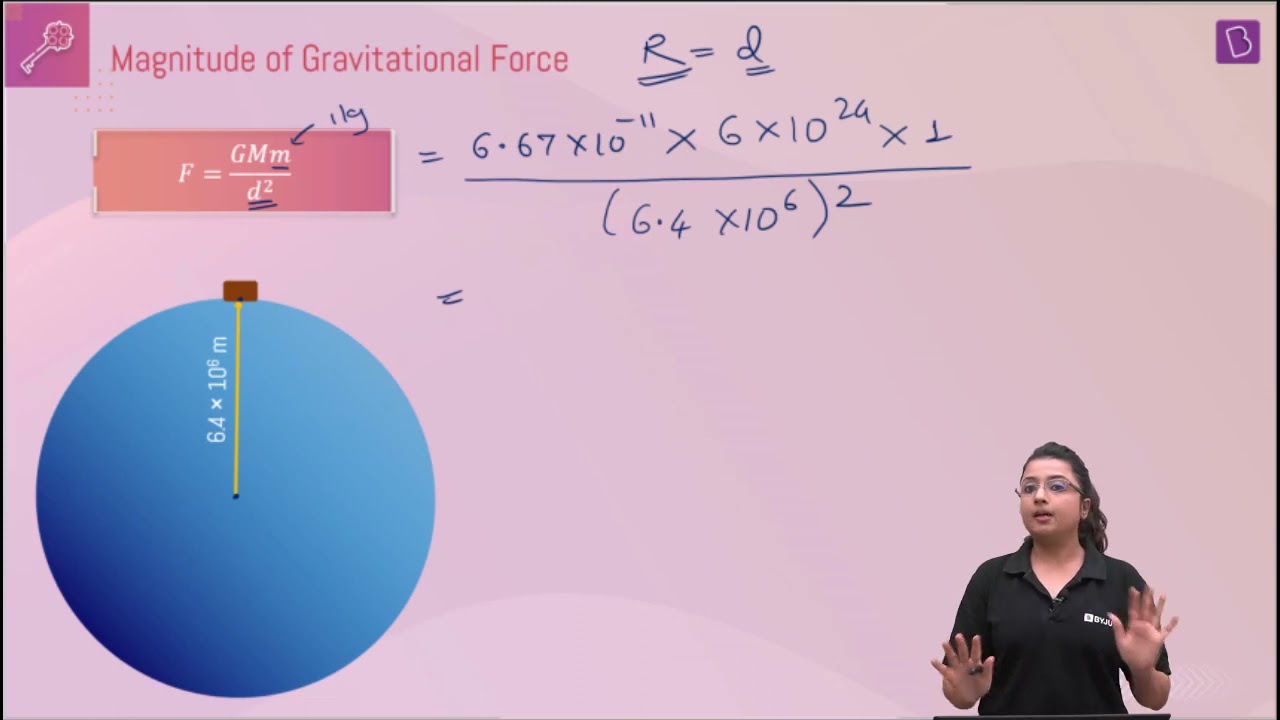 4. The earth and the moon are attracted to each other by gravitational force. Does the earth attract the moon with a force that is greater or smaller or the same as the force with which the moon attracts the earth? Why?

The earth attracts the moon with a force same as the force with which the moon attracts the earth. However, these forces are in opposite directions. By universal law of gravitation, the force between moon and also the sun can be

d = distance between the earth and moon.

m1 and m2 = masses of earth and moon respectively. 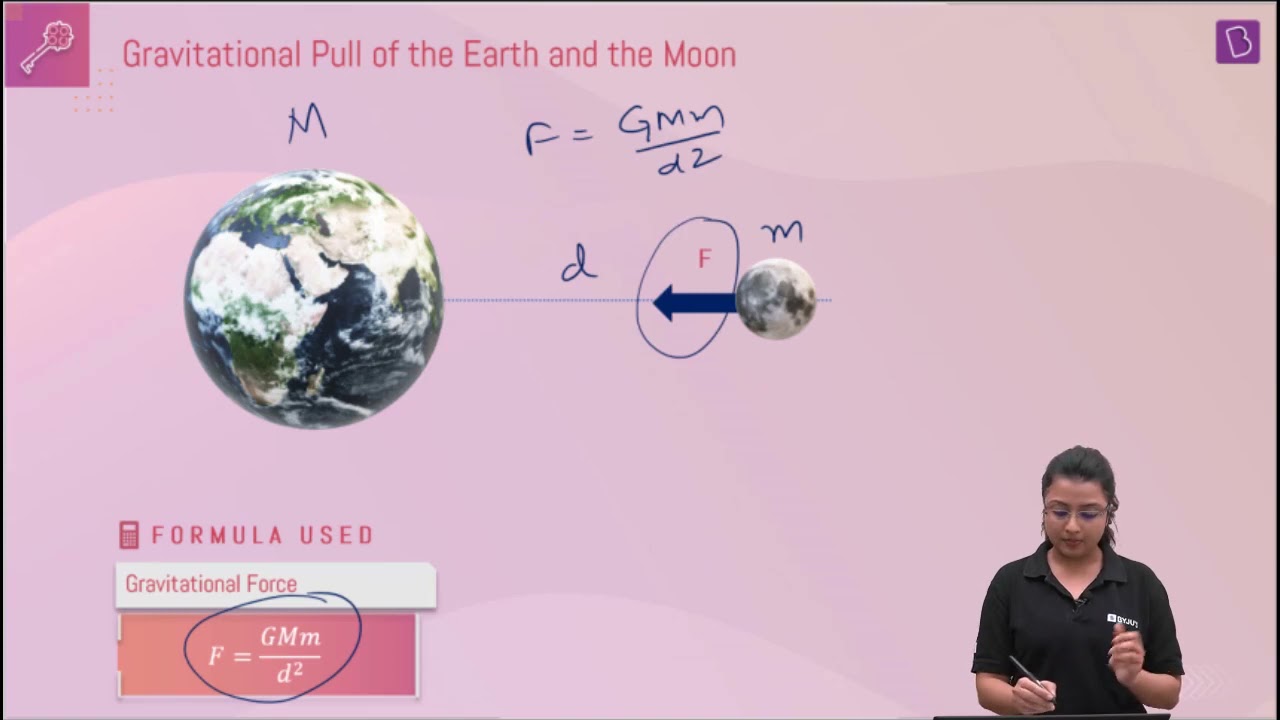 5. If the moon attracts the earth, why does the earth not move towards the moon?

According to the universal law of gravitation and Newton’s third law, we all know that the force of attraction between two objects is the same, however in the opposite directions. So the earth attracts the moon with a force same as the moon attracts the earth but in opposite directions. Since earth is larger in mass compared to that of the moon, it accelerates at a rate lesser than the acceleration rate of the moon towards the Earth. Therefore, for this reason the earth does not move towards the moon. 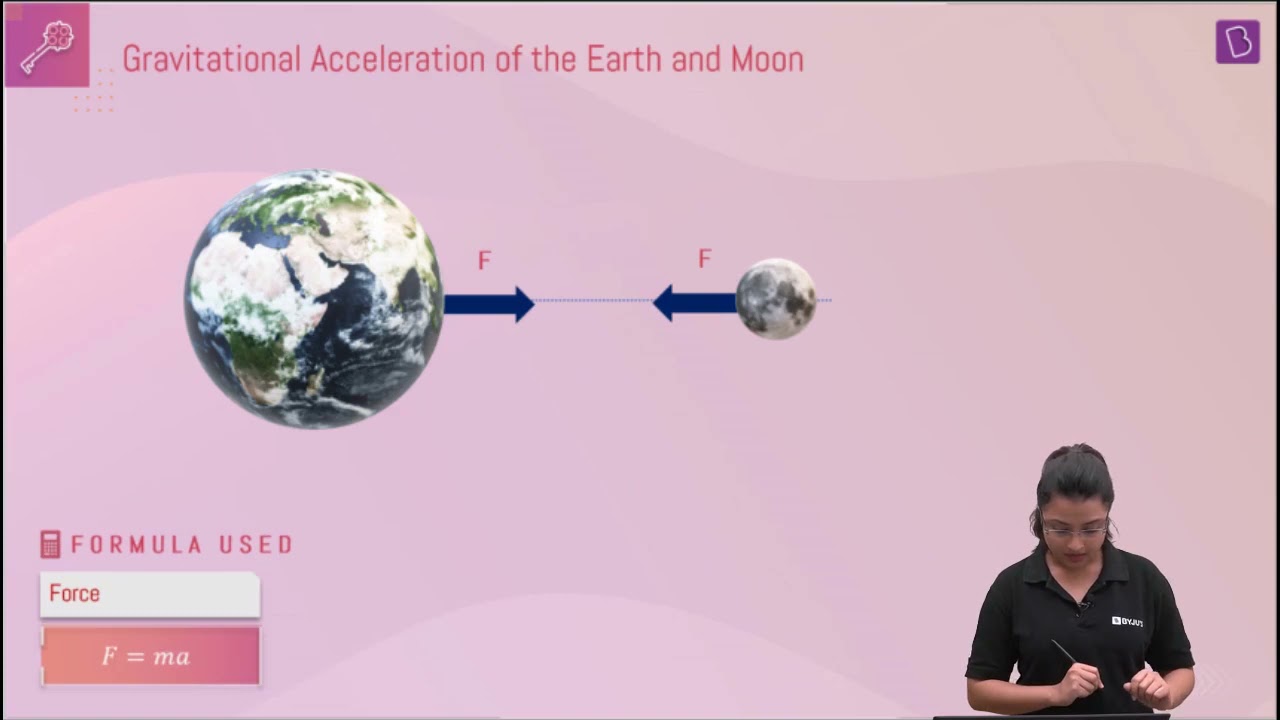 6. What happens to the force between two objects, if

(i) The mass of one object is doubled?

(ii) The distance between the objects is doubled and tripled?

(iii) The masses of both objects are doubled?

If the mass is doubled for one object.

If the distance between the objects is doubled and tripled

If masses of both the objects are doubled, then

F = 4F, Force will therefore be four times greater than its actual value.

7. What is the importance of universal law of gravitation?

The universal law of gravitation explains many phenomena that were believed to be unconnected:

(i) The motion of the moon round the earth

(iii) The tides because of the moon and therefore the Sun

(iv) The motion of planets round the Sun 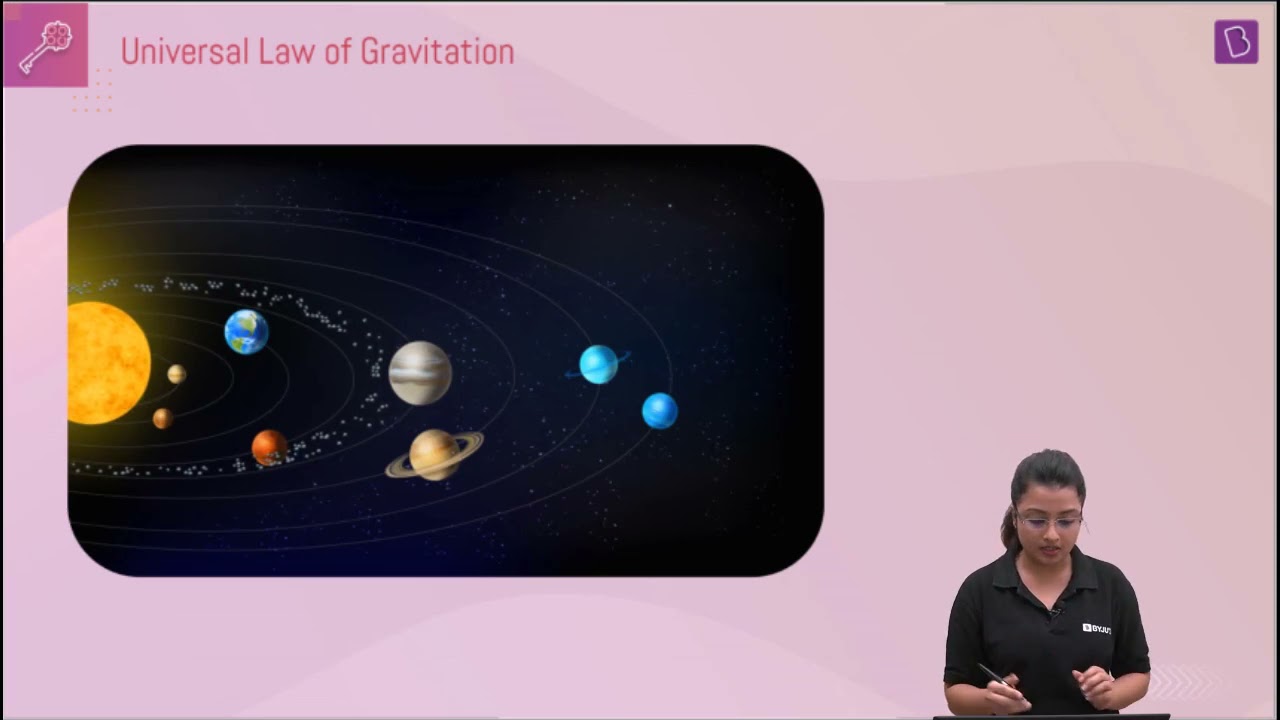 8. What is the acceleration of free fall?

9. What do we call the gravitational force between the earth and an object?

The gravitation force between the earth and an object is called weight. Weight is equal to the product of acceleration due to the gravity and mass of the object.

10. Amit buys few grams of gold at the poles as per the instruction of one of his friends. He hands over the same when he meets him at the equator. Will the friend agree with the weight of gold bought? If not, why? [Hint: The value of g is greater at the poles than at the equator.]

The weight of a body on the earth’s surface; 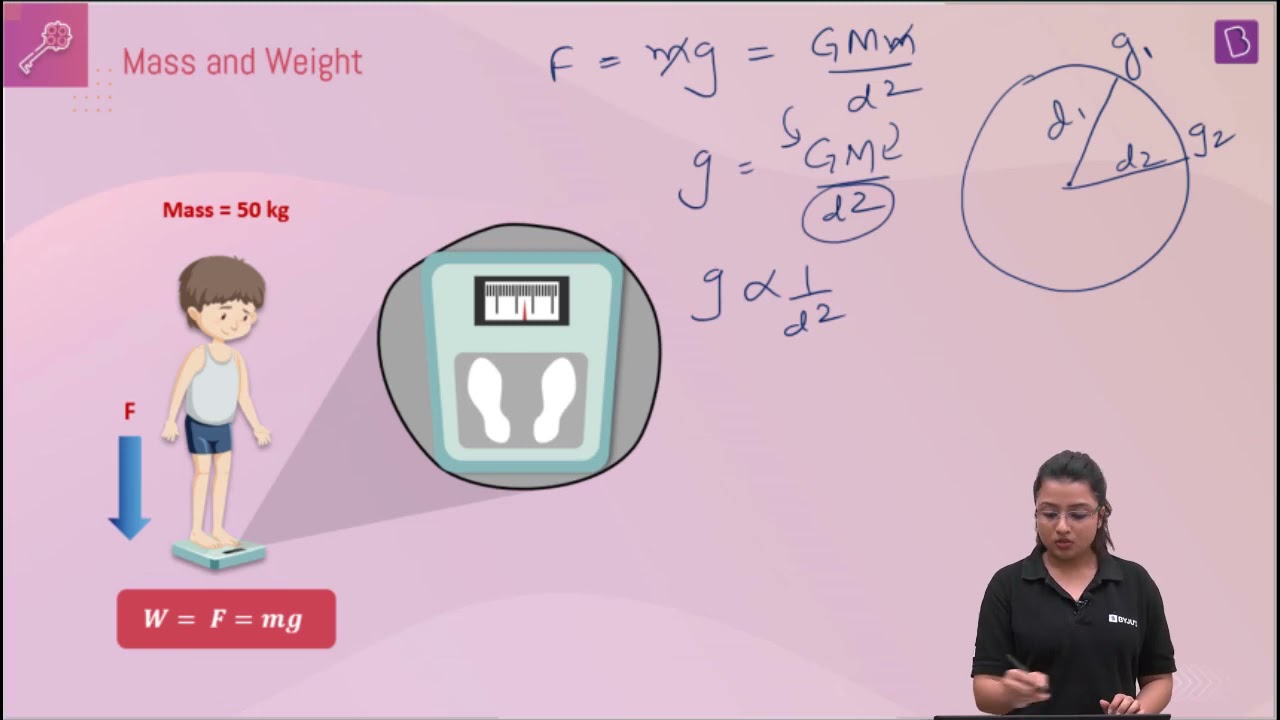 11. Why will a sheet of paper fall slower than one that is crumpled into a ball? 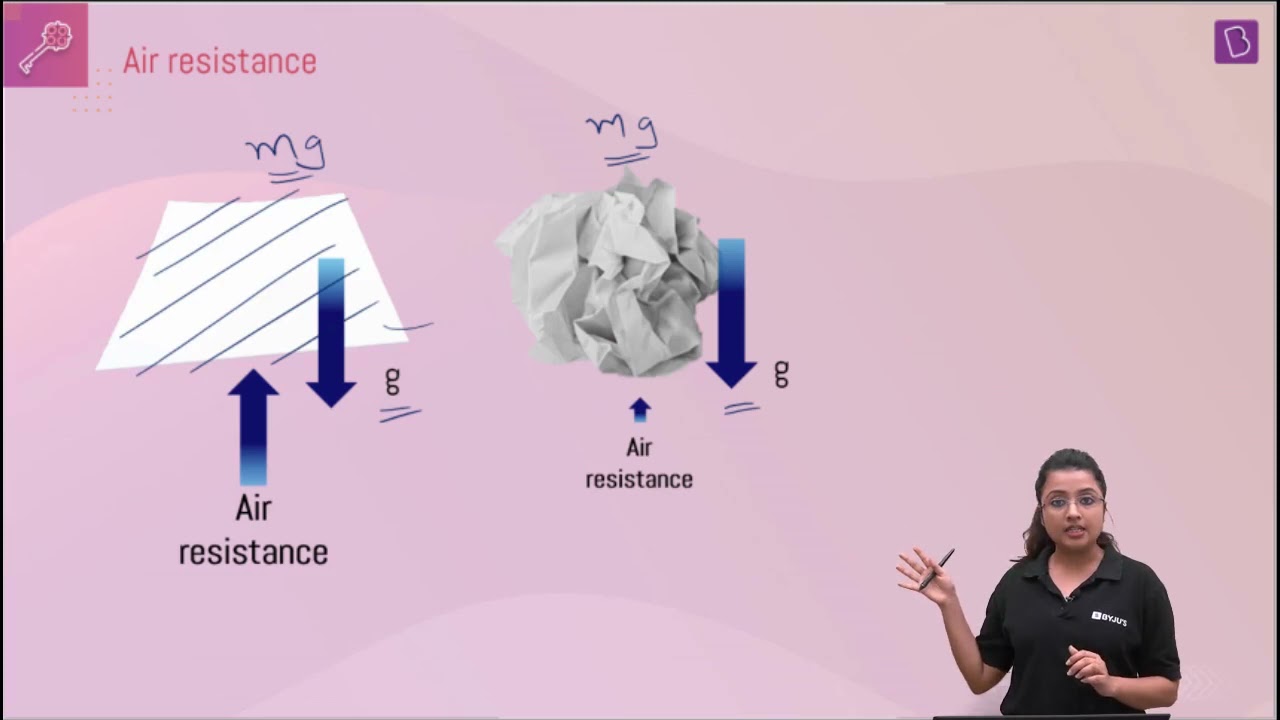 Acceleration due to moon gravity = gm

Weight on the earth= We

Weight on the moon = Wm 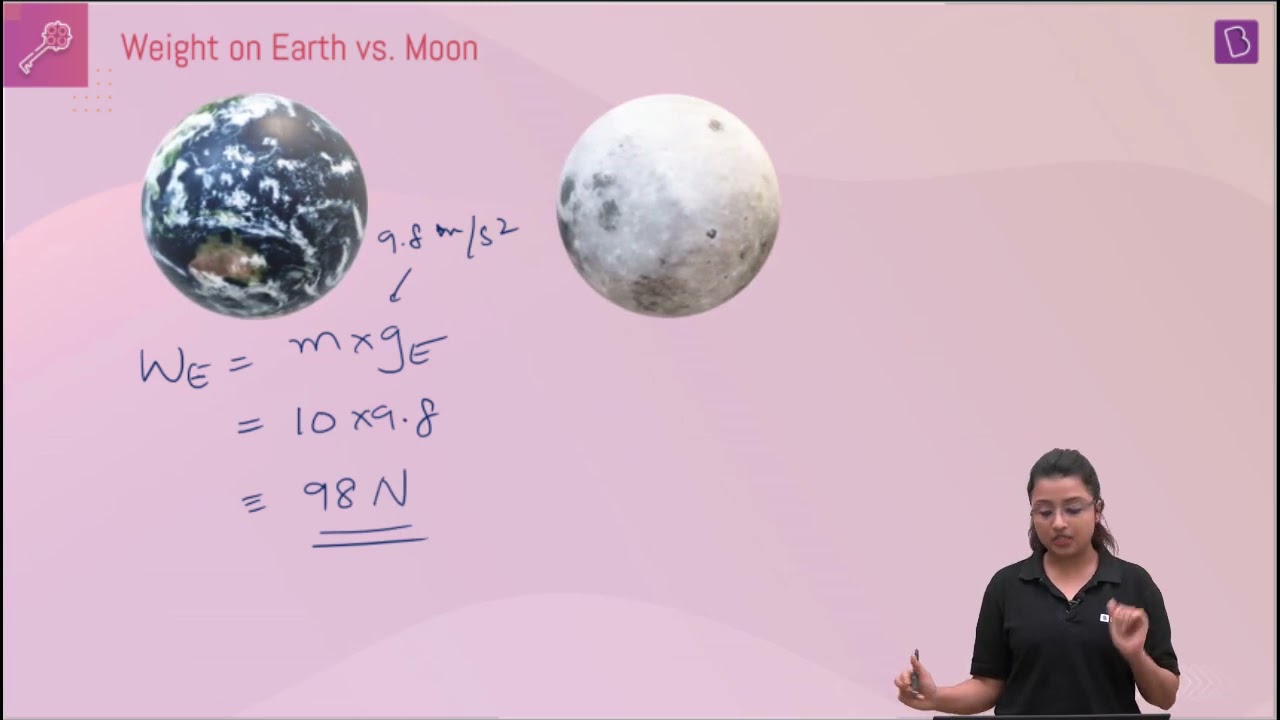 13. A ball is thrown vertically upwards with a velocity of 49 m/s.

(i) The maximum height to which it rises,

(ii) The total time it takes to return to the surface of the earth.

Acceleration due to earth gravity g = -9.8 m/s2 (thus negative as ball is thrown up).

By third equation of motion,

14. A stone is released from the top of a tower of height 19.6 m. Calculate its final velocity just before touching the ground.

15. A stone is thrown vertically upward with an initial velocity of 40 m/s. Taking g = 10 m/s2, find the maximum height reached by the stone. What is the net displacement and the total distance covered by the stone? 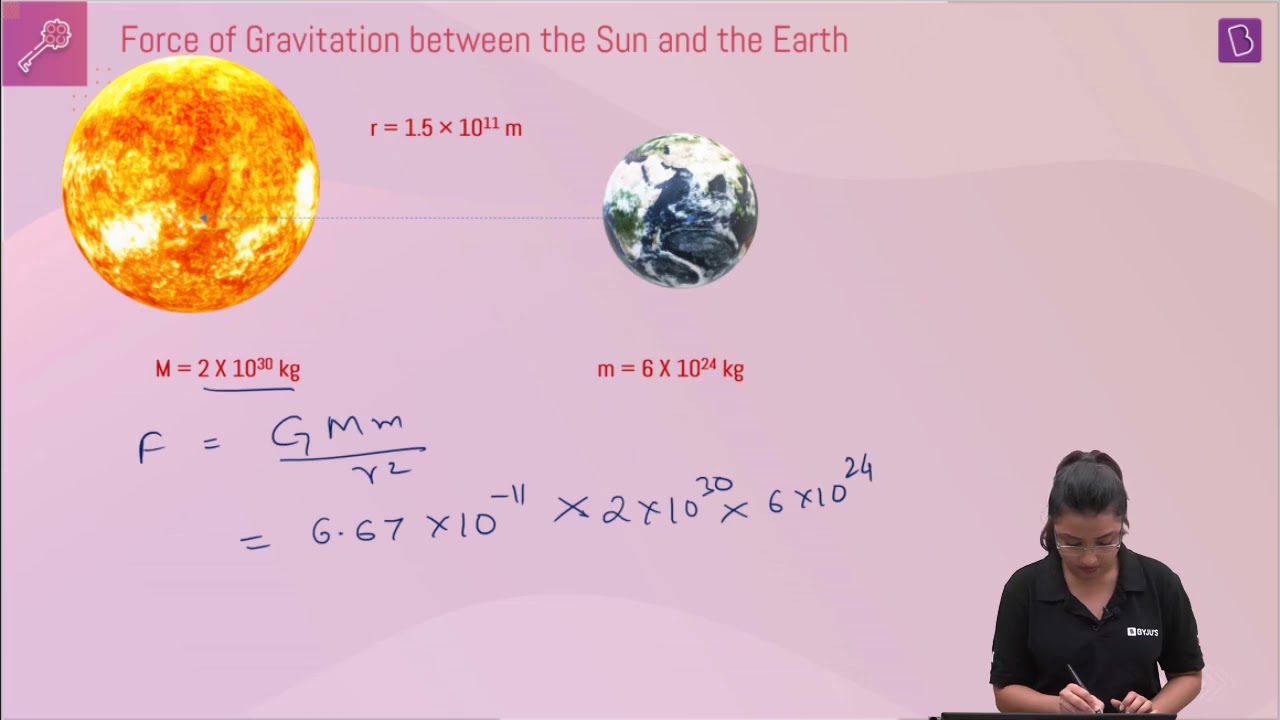 17. A stone is allowed to fall from the top of a tower 100 m high and at the same time another stone is projected vertically upwards from the ground with a velocity of 25 m/s. Calculate when and where the two stones will meet.

(i) When the stone from the top of the tower is thrown,

(ii) When the stone is thrown upwards,

After 4sec, two stones will meet

This means that after 4sec, 2 stones meet a distance of 20 m from the ground.

18. A ball thrown up vertically returns to the thrower after 6 s. Find

(a) The velocity with which it was thrown up,

(b) The maximum height it reaches, and

From first equation of motion:-

The velocity with which stone was thrown up is 30m/s.

(b) From second equation of motion

(c) In 3sec, it reaches the maximum height.

Distance travelled in another 1sec = s’

The distance travelled in another 1sec = 5m.

19. In what direction does the buoyant force on an object immersed in a liquid act?

The buoyant force on an object that is immersed in a liquid will be in a vertically upward direction.

20. Why a block of plastic when released under water come up to the surface of water?

To find the Density of the substance the formula is

22. The volume of a 500 g sealed packet is 350 cm3. Will the packet float or sink in water if the density of water is 1 g cm–3? What will be the mass of the water displaced by this packet?

Density of sealed packet is greater than density of water

Therefore the packet will sink.

Chapter 10 – Gravitation is a part of Unit 3 – Motion, Force and Work, which carries a total of 27 out of 100. Usually, 2 or 3 questions do appear from this chapter every year, as previous trends have shown.

The topics usually covered under this chapter are:

Often times, the term gravity and gravitation are used interchangeably and this is wrong. However, these two terms are related to each other but their implications are quite different. Academically, Chapter 10 – Gravitation is an important concept as it carries a considerable weightage in the CBSE Term II exam. Therefore, ensure that all relevant concepts, formulas and diagrams are studied thoroughly.

Explore how gravitation works at the molecular level, discover its applications and learn other related important concepts by exploring our NCERT Solutions.

Does the NCERT Solutions for Class 9 Science Chapter 10 help students to grasp the features of gravitational force?

The chapter 10 of NCERT Solutions for Class 9 Science is an important part in the syllabus. Students need to focus more on the classroom sessions and try to understand what the teacher is explaining during the class hours. The chapters must be studied unit wise and the students must clear their doubts instantly using the solutions available on BYJU’S. The new concepts are also explained in an interactive manner to help students grasp them without any difficulty.

How to solve the problems based on gravitation quickly in the Chapter 10 of NCERT Solutions for Class 9 Science?

Regular practice is the main key to remember the concepts efficiently. Students are advised to solve the problems present in the textbook and understand the method of answering them. If they possess any doubts regarding the problems, they can refer to the NCERT Solutions for Class 9 Science Chapter 10 from BYJU’S. The problems are solved in the most systematic way by keeping in mind the marks weightage allotted for each step in the CBSE exam.

Why should I use the NCERT Solutions for Class 9 Science Chapter 10 PDF from BYJU’S?

Science is one of the important subjects for Class 9 students as most of the concepts are continued in higher levels of education. For this purpose, obtaining a strong foundation of the fundamental concepts is important. Students are recommended to answer the textbook questions using the solutions PDF available on BYJU’S to gain a grip on the important concepts. The PDF of solutions can be downloaded and referred to understand the method of answering complex questions.