Find the sub-topics covered in the chapter and based on which the CBSE Class 10 Maths objective questions are formed.

Find from the link above the list of MCQs organized topic wise from the chapter 11 Constructions of CBSE Class 10 Maths.

11.2 Construction of Tangents to a Circle (3 MCQs Listed From The Topic)

11.3 Drawing Tangents to a Circle (3 MCQs From The Given Topic) 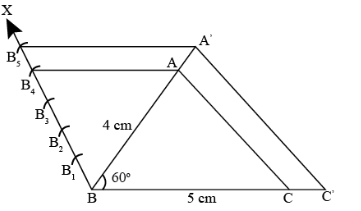 According to the construction, ΔBB4A∼ΔBB5A′

And for similar triangles, the ratio of corresponding sides is AB/A′B.

The ratio of corresponding sides is 4:5. 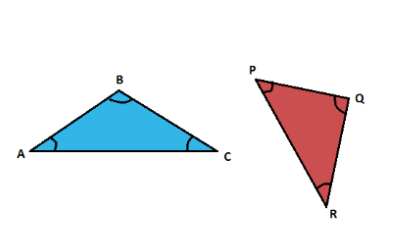 Solution: Consider we need to draw a triangle △PQR ~ △ABC. But △PQR is at an isolated position w.r.t. △ABC. Therefore we will need to know the perpendicular distance between AC and point P and the angle between AC and PR.

Now let us reframe the question with the required information.

3. Set the compass at 6 cm length and with A as centre mark the length on the line, name the point of intersection as B.

Reason: This is done to draw the line AB. i.e. we are marking the length of 6 cm on the line 30 o inclined to AC

4. Connect the points to BC to complete the triangle.

5. Draw a line perpendicular to AC at A.

Reason: We are drawing this step to identify the line on which the point P might lie.

6. For the given length of AP, cut the perpendicular at P Reason: We are drawing the arc to identify the exact position of point P on the line perpendicular to AC

9. Measure the distance AC with a compass and draw an arc with point P as centre and radius equal to AC, the point of intersection is R’.

10. Measure z.BAC and draw a similar angle on PR’.

14. Through P2 draw a line parallel to P3R′, let the point of intersection of the line with PR’ is R.

15. Through the point R, draw a line parallel to R’Q’. Let the point of intersection of the line with line PO! is Q. The triangle △PQR which is similar to &△ABC such that, the angle between PR and AC is 120 o and perpendicular distance of point P from AC is 5 cm. 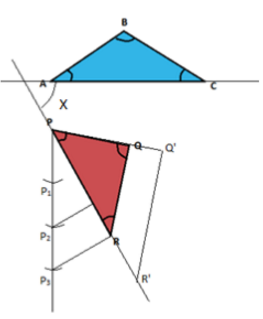 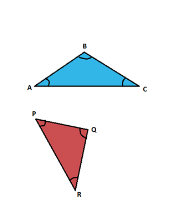 Solution: If the perpendicular distance of AP is given then, we would start the construction of similar triangle by finding the position of the point P. 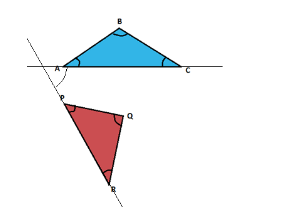 Solution: Scale factor basically defines the ratio between the sides of the constructed triangle to that of the original triangle.

When we have scale factor (m/n) =1, then the sides of both the constructed triangle and that of the original triangle is equal. 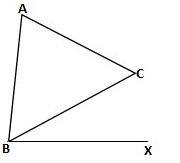 ⇒ The number of points to be marked on BX to construct similar triangles is 4.

Answer: (B) Find two points one on the larger side and other on the smaller side using the given scale factor and use these scaled lengths to construct a similar parallelogram.

The following steps will give you the information on how to construct a similar parallelogram to ABCD.

Step 2: Draw a line from E parallel to smaller side AD.

Step 3: Taking the length of AF and E as center cut an arc on the line parallel to AD and let this new point be G.

Step 5: AEFG is the required parallelogram.

Now we have constructed the parallelogram AEFG ∼ ABCD.

Construction of Tangents to a Circle Solution: Since the angle between the tangents is 60° and OE bisects ∠MEN, ∠MEO = 30°.

Recalling that ∠MOE = 60°, following are the steps of construction:

3. Now extend OM and from M, draw a line perpendicular to OM. This intersects the ray at E. This is the point from where the tangents should be drawn, EM is one tangent.

4. Similarly, EN is another tangent.

Solution: Since we need to draw a circle with radius ‘r’, we need the following points:

i) Centre of the smaller circle

ii) Radius of the smaller circle.

We have the radius ‘r’ but we need to adjust the centre on the line OA.

Realising that the tangents are common to both the circles, the radius of each circle at their point of contact being perpendicular to the common tangent, we can say that the radii are parallel. So we also have the ratio PQ: QO because we have a pair of similar triangles.

But before we can do all this, we first need to have the line AO and even before that, the point O. Only then we can draw tangents and then the inner circle. So the next step would be determining the point ‘O’.

Solution: Since we need to finally construct a circle of radius ‘R’ concentric to the previous circle, we need to determine the centre of these circles first, before proceeding with anything else.

Radius of the circle ‘D’ can be figured out after we get the radius of the first circle and using the centre.

Radius of the circle ‘C’ can be found after finding the centre of this circle.

Drawing Tangents to a Circle

Answer: (C) There are 2 tangents to the circle from point P

Solution: Only one tangent can be drawn from a point on the circle and the tangent is always perpendicular to the radius.

Solution: Since only one tangent can be drawn, this point P should be present on the circle. 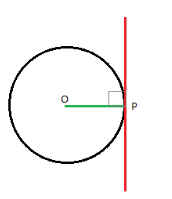 Solution: P is a point on the circle. We know that only one tangent can be drawn and it is perpendicular to the line joining the centre of the circle O and the point of contact P.

So our first step would be to join OP. 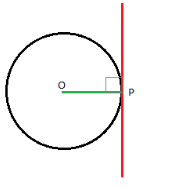 Solution: Here the total number of arcs is equal to m+n in the ratio m: n.

In the construction process given, triangles △AA12B   △AA6C are similar.

Similarity of triangles is the basic principle used in dividing a line segment.

In this case, similar triangles ACA3 and ABA5 have been constructed to divide the line segment AB.

Solution: The ratio of division must always be positive and rational. It can be greater than or less than 1.