Carbon And Its Compounds Class 10 MCQ

These MCQs are created by subject experts after thorough research on the exam pattern and question paper design. These questions cover the important concepts of the CBSE Class 10 Science Syllabus. To gain more command over this subject, students must solve the CBSE Sample Papers and previous year papers.

Q1) The electronic configuration of an element is found to be 2, 4. How many bonds can one carbon atom form in a compound?

Q2) The chemical reaction shows the addition of chlorine to methane in the presence of sunlight.

What is likely to be the product of the reaction represented by “X”?

Q3) The image represents the structure of a few hydrocarbon compounds. 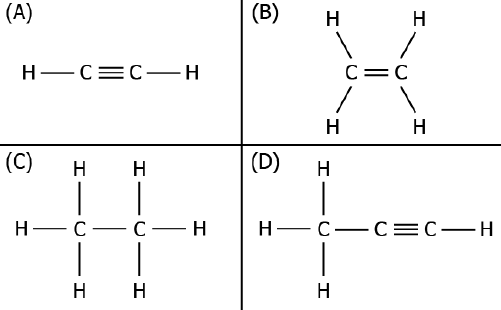 Which of these compounds can be classified as alkynes?

Which option represents the product “X”?

Q5) The image represents the structure of a carbon compound known as ethane. 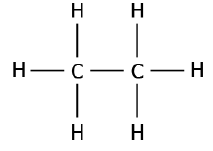 Which option explains the naming of ethane?

(a) the presence of functional group connected with a single bond

Which functional group is present in the compound?

Q8) The chemical reaction shows the addition of chlorine gas to hydrocarbon in the presence of sunlight.

How does chlorine react to a hydrocarbon compound in the presence of sunlight?

(a) it adds hydrogen into the compound

(b) it adds an oxygen atom into the compound

(c) it substitutes hydrogen atom from the compound

(d) it breaks double and triple bonds into a single bond

Q9) Which of these functional groups can combine with carbon to produce alcohol? 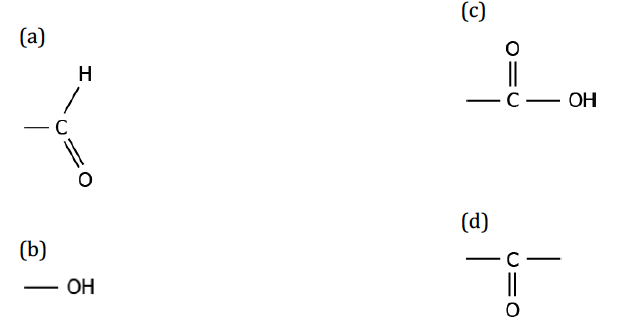 Q10) A student studies that vinegar, which is a diluted form of ethanoic acid, freezes during winter. What does this suggest about the physical properties of pure ethanoic acid?

(a) it has a low boiling point

(b) it has a low melting point

(c) it has a very high boiling point

(d) it has a very high melting point

Q11) Which of the following is the molecular formula of cyclobutane?

Q12) A student studies that a soap molecule has two ends, one of which is an ionic end and the other is the carbonic chain. Which option explains the interaction of a soap molecule with oil?

(a) ionic end of the soap interacts with the oil

(b) the closest end of the soap interacts with the oil

(c) carbonic chain end of the soap interacts with the oil

(d) ends of the soap randomly interact with the oil

Q13) Methane, ethane and propane are said to form a homologous series because all are-

(d) differ from each other by a CH2 group

Q14) Which of the following belongs to a homologous series of alkynes?

Q15) A student studies that soap solution results in micelle formation which helps to remove dirt. It has a unique orientation which helps in keeping the dirt out of the water as shown in the image. 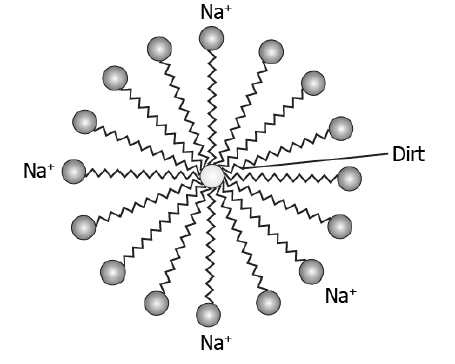 What helps the dirt to rise away?

(a) suspension of the dirt in the micelles

(a) The ethene molecule is made up of 2 carbon atoms and 4 hydrogen atoms.

(c) In ethane, the two carbon atoms share one pair of electrons among themselves to form one carbon-carbon single covalent bond.

Q17) Following is (are) the property(ies) of ionic compounds.

(a) They have high melting and boiling points

(b) They conduct electricity in solution or in molten state

Q18) Which of the following is not a characteristic of fullerenes?

(a) Of all the fullerene, C60 allotrope is the most stable.

(b) Its shape is similar to that of a soccer ball.

(d) Its hardness is lower than that of diamond.

Q19) How many single bonds are present in methane?

Q20) A hydrocarbon should have a minimum of how many carbon atoms to show isomerism?

Frequently Asked Questions on Carbon And Its Compounds

How many covalent bonds are there in a molecule of ethane?

The molecule of ethane has 7 covalent bonds.

What is meant by saturated hydrocarbons?

The hydrocarbons in which the valency of carbon is satisfied by single bonds only are called saturated hydrocarbons.

What is common in all the members of a family carbon and its compound?

They have the common functional group.

We hope students have found this information on “CBSE Class 10 Science MCQ Chapter 4 Carbon And Its Compounds” useful for their exam preparation. Keep learning and stay tuned for further updates on the CBSE Exam. Download BYJU’S App and subscribe to the YouTube channel to access interactive study videos.