Earth is the third planet from the sun and the only planet to have an atmosphere containing free oxygen, oceans of water on its surface and life. In the solar system, Earth is the fifth largest of the planets. The Sun, the eight planets and their moons, smaller planetary objects such as dwarf planets, comets and meteoroids together make up our solar system. In this article, we have compiled NCERT Solutions for Class 6 Social Science, which contains the solutions to the exercise given in the textbook of Geography. These solutions are easy to understand and will prepare you for the upcoming exam.

Chapter 1 The Earth in the Solar system

NCERT Solutions for Class 6 Geography (The Earth: Our Habitat) Chapter 1 The Earth in the Solar System 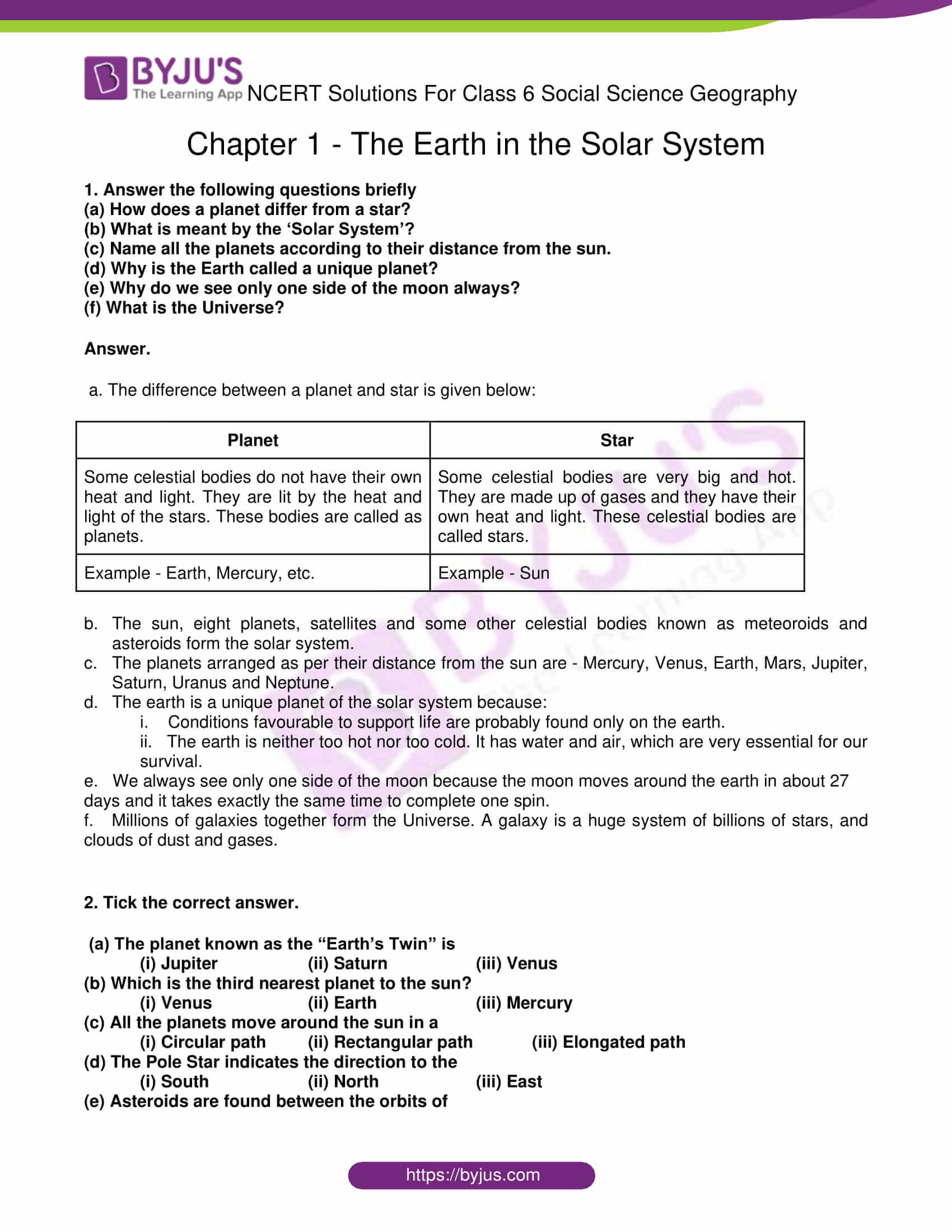 Students should also check NCERT Solutions for Class 6 for other subjects.

(a) How does a planet differ from a star?

(b) What is meant by the ‘Solar System’?

(c) Name all the planets according to their distance from the sun.

(d) Why is the Earth called a unique planet?

(e) Why do we see only one side of the moon always?

(f) What is the Universe?

(a) The difference between a planet and a star is given below:

b)The sun, the eight planets, satellites and some other celestial bodies known as meteoroids and asteroids form the solar system.

c) The planets arranged as per their distance from the sun are – Mercury, Venus, Earth, Mars, Jupiter, Saturn, Uranus and Neptune.

d)The earth is a unique planet of the solar system because:

e)We always see only one side of the moon, because the moon moves around the earth in about 27 days and it takes exactly the same time to complete one spin.

f)Millions of galaxies together form the Universe. A galaxy is a huge system of billions of stars and clouds of dust and gases.

(a) The planet known as the “Earth’s Twin” is

(b) Which is the third nearest planet to the sun ?

(c) All the planets move around the sun in a

(d) The Pole Star indicates the direction to the

(e) Asteroids are found between the orbits of

(a) A group of stars forming various patterns is called a constellation.

(b) A huge system of stars is called a galaxy.

(c) Moon is the closest celestial body to our earth.

(d) Earth is the third nearest planet to the sun.

(e) Planets do not have their own heat and light.

The Earth in the Solar System Summary

The NCERT Class 6 Geography The Earth: Our Habitat Chapter 1 has the following topics: