Faraday’s Laws of Electromagnetic Induction consists of two laws. The first law describes the induction of emf in a conductor and the second law quantifies the emf produced in the conductor. In the next few sections, let us learn these laws in detail.

Whenever a conductor is placed in a varying magnetic field, an electromotive force is induced. If the conductor circuit is closed, a current is induced, which is called induced current.

Changing the Magnetic Field Intensity in a Closed Loop

Mentioned here are a few ways to change the magnetic field intensity in a closed loop:

The induced emf in a coil is equal to the rate of change of flux linkage.

The flux is the product of the number of turns in the coil and the flux associated with the coil. The formula of Faraday’s law is given below:

Where ε is the electromotive force, Φ is the magnetic flux, and N is the number of turns.

The German physicist Heinrich Friedrich Lenz deduced a rule known as Lenz’s law that describes the polarity of the induced emf.

Lenz’s law states that “The polarity of induced emf is such that it tends to produce a current which opposes the change in magnetic flux that produced it.”

Consider a magnet approaching towards a coil. Consider two-time instances T1 and T2.

Change in the flux linkage is given by

Let us consider this change in flux linkage as

Hence, the change in flux linkage is given by

The rate of change of flux linkage is given by

Taking the derivative of the above equation, we get

According to Faraday’s second law of electromagnetic induction, we know that the induced emf in a coil is equal to the rate of change of flux linkage. Therefore,

From the above equation, we can conclude the following

Learn more about Faraday’s Law of induction and the relationship between the electric circuit and magnetic field by watching this engaging video from BYJU’S. 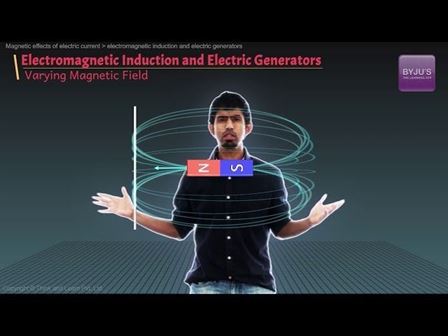 Summarising the above points in a table, we have mapped out the relationship between the position of the magnet and the deflection in the Galvanometer.

After conducting all the experiments, Faraday finally concluded that if relative motion existed between a conductor and a magnetic field, the flux linkage with a coil changed and this change in flux produced a voltage across a coil.

Faraday law basically states, “when the magnetic flux or the magnetic field changes with time, the electromotive force is produced”. Additionally, Michael Faraday also formulated two laws on the basis of the above experiments.

Following are the fields where Faraday’s law finds applications:

Faraday’s first law of electromagnetic induction states that “Whenever a conductor is placed in a varying magnetic field, an electromotive force is induced. Likewise, if the conductor circuit is closed, a current is induced, which is called induced current.”

What does Faraday’s Second Law of Electromagnetic Induction state?

Faraday’s first second law of electromagnetic induction states that the induced emf in a coil is equal to the rate of change of flux linkage.

Why are Faraday’s laws important?

Faraday’s law describes how changing magnetic fields can cause current to flow in wires.

What does negative sign indicate in Faraday’s law of electromagnetic induction formula?

What is meant by EMF?

Electromotive force or emf is a measurement of the energy that causes current to flow through a circuit.