Doppler effect or Doppler shift is a phenomenon that is observed whenever the source of waves is moving with respect to an observer. For example, an ambulance crossing you with its siren blaring is a common physical demonstration of the Doppler Effect. In this article, let us understand the intricacies of the Doppler effect in detail.

Doppler effect is an important phenomenon in various scientific disciplines, including planetary science. The Doppler effect or the Doppler shift describes the changes in the frequency of any sound or light wave produced by a moving source with respect to an observer.

Doppler effect in physics is defined as the increase (or decrease) in the frequency of sound, light, or other waves as the source and observer move towards (or away from) each other.

Let us imagine the following scenario:

Case 1: Two people A and B, are standing on the road, as shown below in the picture. 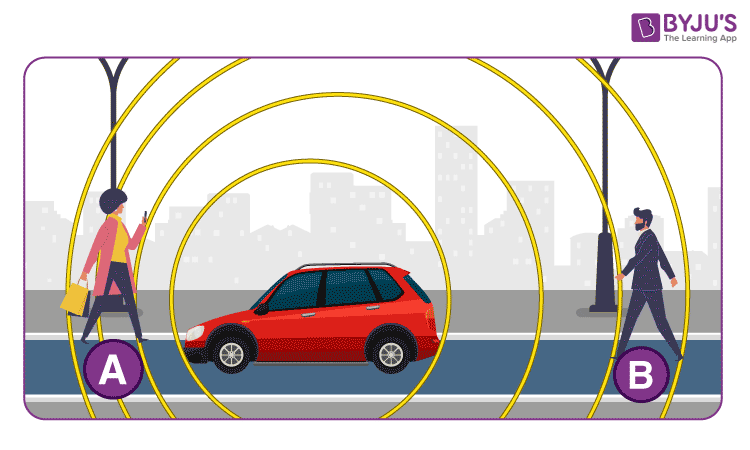 Which person hears the sound of the revving engine with a greater magnitude?

Person A hears the sound of the revving engine with a greater magnitude than person B. Person B, standing behind the car, receives fewer waves per second (because they’re spread out), resulting in a low-pitched sound. But, person A who is in front of the car, receives more of those soundwave ripples per second. As a result, the frequency of the waves is higher, which means the sound has a higher pitch.

The image given below highlights the difference between wave patterns in both situations.

The difference in the wave pattern is due to the source’s movement in the second case. This is what the Doppler effect is. In the Doppler effect, the frequency received by the observer is higher during the approach, identical when the relative positions are the same, and keeps lowering on the recession of source.

In this video let’s see how relative motion between the source and the observer changes the frequency of sound waves giving rise to Doppler Effect. 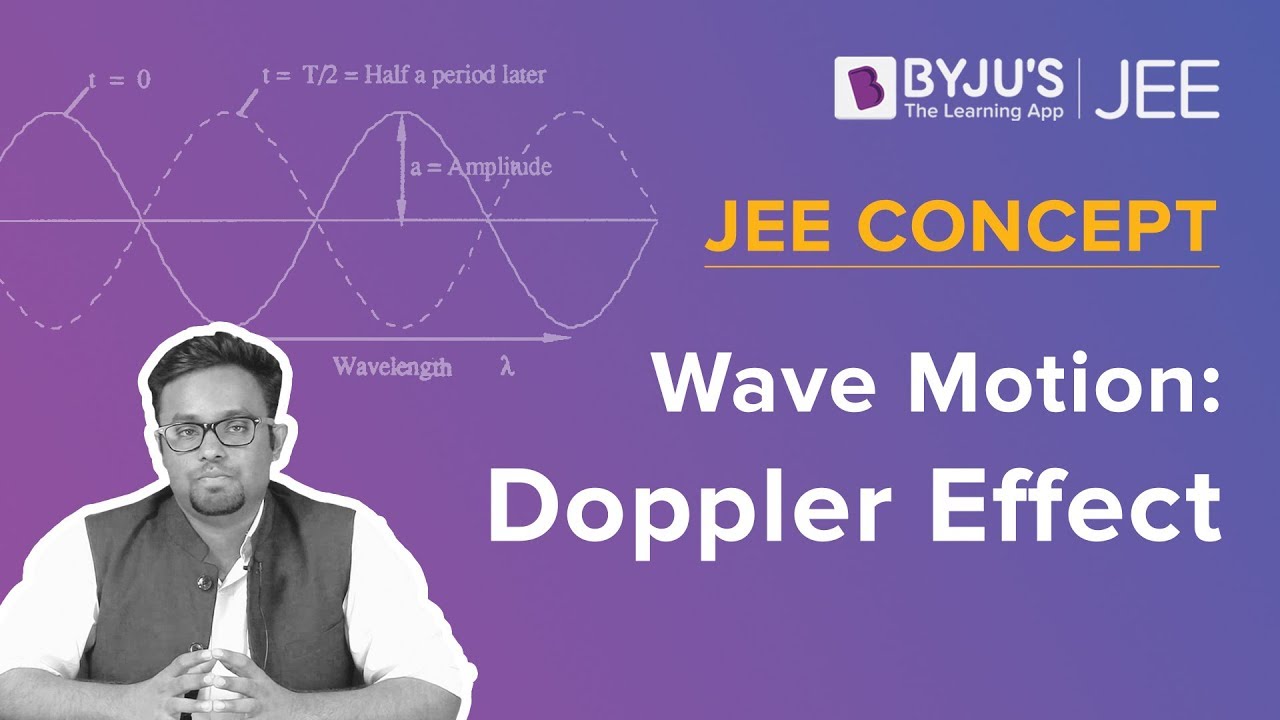 (a) Source Moving Towards the Observer at Rest

(b) Source Moving Away from the Observer at Rest

Since the velocity of the observer is zero, we can eliminate vo from the equation. But this time, the source moves away from the observer, so its velocity is negative to indicate the direction. Hence, the equation now becomes as follows:

In this case, vs will equal to zero, hence we get the following equation:

(d)Observer Moving Away from a Stationary Source

The source and the observer are moving towards each other, hence.

2. A bike rider approaching a vertical wall observes that the frequency of his bike horn changes from 440 Hz to 480 Hz when it gets reflected from the wall. Find the speed of the bike if the speed of sound is 330 m/s.

Let the bike approach the wall with speed u.

For the reflected wave,

Let us see more solved examples in the video given below 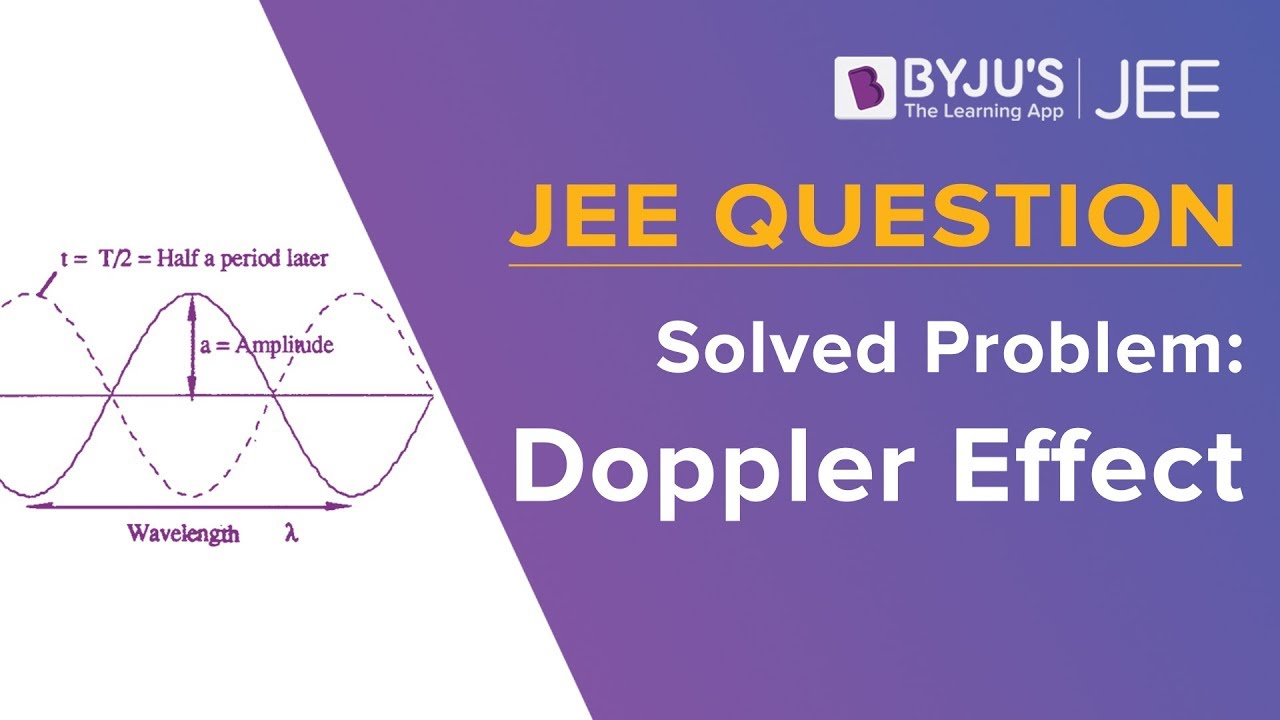 Many mistake the Doppler effect to be applicable only for sound waves. It works with all types of waves including light. Below, we have listed a few applications of the doppler effect:

Doppler effect of light can be described as the apparent change in the frequency of the light observed by the observer due to relative motion between the source of light and the observer.
For sound waves, however, the equations for the Doppler shift differ markedly depending on whether it is the source, the observer, or the air, which is moving. Light requires no medium, and the Doppler shift for light travelling in a vacuum depends only on the relative speed of the observer and source. 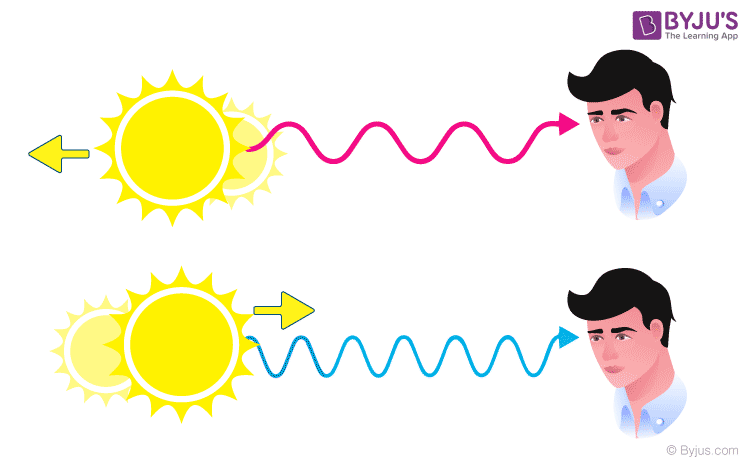 What is the Doppler Effect in Physics?

Doppler Effect in physics refers to the change in wave frequency during the relative motion between a wave source and its observer.

Who discovered the Doppler Effect?

Christian Johann Doppler, an Austrian mathematician and physicist discovered the Doppler effect in 1842.

Can Doppler effect be observed in both longitudinal and transverse waves?

How can the Doppler Effect be applied to everyday life?

A few daily life examples of Doppler effect are: a) When you stand beside a police radar. b) The Doppler effect is used by meteorologists to track storms. c) Doctors use the Doppler Effect in hospitals to diagnose heart problems. d) Traffic police make use of doppler effect a radar gun to check the speed of the oncoming vehicles.

Why is the Doppler Effect used in hospitals?

Why is the Doppler Effect used in hospitals?

Doppler effect in hospitals is used to monitor the blood flow. It also measures the direction and speed of blood flow. Blood clots are also detected with the Doppler effect as the ultrasound will detect slower blood flow where the clot is located.

How does the Doppler Effect prove that the universe is expanding?