Visible light waves are a form of electromagnetic radio waves such as infrared radiation, X-rays, microwaves, and ultraviolet radiation. We can see these waves as the colours of the rainbow where each colour includes a different wavelength. Red has the longest wavelength and violet has the shortest one. When all the waves are seen together, they form white light. When white light comes through the prism, it gets broken into the colours of the visible light spectrum.

EM radiation can be transmitted in waves or particles at different frequencies and wavelengths. This wide variety of wavelengths is known as the electromagnetic spectrum.

What Is the Visible Light Spectrum?

The portion of the electromagnetic spectrum that is visible to the human eye is known as the visible light spectrum. Visible light range comes under the range of EM spectrum between infrared and ultraviolet, having a frequency of about 4 x 10 14 to 8 x 10 14 cycles per second and wavelengths of about 740 nanometres or 2.9 x10 -5 inches to 380 nm. 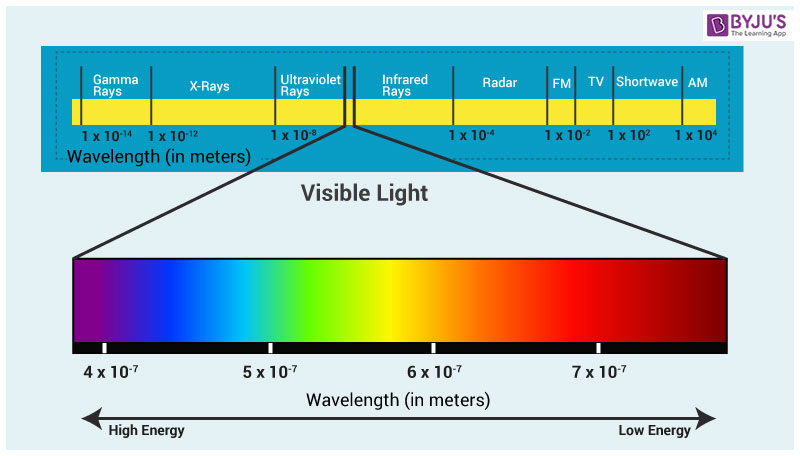 The most important characteristics of visible light are colour which is both an inherent property of light and an artifact of the human eye. Our eyes include specialized cells known as cones. These cones act as receivers that are tuned to the wavelength of the narrowband of the EM spectrum. Light at the lower end of the visible spectrum has a longer wavelength of about 740 nm. It is seen as red, green in the middle, and violet at the upper end of the spectrum having a wavelength of about 380 nm.

As the object gets hotter with the temperature, they radiate energy which is dominated by shorter wavelengths by changing its colour before our eyes. For instance, a blow torch turns bluish from reddish as it is adjusted to burn hotter. The sun produces yellow light more than any other colour as its surface temperature is 5,500°C. If the sun’s surface is cooler, 3,000°C then it would look reddish. If the Sun is hot, 12,000°C then it would look blue.

You may want to check out the following video for a better understanding of the characteristics of UV, IR and visible light and how they vary from each other 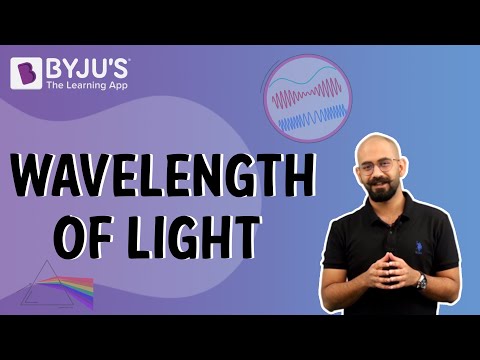 What is the visible spectrum?

The visible light spectrum is the segment of the electromagnetic spectrum that the human eye can view.

What are the colours present in the visible spectrum?

What is the phenomenon of splitting of white light into seven colours called?

Which colour has the longest wavelength?

Red light has the longest wavelength.

Which colour has the shortest wavelength?

Violet light has the shortest wavelength.