When we look at a leaf we know that it is green because light bounces off the leaf to our eyes to tell us that it is green. But what is light? Which are the sources of light from which light originated? Light is electromagnetic radiation. A particular frequency of this radiation (around 390-700 nm) is visible to the human eye. Everything that we see around us is because of light. Light is a form of energy and like all energies, it is produced from a source. In Physics, these are called light sources.

There are countless sources of light, but they can all be categorized under either of the two following categories- 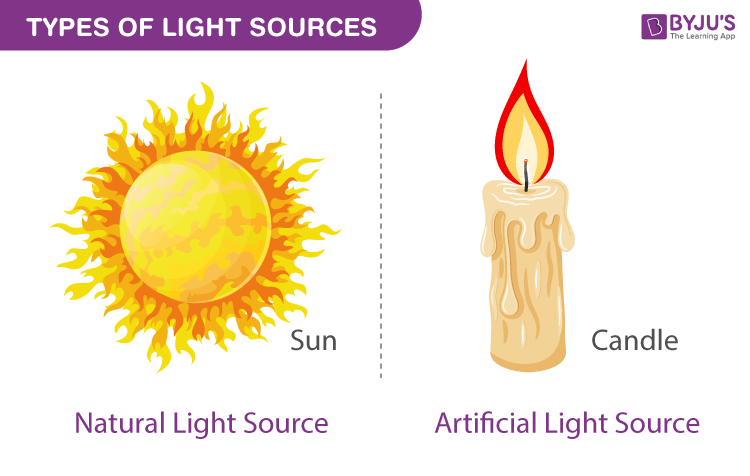 The universe is filled with objects that emit light. Some light from these sources reaches the earth. The following things in nature have the ability to emit light:

When certain objects are heated to a high temperature, they begin to emit light. Both infrared and visible light is produced in the process.

Light can be produced by accelerating charges in a luminescent material. One common way of doing it is by passing current through the material.

Passing electricity through certain gases at very low pressure can produce light too.

How many light sources are there?

There are countless sources of light, but they can all be categorised under either of the two following categories-

What are incandescent light sources?

When certain objects are heated to a high temperature, they begin to emit light. Both infrared and visible light is produced in the process.
Example- Candle, incandescent lamp.

The change in direction of a wave, while passing from one medium to another is known as refraction.

Light is a form of energy that enables us to see things. Light starts from a source and bounces off objects which are perceived by our eyes and our brain processes this signal, which eventually enables us to see.

Give a daily life example of the refraction of light.

Twinkling of stars and formation of rainbow.

Stay tuned with BYJU’S to learn more about light sources, electromagnetic radiation, and much more.