In Physics, oscillation is a repetitive variation, typically in time. It is measured between two or more different states or about equilibrium or about a central value. Some familiar examples of oscillations include alternating current and simple pendulum. Some parameters governing oscillation are:

In general, an oscillation is a back and forth movement in a regular rhythm. In this article, let us discuss oscillation in detail.

Oscillation is the regular variation in position or magnitude about a central point or about a mean position.

The commonly used unit for the number of oscillations per second is the Hertz. Oscillations in Physics are quantified using parameters such as – Frequency, Amplitude, and period. Each term is explained as follows-

How is Oscillation Calculated?

The formula for parameters governing oscillations in Physics are listed below-

It is the simplest form of oscillatory motion which all of us come across in our day-to-day life. It is an oscillatory motion in which retarding force is proportional to the amount of displacement of an object from an equilibrium position. Or in other words, the restoring force acts in the direction opposite to that of displacement of the object and is proportional to it.

Again, the motion of a simple pendulum is a perfect example of this, where if it is displaced in one direction, the restoring force acts in the opposite direction. Any simple harmonic motion can be categorized into three types of oscillation. 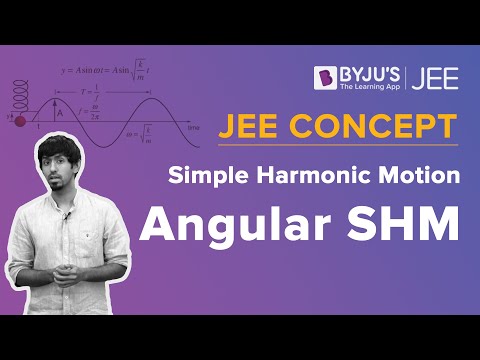 There are three main types of Simple Harmonic Motion

When a body oscillates by being influenced by an external periodic force, it is called forced oscillation. Here, the amplitude of oscillation, experiences damping but remains constant due to the external energy supplied to the system.

For example, when you push someone on a swing, you have to keep periodically pushing them so that the swing doesn’t reduce.

Q 1) Can a motion be oscillatory but not simple harmonic? Explain with valid reason.

Ans: Yes.
Consider an example of a ball dropping from a height on a perfectly elastic surface. The type of motion involved here is oscillatory but not simple harmonic as restoring force F=mg is constant and not F∝−x, which is a necessary condition for simple harmonic motion.

Q 2) What is the basic condition for the motion of a particle to be a simple harmonic motion?

Ans: The restoring force acting on it is proportional to its displacement from the mean position. That is, F=−kx.

Q 3) What happens to the oscillation of the body in damped oscillation?

Ans: The oscillation of the body decreases with time.

Q 4) What is free oscillation?

Ans: Free oscillation is the oscillation of the particle with a fundamental frequency under the influence of restoring force.

Q 5) In free oscillation, what happens to the amplitude, frequency and energy of the oscillating body?

Ans: In free oscillation, the amplitude, frequency and energy of the oscillating body remain constant/unchanged.

Q 6) Why is the frequency of free oscillation called natural frequency?

Ans: The frequency of free oscillation depends on the nature and the structure of the oscillating body.

Q 8) In damping oscillation, why does the oscillation decrease exponentially?

Q 9) What is the damping force?

Q 10) What is forced oscillation?

Q 11) How does the damping effect amplitude in forced oscillation?

Ans: The forced oscillation does face the damping effect. But the supply of external force results in gaining the energy thereby maintaining constant amplitude.

Q 13) When can resonance be observed?

Q 14) What is the nature of the frequency in forced oscillation?

Q 15) Can a motion be periodic and not oscillatory?

Ans: Yes.
In the case of uniform circular motion, it is periodic but not oscillatory.