Light is an electromagnetic wave and is transverse in nature. It is emitted in the vibrating electric field. Thus, the light photons in light waves vibrate in all orientations and are called Unpolarised light beams/waves. Confining their orientation (the plane of vibration) to a single plane is called Polarisation. The light thus got is polarised light. This can be achieved by natural phenomena like reflection, refraction, and scattering or artificial methods. In short “Confining the plane of vibration of a light photon to a single plane using the principle of scattering of light” is called the Polarisation of light by Scattering.

How Polarisation By Scattering Works?

When an unpolarised ray of light travels through a medium, it undergoes scattering. The medium is composed of many atoms and a ray of light contains a number of light photons. When a light ray strikes the atoms in the medium, they transfer their energy to the atoms, and as a result, the electrons in the atoms are set for vibration. These vibrating electrons emit electromagnetic radiation (in the visible range i.e., light) in all directions. These radiations strike neighbouring atoms and the electrons there also undergo a similar mechanism. The radiation emitted by them will have the same frequency as the incident radiation. This mechanism keeps propagating throughout the medium. This absorption and remission of light radiation cause scattering of light in the medium. The scattered light will have completely polarised light, partially polarised light and completely unpolarised light, depending upon the direction of emitted radiation (explained in the following paragraph). This phenomenon is also observed when sunlight passes through Earth’s atmosphere. The mechanism involved here is well explained below. Figure: The plane of vibration of light before and after polarisation 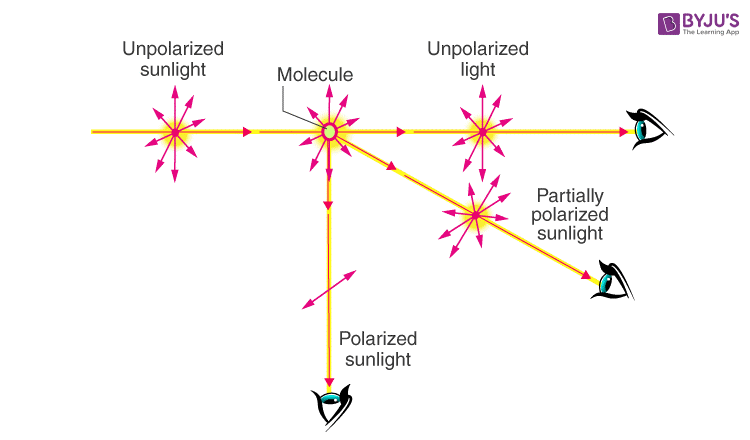 Thus, the sunlight we receive is partially polarised. This is also another reason why the sky is blue! The scattering is well studied under Rayleigh Scattering.

Why Photographers Photos Have Vibrant Sky?

Hope you have understood about polarisation in detail. Stay tuned with BYJU’S to know about various science and math topics.

What are the different types of polarisation?

Types of polarisation depend on the orientation of the electric field, and they are classified as:

What is polarised light used for?

Following are the uses of polarised light:

What does light from the Sun is unpolarised mean?

Sun produces light which is unpolarised because the electric field of this light gets distributed in all the directions. When the sunlight passes through the atmosphere, the light gets semi-polarised. For sunlight to be polarised, the angle of incidence and the angle at which polarisation takes place must be equal.

How is linearly polarised light obtained by scattering?

Linearly polarised light can be obtained by scattering. This is possible because when the light is scattered by the air molecules, the incident light and the scattered light are perpendicular to each other, which is visualized as tiny antennae.

State true or false: Light is an electromagnetic wave and is transverse in nature

Test your Knowledge on Polarisation By Scattering
Q5