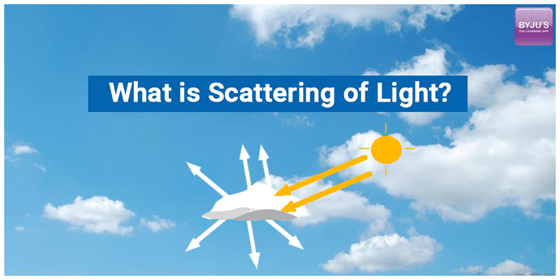 Explain the concept of scattering of light.

When a light beam goes through a medium, it hits the particles existing in them. Due to this phenomenon, some of the light rays get absorbed while a few get scattered in various directions. The intensity of the scattered light rays depends on the particles’ size and wavelength.

What is meant by total internal reflection?

Why is the colour of the sky blue?

Particles and gases in the Earth’s atmosphere scatter sunlight in every direction. Blue light is much more scattered than any other colour because it propagates as smaller, shorter waves. This is the reason why the sky is blue most of the time.

What was the most famous discovery of C V Raman?

Raman effect of scattering.
Test Your Knowledge On What Is Scattering Of Light!
Q5