What is Rolling Friction?

For a moving solid body, there are two principal types of friction that act upon it: 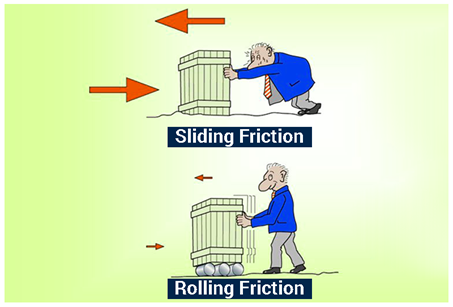 There are three laws of rolling friction:

Cause of Rolling Friction

When an object is rolled on a surface, certain things happen:

The primary cause of this friction is that the energy of deformation is greater than the energy of recovery. Also, there is an adhesive force between the two surfaces which needs to be overcome constantly. The amount of friction is based on a variety of factors such as:

Determining the coefficient of this friction is considerably more complex than that of sliding friction.

“Coefficient of Rolling Friction is the ratio of the force of rolling friction to the total weight of the object.”

In empirical terms, the coefficient of rolling resistance can be expressed as:

What is the difference between Rolling Friction and Sliding Friction?