Did you know that squad of soldiers is asked not to march across a bridge, but always to run haphazardly? To put it in simple terms, if they were to march across as a parade, their frequency may match with the natural frequency of the bridge in consideration causing it to fall, prove dangerous for the surrounding people.

The natural frequency is the frequency at which a system oscillates when not subjected to any external influences. Have you ever seen someone tune a guitar? They either use a tuner or another guitar such that the frequency of the string in consideration matches with the gauge.

The above instances are examples of resonance. In the first case, the frequency of the soldier’s march is considered to be in resonance with that of the natural frequency of the bridge to cause failure. A similar phenomenon is presented in the second case. In this article, let us know in detail about forced oscillation and resonance.

The bridge mentioned in the first instance may fail due to this oscillation at great amplitude. While tuning a guitar (one system) using another guitar (another system), you can see that at the resonant frequency, the amplitude of vibration of the string is greatest.

These large amplitude oscillations produced at the resonant frequencies are because of vibrational energy being stored in the system.

In terms of resonance and natural frequency explain what causes the glass to shatter in the famous magic trick that involves the performer singing a note toward a crystal glass until the glass shatters.

The performer must be singing a note that corresponds to the natural frequency of the glass. When a sound wave is directed at a glass, the glass responds by resonating at the same frequency as the sound wave. With enough energy introduced into the system, the glass begins to vibrate eventually shatters.

Why are soldiers ordered to “route step” (walk out of step) across a bridge?

See the video below, to know about resonance. 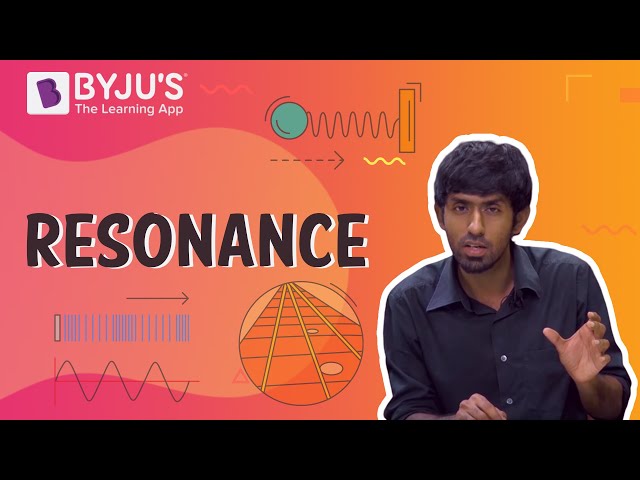 Hope you have understood about forced oscillation and resonance. Stay tuned with BYJU’S and fall in love with learning!.

Give an example for forced oscillation?

Example of forced oscillation: when you push someone on a swing, you have to keep periodically pushing them so that the swing doesn’t reduce.

What are the types of damping?

The following are the types of damping:

When an external vibrating system causes another system to oscillate with greater amplitude at a specific frequency, the phenomenon is called resonance.

Give the formula to calculate the frequency of oscillation?

What are the types of resonance?

Types of resonance are:
Test Your Knowledge On Forced Oscillation And Resonance!
Q5