We hear the word “resonance” used a lot in physics, but let us take a second to ask “What is Resonance?” In order to explain the word, we first need to be thorough with the following terms:

Now that we have briefed you with the Period and Frequency, let us understand resonance in the next section.

Resonance occurs when a material oscillates at a high amplitude at a specific frequency. We call this frequency resonant frequency. The dictionary defines resonance as,

A phenomenon in which an external force or a vibrating system forces another system around it to vibrate with greater amplitude at a specified frequency of operation.

Some Examples of Resonance

Below we have listed examples of resonance that we can witness in our daily lives:

One of the familiar examples of resonance is the swing. It is common knowledge that the swing moves forward and backwards when pushed. If a series of regular pushes are given to the swing, its motion can be built. The person pushing the swing has to sync with the timing of the swing. This results in the motion of the swing to have increased amplitude so as to reach higher. Once when the swing reaches its natural frequency of oscillation, a gentle push to the swing helps to maintain its amplitude due to resonance. But, if the push given is irregular, the swing will hardly vibrate, and this out-of-sync motion will never lead to resonance, and the swing will not go higher.

To learn more about other related concepts of resonance, below are the links:

How to Calculate Resonant Frequency?

A resonant frequency is the natural vibrating frequency of an object and is usually denoted as f with a subscript zero (f0). Resonance is witnessed in objects that is in equilibrium with acting forces and could keep vibrating for a long time under perfect conditions.

To find the resonant frequency of a single continuous wave, we use the formula,

There are many types of resonance, and they are:

In a circuit when the inductive reactance and the capacitive reactance are equal in magnitude electrical resonance occurs. The resonant frequency in an LC circuit is given by the formula 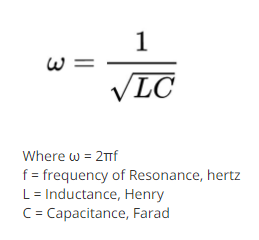 Read more about sound resonance and parallel resonance and learn how it is valid in practical life only through BYJU’S engaging videos.