Bragg’s law is a special case of Laue diffraction, which determines the angles of coherent and incoherent scattering from a crystal lattice. When X-rays are incident on a particular atom, they make an electronic cloud move like an electromagnetic wave. The movement of these charges radiates waves again with similar frequency, slightly blurred due to different effects, and this phenomenon is known as Rayleigh scattering. Basically, the law explains the relationship between an x-ray light shooting and its reflection off from a crystal surface.

The exact process takes place upon scattering neutron waves via nuclei or a coherent spin interaction with an isolated electron. These wavefields that are re-emitted interfere with each other destructively or constructively, creating a diffraction pattern on a film or detector. The diffraction analysis is the resulting wave interference, and this analysis is known as Bragg diffraction.

According to Bragg Equation:

Therefore, according to the derivation of Bragg’s Law: 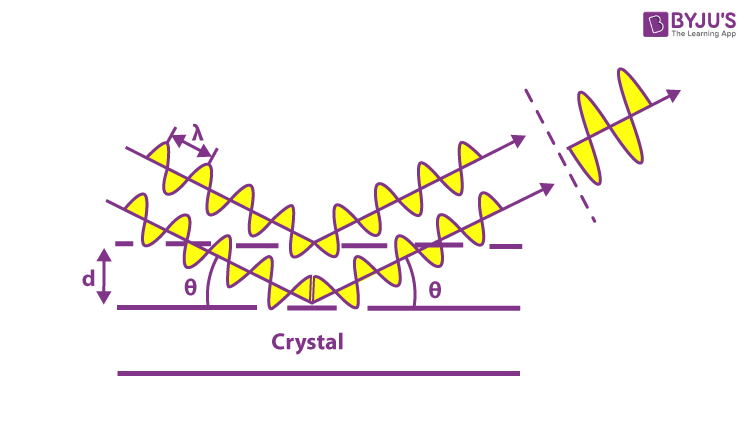 This observation illustrates the X-ray wave interface, called X-ray diffraction (XRD) and proof for the atomic structure of crystals.

Bragg was also awarded the Nobel Prize in Physics for identifying crystal structures starting with NaCl, ZnS, and diamond. In addition, to understand the structure of every state of matter by any beam, e.g., ions, protons, electrons, neutrons, with a wavelength similar to the length between the molecular structures, diffraction was developed.

Consider the following figure of beams in which the phases of the beams coincide when the incident angle is equal to the reflecting angle. The incident beams are parallel to each other until they reach point z. When they are at point z, they strike the surface and travel upwards. At point B, the second beam scatters. AB + BC is the distance travelled by the second beam. The extra distance is known as the integral multiple of the wavelength. 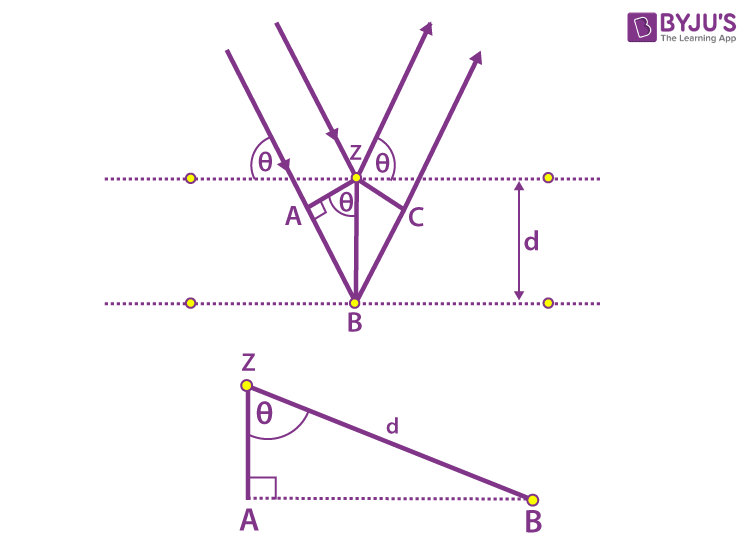 We also know that AB = BC

d is the hypotenuse of the right triangle Abz. Ab is the opposite of the angle θ.

The above equation is Bragg’s law expression.

There are numerous applications of Bragg’s law in the field of science. Some common applications are given in the points below.

Bragg’s diffraction was first proposed by William Henry Bragg and William Lawrence Bragg, in 1913. Bragg’s diffraction occurs when a subatomic particle or electromagnetic radiation, waves have wavelengths that are comparable to atomic spacing in a crystal lattice.

The wavelength of the X-rays is 0.071 nm which is diffracted by a plane of salt with 0.28 nm as the lattice constant. Determine the glancing angle for the second-order diffraction. Assume the value of the salt plane to be 110, and the given salt is rock salt.

Substituting in the Bragg’s equation,

The wavelengths of first-order X-rays are 2.20A0 at 2708’. Find the distance between the adjacent Miller planes.

The concluding ideas from Bragg’s law are:

The diffraction can be conspired to occur for a given wavelength and set of planes. For instance, changing the orientation continuously, i.e., changing theta until Bragg’s Law is satisfied.

What does Bragg’s Law tell us?

Bragg’s law explains the relationship between an x-ray light shooting into and its reflection off from a crystal surface.

Why is Bragg’s Law important?

Bragg law is useful for measuring wavelengths and for determining the lattice spacings of crystals.

What are the applications of Bragg’s Law?

In the case of XRF (X-ray fluorescence spectroscopy) or WDS (Wavelength Dispersive Spectrometry), crystals of known d-spacings are used as analyzing crystals in the spectrometer.

Bragg’s law experiment is based on which scattering of waves?

Bragg’s law experiment is based on the Rayleigh scattering in which the charges are scattered without a change in their wavelength. 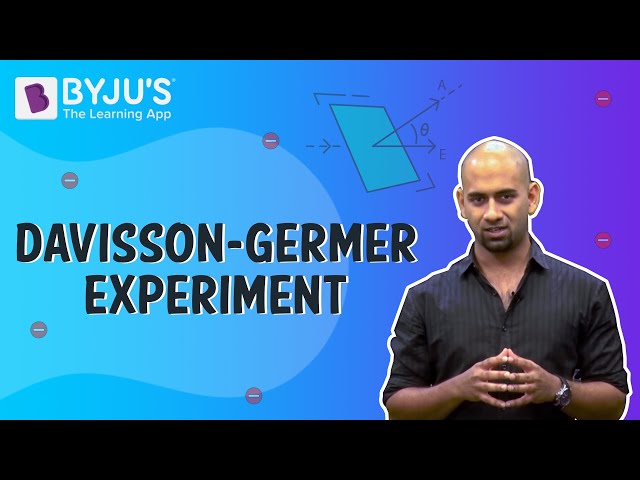