A Van de Graaff generator is an electrostatic generator, invented by an American physicist Robert J. Van de Graaff. It uses a moving belt that accumulates charge on a hollow metal structure designed like a globe, placed on the top of a column that is insulating in nature and thus, creating a very high electric potential in the order of a few million volts.  This results in a very large electric field that is used to accelerate charged particles.

So the potential outside is that of a point charge; and inside it is constant, namely the value at the radius R. We thus have:

Potential inside conducting spherical shell of radius R carrying charge Q = constant and is given by, 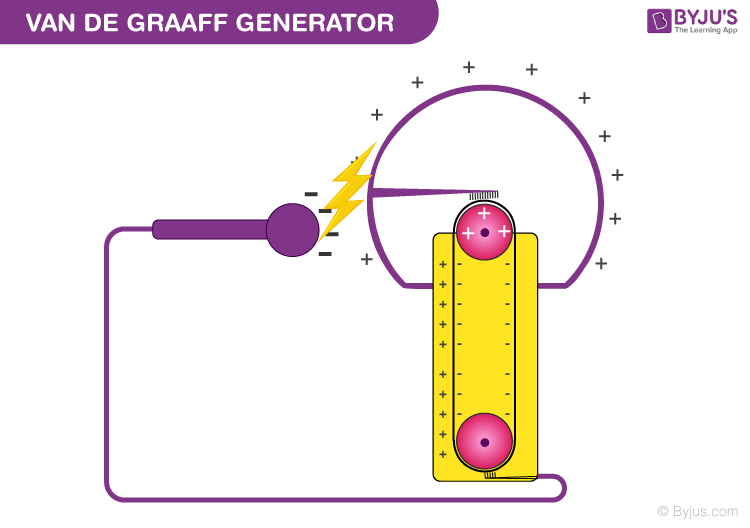 Let a small sphere be placed at the center of the large one such that the radius of the smaller sphere is r and the charge over its surface is q. The potential energy thus generated due to the smaller surface at different points in the system can be given as the following values,

At the surface of the small sphere:

At the large spherical shell of radius R:

If we consider the total charges in the system, that is, q and Q, then the total potential energy due to the system of charges can be given as, Following is the table of link related to the difference between motor and a generator:

In the figure given above, we can see a Van de Graaff generator. Here, a large spherical shell is held at a height of several meters above the ground supported by an insulating column. Two pulleys are wound with a belt-like insulating material, with one being at ground level and the other one at the center of the shell. This belt undertakes a continuous motion, thus carrying a positive charge continuously from the ground to the top.  This belt is kept moving continuously by a motor driving the lower pulley. The positive charge is transferred to the larger shell by a carbon brush, thus rendering the outer shell with a very high potential over time.

Energy is a scalar or vector quantity?

How does the Van de Graaff generator work?

Van de Graaff generator uses a moving belt to collect charge on a hollow metal structure made in the shape of a globe. It is placed on the top of a column and is insulating. It helps generate a very high electric potential of few million volts.

What is an electrostatic generator?

It is an electrical generator that produces static electricity at low continuous current and high voltage.