The scenes of the world are continuously mutating. Sun, rain, frost, and wind are breaking down even the most solid of the rocks into smaller bits before they are taken away. This process is termed as weathering. The action of the elements of climate and weather, animals, and plants on the land surfaces to break them down biologically, chemically, and physically is called weathering. It is the breakdown and decay of rocks in situ. It can be a very elongated slow procedure, taking hundreds of years. However, weathering can also be rapid, such as the damage to pavements or roads after a cold, frosty winter.

How is Weathering different from Erosion?

Weathering has no moving agent of transport, whereas in Erosion the rock and upper layer soil particles are worn away and moved elsewhere by water, wind, etc.

How is Weathering different from Erosion? 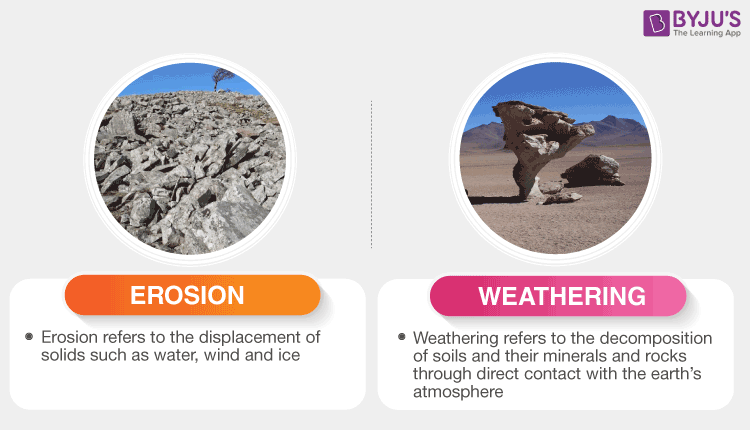 Physical weathering happens when rocks are fragmented into minor fragments while ensuring no alterations in their chemical makeup. The main causes behind physical weathering include spontaneous fluctuations in temperature like too high or too low heat or cold. Variations in would be the causal element of freeze-thaw action and this occurs when water gets collected in the fissures in rocks all through the day and during the temperature drops at night that would be sufficient to freeze water into ice. It is a known fact that almost every substance grows in size when heated and contracts when exposed to low-temperature situations. Unlike these cases, water converts to ices when the temperature goes below zero and actually expands. The resultant action would result in the expansion of the fissure and thereby the structure of it weathers.

Rocks are also fragmented by mechanical force. This procedure is called mechanical weathering. Because of the frequent variations in temperature, rocks begin to contract and expand. This action results in the breakdown of rocks. It is also caused by the roots of plants. They are growing through the cracks in the rocks and cracks the rocks apart. Chemical and mechanical weathering work together to break down rocks. Often, mechanical cracks and water seep into the rock and weather it chemically.

Test your knowledge on Weathering
Q5