Kinematics Of Rotational Motion Around A Fixed Axis 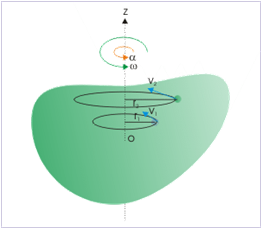 Let us consider an object undergoing rotational motion about a fixed axis, as shown in the figure. Let us take a particle P on the rotating object. When the object rotates about the axis passing through O, the particle P displaces from one point to another, such that, the angular displacement of the particle is Ɵ.

Now, the rate of change of angular displacement with time is termed as the angular velocity of the particle.

Further, the angular acceleration of the particle P is defined as the rate of change of the angular velocity of the object.

As we know that the kinematic equations of linear motion are given as:

The equations analogous to these for rotational motion can be given as:

To learn more about the kinematics of rotational motion around a fixed axis, download BYJU’S The Learning App.