The branch of science that deals with atmospheric forecasting is known as meteorology. Meteorology mainly involves the calculation of the speed of wind. Wind speed is calculated using the device known as an anemometer. In this article, let us study in detail about anemometer and its types along with their uses.

An anemometer is an instrument used to measure the speed of the wind, which is a common weather station instrument, or to calculate any form of current gas. The term is derived from the Greek word anemos meaning wind which was first explained by Leon Battista Alberti who was an Italian artist and an architect in the year 1450. He used a mechanical anemometer which was placed perpendicular to the wind direction such that the wind velocity as indicated by the angle of inclination of the disc. 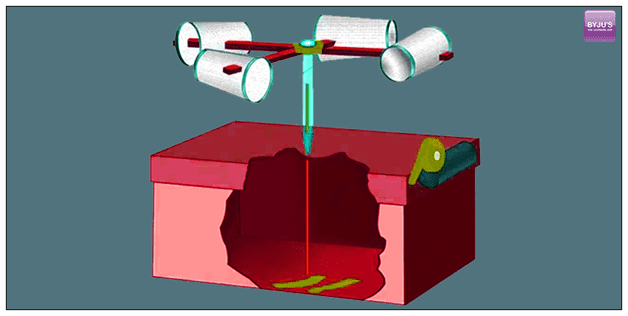 How To Make An Anemometer

Anemometer can be easily made by assembling a few basic materials. There are various types of anemometer depending on different situations, measurements, and ecosystems. An anemometer also uses Ultrasonic and Laser techniques to get accurate measurements of the wind.

For the science experiment of 5th grade, the anemometer is prepared with disposable cups. It is commonly called as Robinson Anemometer. It uses disposable cups to catch the wind that induces to spin. To calculate the wind speed, one has to measure the number of spins in a given time interval. This will show how fast the wind is moving.

The cup anemometer expressed in this experiment is not capable of displaying the wind speed, but it can give an idea of how fast the wind is blowing. However, you can record the speed of wind using this anemometer only by measuring revolutions per minute. Meanwhile, the higher capacity anemometer that is used in weather forecasting measures the wind speed by kilometer per hour or miles per hour.

You can keep a record of the wind by revolution per minute for a few days and calculate the average wind speed in a week. You can also check the wind speed at different times of the day. Verifying the speed in the morning, afternoon, evening, and at night.

Other than measuring the speed of the wind, the anemometer is used for the following purposes:

What is an anemometer?

An anemometer is an instrument used to measure the speed of the wind.

Who first explained the term anemometer?

Anemometer was first explained in 1450 by Leon Battista Alberti.

What are the types of anemometers?

Types of anemometers are:

Which type of anemometer is used in river hydrology and high-tech jet engines?

In a sonic anemometer which waves are used to find the speed of the wind?

Sound waves are used in a sonic anemometer to find the speed of the wind.

Stay tuned with BYJU’S to learn various concepts of Physics in an interesting way.

Test your knowledge on Anemometer
Q5