Ancient literature from the Greeks and the Mediterranean suggests that people had knowledge about the rods of amber when rubbed to cat fur, attracted small pieces of paper. Long before the concept of electricity and electrical circuit existed, people were aware of the shocks due to an electric eel. Now as we know, electricity is one of the most convenient ways of the transfer of energy. But electronic circuit components are the physical entity in an electronic system.

Electricity has been adapted for a huge and growing number of uses in our everyday life. Be it to power our devices such as bulbs, fans, air conditioners, electric irons, washing machines, or charging our batteries, mobile phones, etc. We cannot imagine our lives without them. But ever wondered how pressing a switch makes the light bulb slow. Why does the torch stop working when used for too long? In order to understand these, we need to take a closer look at the concept of electricity with a basic electric circuit. Just by looking at the diagram, we cannot understand the working of the circuit, as the components are still new to us. Let us find out what these symbols stand for.

Some basic circuit components which are used in an electronic system is given below.

A cell is a device used to power electrical circuits. It has two terminals; positive and negative. The terminal marked negative is the source of electrons, that when connected to a circuit delivers energy.  We can take the example of a normal torch battery. A battery is a combination of multiple cells. If we take a closer look at it, we can see positive and negative marks. The same marks are present on the torch we put our batteries into.

When we insert the battery into our devices matching these signs, we complete a circuit and that is how the circuit gets its power. Once the reserve of an excess electron inside the cells is over, the delivery of energy stops, and the circuit breaks. Thus, the device connected to the circuit, such as a bulb, stops working. Batteries come in various shapes and sizes, starting from the miniature batteries used in hearing aids and watches, torch, and mobile batteries to lead-acid batteries used in cars and to power inverters.

A switch is a device that can break an electrical circuit by diverting the current from one conductor to another conductor or an insulator. These set of contacts are termed as open and closed. Open circuit means that the contacts are separated and the circuit is broken, so no current is flowing.

Whereas closed circuit means that the contacts are touching, the circuit is complete and the current is flowing. Switches are of many types and are used depending upon the device we are using. Generally, we use them in our house for controlling the fans, bulbs, call bells, power switches for devices like refrigerators, washing machines, etc. A light bulb is a device that produces light from electricity. Light bulbs turn the electricity to light by sending current through a thin wire called filament. The filament is usually made of tungsten, a material that emits light when electricity is passed through it. The emission of light is due to the high resistance offered by the material tungsten, which we will learn in higher classes.

Apart from lighting, the light bulbs are used in electronic items as an indicator, traffic signals, indicator lights in cars, etc. 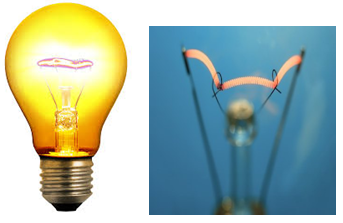 A wire is a flexible strand of metal, usually cylindrical. Wires are used for establishing electrical conductivity between two devices of an electrical circuit. They possess negligible resistance to the passage of current. The wires are covered by an insulated coating of different colours. The colour codes are used to distinguish between neutral and ground, and live wire, which differs from one country to another. Let us consolidate these elements to complete the circuit. A basic circuit is shown in the image below:

We see here, electrical wires are connecting a light bulb to a battery with a switch in between them. Here as the switch is closed, the circuit gets completed, the electrons start to flow and deliver energy from the battery to the light bulb, thus making it glow.