Transistor as a device - Switch and Amplifier

We have read about the configurations in which the transistor can be connected; namely CB, CC, and CE, the biasing of the E-B and B-C junction, and the regions of operations; namely cutoff, the active region, and the saturation region.  We also know that the transistor when used in the cutoff or saturation state, acts as a switch and then operated in the active region is used as an amplifier. In this piece of article, we will learn how a transistor is used as a switch and as an amplifier, in detail.

Transistor as a Switch 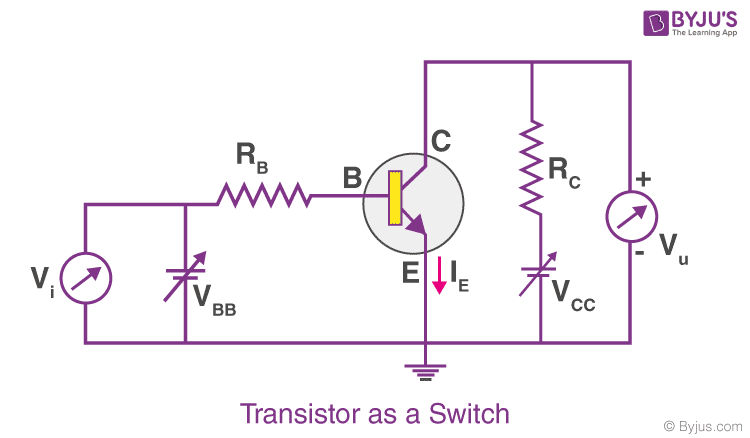 When the transistor is in the cut-off region, this is because there is no flow of current through the transistor. This also means that the base current IB is zero and the collector current IC is also zero. When these currents are zero, the collector voltage VCE would be maximum which results in a large depletion layer.

Let us consider a base-biased transistor in the CE configuration, as shown in the figure. As we apply Kirchhoff’s voltage law to the input side and the output side of the circuit, we can write,

And when the input voltage Vi is greater than 0.6 V the transistor remains in its active state and the current Ic is obtained in the output path. Also, the output voltage V0 decreases as we increase the

Applications of transistor as a switch

Following is the list of applications of transistor as a switch:

Transistor as an Amplifier 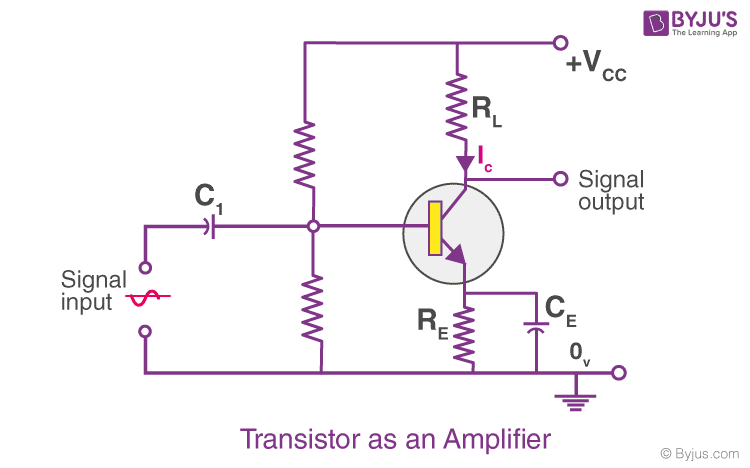 Therefore, we can write,

As we also have,

Therefore, we can also write,

Here, βac is can be given as,

We can conclude that the linear portion of the active region of the above-mentioned curve can be used as an amplifier.

Voltage gain is defined as the ratio of change in output voltage to the change in the input voltage.

Application of transistor as an amplifier

The main application of transistor as an amplifier is in the field of electronics and communication. Following is the list of these applications:

Stay tuned with BYJU’S to learn more about how transistors can be used as a switch and an amplifier, actions of a transistor, types of switches, and other related topics.

Test Your Knowledge On Transistor As Switch Amplifier!
Q5