We know the effective use of plane mirrors is to see reflections of objects. We use mirrors almost in every place where there is a need to look for what’s behind us. Invention of the mirror is the greatest contribution to humankind.

Applications and Uses of Mirrors

Mirrors used in periscopes and kaleidoscopes

Vehicles use mirrors in their head lights for reflecting powerful parallel beams of light. Even we can see major uses of convex mirrors in automobiles as rear view mirrors because they give erect image and due to its curve outwards, it gives a wider field of view.

It is used in torch lights and flashlights to reflect light beams and even used in overhead projectors for the same reason. These uses of plane mirrors in torch lights indeed can be used for searching purpose at night and dark places.

We wake up every morning and the first thing we use is the mirror to see, to shave, to brush, to do makeup etc. Without it, it would be very difficult to do these activities. Even there are uses of concave mirror as shaving mirrors in order to see larger image of face.

Dentist use mirrors while performing any examination to see images of teeth. It is also used in microscopes for reflecting the image of the object which is monitored.

In a solar cooker, a plane mirror reflects most of the sunlight which falls on it. Solar cooker is the most efficient way of using renewable energy for cooking purpose.

Uses of plane mirrors for security and safety

Mirrors are used while looking for explosives underneath a vehicle. Even these mirrors are used in shops to keep an eye on the customers. Mirrors are also used in blind turns of busy roads to see the vehicles coming from other side.

See the video below to learn about the reflection on a plane mirror. 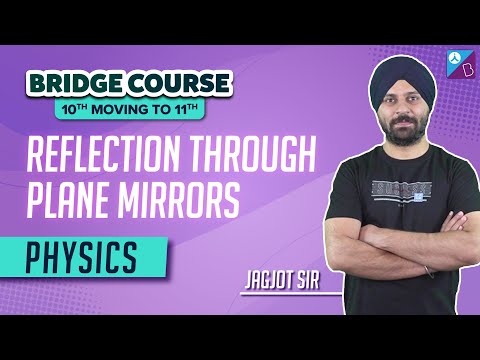 These were some applications of plane mirrors. If you wish to find out more, download BYJU’S – The Learning App.

How many reflecting surface does a kaleidoscope feature?

A kaleidoscope is an optical instrument that consists of two or more reflecting surfaces.

What is a periscope?

A periscope is an instrument designed for observing over, around or through an obstacle or object, which is prevented by a direct line of sight.

Plane mirror is used in

Can virtual image be obtained on screen?

Virtual images cannot be obtained on the screen.

Are mirrors used in torch lights?

Yes, mirrors are used in torch lights.
Test your Knowledge on uses of plane mirrors
Q5