Why Do Stars Twinkle?

Why do stars twinkle? 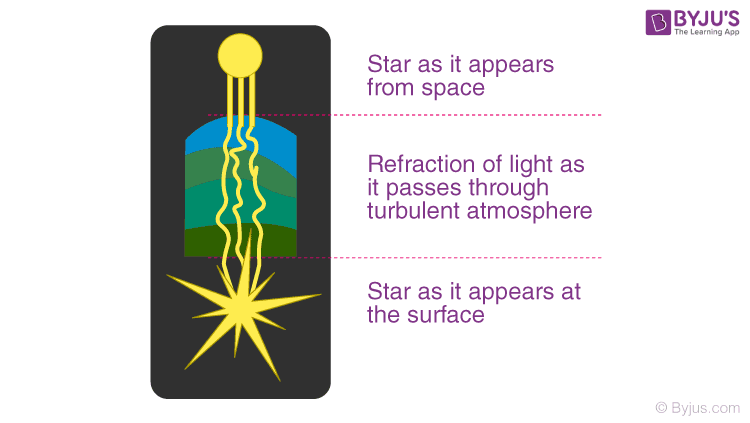 The video below demonstrates the phenomenon of refraction with examples.

So how are refraction and twinkling connected? The atmosphere of the earth is made of different layers. It is affected by winds, varying temperatures, and different densities as well. When light from a distant source (a star) passes through our turbulent (moving air) atmosphere, it undergoes refraction many times. When we finally perceive this light from a star, it appears to be twinkling! This is because some of the light rays reach us directly and some bends away from and toward us. It happens so fast that it gives a twinkling effect.

If you are in a large empty field such that the horizon is visible to you, you will notice that stars in this region appear to twinkle a lot more than stars right overhead. Why do you think this happens? Why do stars twinkle more when viewed from such places? It is because there are more layers of the atmosphere between you and the star in this direction. Therefore, more series of refractions!

Planets are closer to us as compared to stars. Stars are very far away from us and appear as point size to us. Due to this, it seems as if the light is coming from one point source. On the contrary, planets are at a lesser distance from us as compared to stars. Due to this reason, they appear much more prominent, and the light seems to come from more than one point source. The dimming effect of some of the points of light coming from the planet is nullified by the brightening effect of light coming from other points.

Learn some interesting facts about the star by watching the video below:

Stay Tuned to BYJU’S and Fall in Love with Learning!

Test Your Knowledge On Why Do Stars Twinkle!
Q5