When force is applied to a material, we know that it either stretches or compresses in response to the applied force. In mechanics, the force applied per unit area is known as stress and is denoted by the symbol σ. The extent to which the material compresses or stretches is known as strain. Different materials respond differently to applied stress.  This information is necessary for engineers while selecting materials for their structures.

In 19th-century, while studying springs and elasticity, English scientist Robert Hooke noticed that many materials exhibited a similar property when the stress-strain relationship was studied. There was a linear region where the force required to stretch the material was proportional to the extension of the material. This is known as Hooke’s Law. In this article, let us discuss Hooke’s law in detail.

What is Hooke’s Law?

the strain of the material is proportional to the applied stress within the elastic limit of that material.

When the elastic materials are stretched, the atoms and molecules deform until stress is been applied and when the stress is removed they return to their initial state.

Interested to learn more about spring? Below are the links:

Consider a spring with load application as shown in the figure. 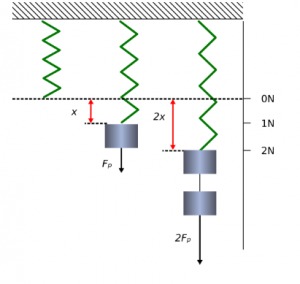 Different springs, depending on the material, will have different spring constants. This can be calculated. The constant calculated empirically can be used further. The figure shows us three instances, the stable condition of the spring, the spring elongated to an amount x under a load of 1 N, and the spring elongated to 2x under a load of 2 N. If we plug in these values into the equation above we get the spring constant for the material in consideration.

The figure below shows the stress-strain curve for low carbon steel. 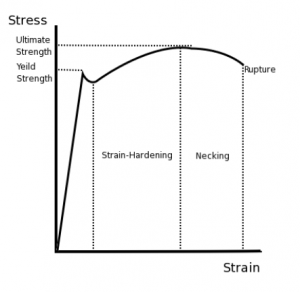 The material exhibhits elastic behaviour up to the yield strength point, after which the material loses elasticity and exhibits plasticity.

The ultimate strength of a material is defined based on the maximum ordinate value given by the stress-strain curve (from origin to rupture). The rupture strength is given by the value at a point of rupture.

This video explains you the general stress-strain graph of an elastic material experiencing tensile load and what are various stages in it. Within the elastic limit it follows Hooke’s law. As we keep on increasing the load, other stages and points like proportionality limit, yield point, fracture point, ultimate tensile strength are achieved and they have been well explained in this video. 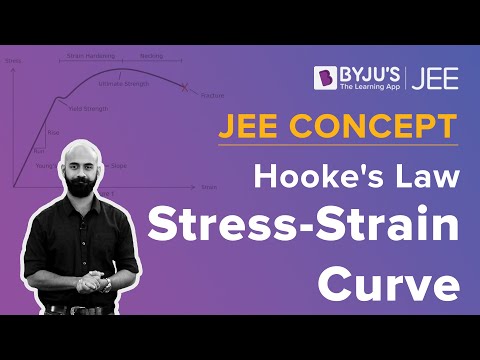 The applications of Hooke’s Law are as follows:

The disadvantages of Hooke’s Law are as follows:

Read many such interesting articles at BYJU’S. Keep Learning!