Potential Energy Of A Spring

When we compress or extend a stretched spring, we experience a force equal to that applied by us in the opposite direction. Have you wondered why this happens? When a spring deviates from its mean position, it tends to restore its equilibrium by exerting a force equal and opposite to the external force. But in which way can this force be helpful to us? Can we harness it in any form? We have seen the application of spring force in bicycle carriers and launching devices where the energy gained by disturbing the equilibrium of the spring is utilized as its potential energy and converted to other forms. In this section, we will learn more about this stored energy. 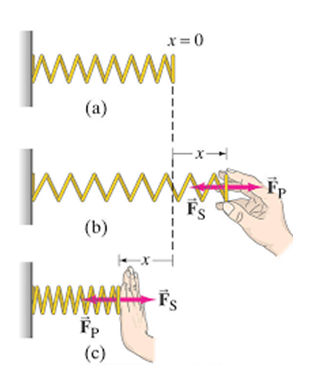 As we know, in an ideal spring, the spring force is proportional to the displacement (x) of its ends from the equilibrium position. So, according to Hooke’s Law,

As shown in fig (b) above, we have pulled the spring such that resultant displacement equal to Xm is measured. The work done by the spring is given by,

which is positive since it overcomes the spring force.

The same is observed for a spring being compressed by a distance x.

Stay tuned with BYJU’S to learn more about the potential energy of spring and other related topics and much more.