Difference between AC and DC

Electric current flows in two ways as an alternating current (AC) or direct current (DC). In alternating current, current keeps switching directions periodically – forward and backward. While in the direct current it flows in a single direction steadily. The main difference between AC and DC lies in the direction in which the electrons flow. In DC, the electrons flow steadily in a single direction while electrons keep switching directions, going forward and then backwards in AC. Let us learn more differences between them in the next few sections.

What is an Alternating Current (AC)?

In alternating current, the electric charges flow changes its direction periodically. AC is the most commonly used and most preferred electric power for household equipment, office, and buildings, etc. It was first tested, based on the principles of Michael Faraday in 1832 using a Dynamo Electric Generator.

Alternating current can be identified in waveform called a sine wave. In other words, it can be referred to as the curved line. These curved lines represent electric cycles and are measured per second. The measurement is read as Hertz or Hz. AC is used to powerhouses and buildings etc because generating and transporting AC across long distances is relatively easy. AC is capable of powering electric motors which are used on refrigerators, washing machine, etc

What is Direct Current (DC)?

Unlike alternating current, the flow of direct current does not change periodically. The current electricity flows in a single direction in a steady voltage. The major use of DC is to supply power to electrical devices and also to charge batteries. Example: mobile phone batteries, flashlights, flat-screen television and electric vehicles. DC has the combination of plus and minus sign, a dotted line or a straight line.

Everything that runs on a battery and uses an AC adapter while plugging into a wall or uses a USB cable for power relies on DC. Examples would be cellphones, electric vehicles, flashlights, flat-screen TVs (AC goes into the TV and is converted into DC).

Difference Between AC and DC 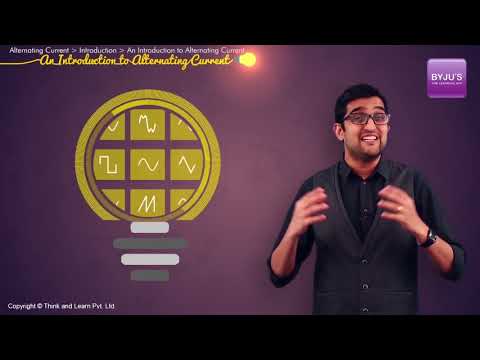 The major differences between Alternating Current and Direct Current are given in the table below:

Stay tuned with BYJU’S to learn Physics concepts with the help of interactive video lessons.

Frequently Asked Questions on Difference Between AC and DC

Why can’t AC be stored in batteries instead of DC?

What are the advantages of AC over DC?

Following are the advantages of alternating current over direct current:

Why is the use of AC voltage preferred over DC voltage?

There are two reasons why the use of AC voltage is preferred over DC voltage:

What is watt less current?

Watt less current is defined as the current in an AC circuit when the average power consumption is zero.

What will be the value of the power factor in the circuit when it is at resonance?

The value of the power factor in the circuit when it is at resonance will be 1.

Give reasons for loss in energy in the transformer.

Following are the reasons due to which there is loss in energy in the transformer:

Test your knowledge on AC and DC difference
Q5