The P-N junction is formed between the p-type and the n-type semiconductors. In this session, let us know more about the P-N Junction.

What is P-N Junction?

Definition: A P-N junction is an interface or a boundary between two semiconductor material types, namely the p-type and the n-type, inside a semiconductor.

As we know, if we use different semiconductor materials to make a P-N junction, there will be a grain boundary that would inhibit the movement of electrons from one side to the other by scattering the electrons and holes and thus, we use the process of doping. We will understand the process of doping with the help of this example. Let us consider a thin p-type silicon semiconductor sheet. If we add a small amount of pentavalent impurity to this, a part of the p-type Si will get converted to n-type silicon. This sheet will now contain both the p-type region and the n-type region and a junction between these two regions. The processes that follow after forming a P-N junction are of two types – diffusion and drift. There is a difference in the concentration of holes and electrons at the two sides of a junction. The holes from the p-side diffuse to the n-side, and the electrons from the n-side diffuse to the p-side. These give rise to a diffusion current across the junction.

There are two operating regions in the P-N junction diode:

There are three biasing conditions for the P-N junction diode, and this is based on the voltage applied: 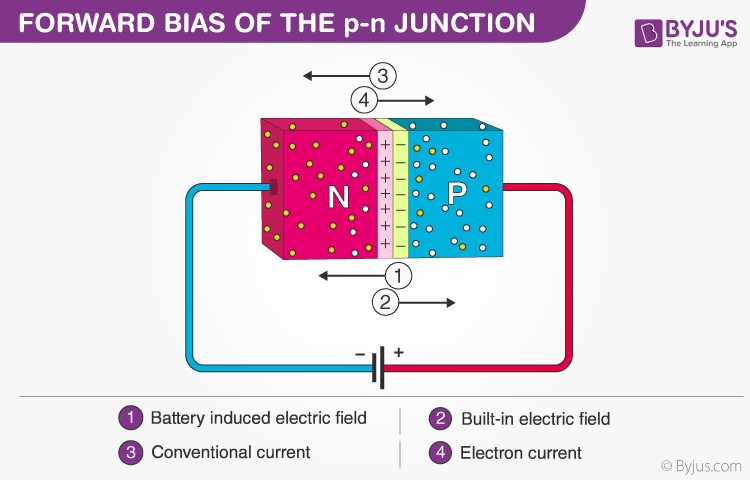 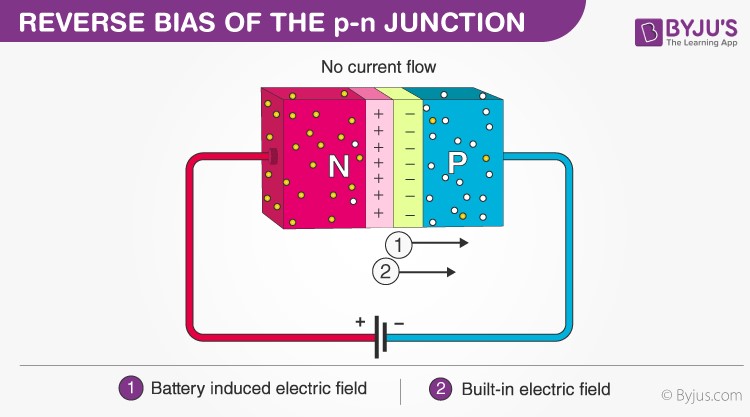 The formula used in the P-N junction depends upon the built-in potential difference created by the electric field is given as:

How does current flow in the PN junction diode?

The flow of electrons from the n-side towards the p-side of the junction takes place when there is an increase in the voltage. Similarly, the flow of holes from the p-side towards the n-side of the junction takes place along with the increase in the voltage. This results in the concentration gradient between both sides of the terminals. Due to the concentration gradient formation, charge carriers will flow from higher-concentration regions to lower-concentration regions. The movement of charge carriers inside the P-N junction is the reason behind the current flow in the circuit. 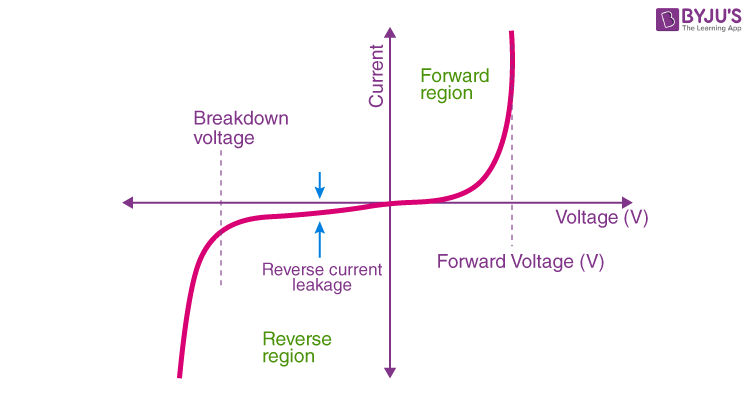 VI characteristics of P-N junction diodes is a curve between the voltage and current through the circuit. Voltage is taken along the x-axis while the current is taken along the y-axis. The above graph is the V-I characteristics curve of the P-N junction diode. With the help of the curve, we can understand that there are three regions in which the diode works, and they are:

When the P-N junction diode is in zero bias condition, there is no external voltage applied and this means that the potential barrier at the junction does not allow the flow of current.

When the P-N junction diode is in forward bias condition, the p-type is connected to the positive terminal while the n-type is connected to the negative terminal of the external voltage. When the diode is arranged in this manner, there is a reduction in the potential barrier. For silicone diodes, when the voltage is 0.7 V and for germanium diodes, when the voltage is 0.3 V, the potential barriers decrease, and there is a flow of current.

When the applied voltage is increased, the minority charges will have increased kinetic energy which affects the majority charges. This is the stage when the diode breaks down. This may also destroy the diode.

What happens when the battery voltage is increased in a forward-biased P-N junction?

The current through the junction increases when the battery voltage is increased in a forward-biased P-N junction.

What happens when a P-N junction is reverse biased?

The holes and electrons tend to move away from the junction.

What are the two breakdown mechanisms of the P-N junction?

The two breakdown mechanisms are Zener breakdown and Avalanche breakdown.

What is the static resistance of a diode?

Static resistance of a diode is defined as the ratio of the DC voltage applied across the diode to the DC current flowing through the diode.

What is the dynamic resistance of a diode?

Dynamic resistance of a diode is defined as the ratio of change in voltage to the change in current.

What is reverse resistance?

Reverse resistance is defined as the resistance offered by the P-N junction diode when it is reverse biased.

A semiconductor is a material whose conductivity stays between an insulator and a conductor.

What are the two types of semiconductors?

What are n-type semiconductors?

What is meant by doping?

In semiconductor technology, doping is the process of intentional infliction of impurities into intrinsic semiconductors for the objective of remodelling their optical, structural, and electrical properties.

A diode is an electrical device that enables the current to flow only in one direction. In an electrical circuit diagram, a diode is denoted by a triangle symbol with a line along one vertex.

What are the main types of diodes?

What are the three regions in which diodes function?

Forward bias, zero bias and reverse bias are the three regions in which diodes function.

Give one application of P-N junction diodes.

P-N junction diodes are used as rectifiers in numerous electric circuits. They are also used as voltage-controlled oscillators in varactors.

Stay tuned with BYJU’S to learn more physics concepts with the help of engaging video lessons.