What is a Semiconductor Diode

A semiconductor diode is a p-n junction diode. It is a two-terminal device which conducts current only in one direction.

The figure above represents the symbol for p-n junction diode, which symbolizes the direction of the current. By applying an external voltage V we can vary the potential barrier.

When we apply the external voltage across the semiconductor diode in such a way that the p-side is connected to the positive terminal of the battery and the n-side is connected to the negative terminal, then the semiconductor diode is said to be forward biased. In this case, the built-in potential of the diode and thus the width of the depletion region decreases and the height of the barrier gets reduced. The overall barrier voltage, in this case, comes out to be V0-V, which is the difference between the built-in potential and the applied potential. As we supply a small amount of voltage, the reduction in the barrier voltage from the above-given formula is very less and thus only a small number of current carriers cross the junction in this case. Whereas, if the potential is increased by a significant value, the reduction in the barrier height will be more, thus allowing the passage of more number of carriers. 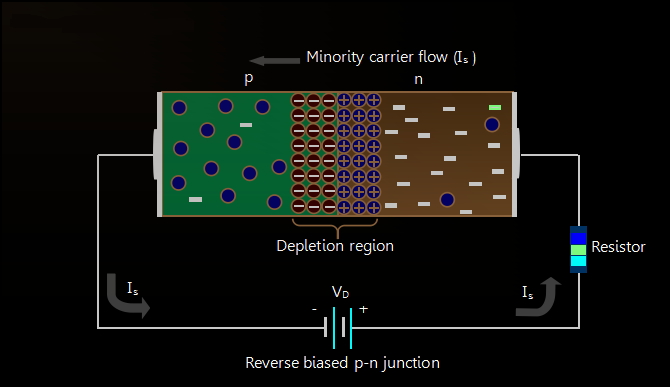 When we apply the external voltage across the semiconductor diode in such a way that the positive terminal of the battery is connected to its n-side and the negative terminal of the battery is connected to the p-side of the diode, then it is said to be in the condition of reverse bias. When an external voltage is applied across the diode, as the direction of the external voltage is the same as that of the barrier potential, the total voltage barrier sums up to be (V0+V). Also, the width of the depletion region increases. As a result of this, the motion of carriers from one side of the junction to another decreases significantly.

Following are the types of semiconductor diodes:

Following are the applications of semiconductor diodes: