What is a Diode?

A diode is a two-terminal electronic component that conducts electricity primarily in one direction. It has high resistance on one end and low resistance on the other end. In this article, let us understand in detail about what is diode.

Diodes are used to protect circuits by limiting the voltage and to also transform AC into DC. Semiconductors like silicon and germanium are used to make the most of the diodes. Even though they transmit current in a single direction, the way with which they transmit differs. There are different kinds of diodes and each type has its own applications.

A standard diode symbol is represented as above. In the above diagram, we can see that there two terminals that are known as anode and cathode. The arrowhead is the anode that represents the direction of the conventional current flow in the forward biased condition. The other end is the cathode.

This article let us understand in detail various types of diodes. 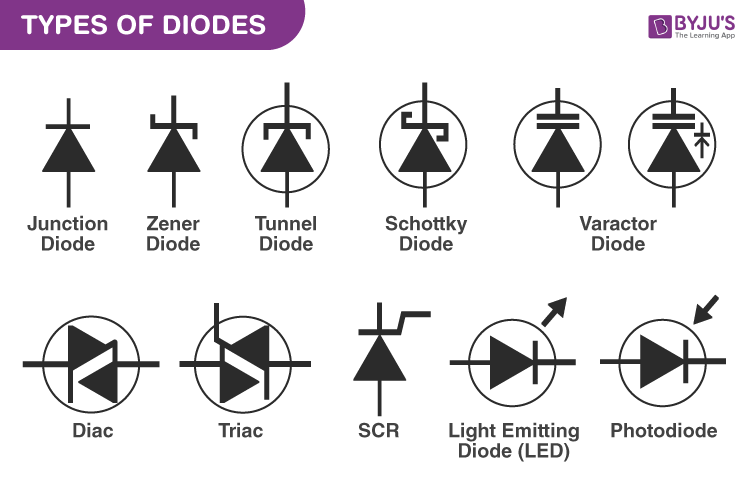 Different Diodes and their Notation

When an electric current between the electrodes passes through this diode, light is produced. In other words, light is generated when a sufficient amount of forwarding current passes through it. In many diodes, this light generated is not visible as they are frequency levels that do not allow visibility. LEDs are available in different colours. There are tricolour LEDs that can emit three colours at a time. Light colour depends on the energy gap of the semiconductor used.

It is a different type of diode as it produces coherent light. It is highly used in CD drives, DVDs and laser devices. These are costly when compared to LEDs and are cheaper when compared to other laser generators. Limited life is the only drawback of these diodes.

This diode belongs to a reverse bias type and operates using the avalanche effect. When voltage drop is constant and is independent of current, the breakdown of avalanche takes place. They exhibit high levels of sensitivity and hence are used for photo detection.

It is the most useful type of diode as it can provide a stable reference voltage. These are operated in reverse bias and break down on the arrival of a certain voltage. If current passing through the resistor is limited, a stable voltage is generated. Zener diodes are widely used in power supplies to provide a reference voltage.

It has a lower forward voltage than other silicon PN junction diodes. The drop will be seen where there is low current and at that stage, voltage ranges between 0.15 and 0.4 volts. These are constructed differently in order to obtain that performance. Schottky diodes are highly used in rectifier applications.

A photo-diode can identify even a small amount of current flow resulting from the light. These are very helpful in the detection of the light. This is a reverse bias diode and used in solar cells and photometers. They are even used to generate electricity.

P-N junction diode allows the current to flow in the forward direction and blocks the flow of current in the reverse direction.

The following are the characteristics of the diode: 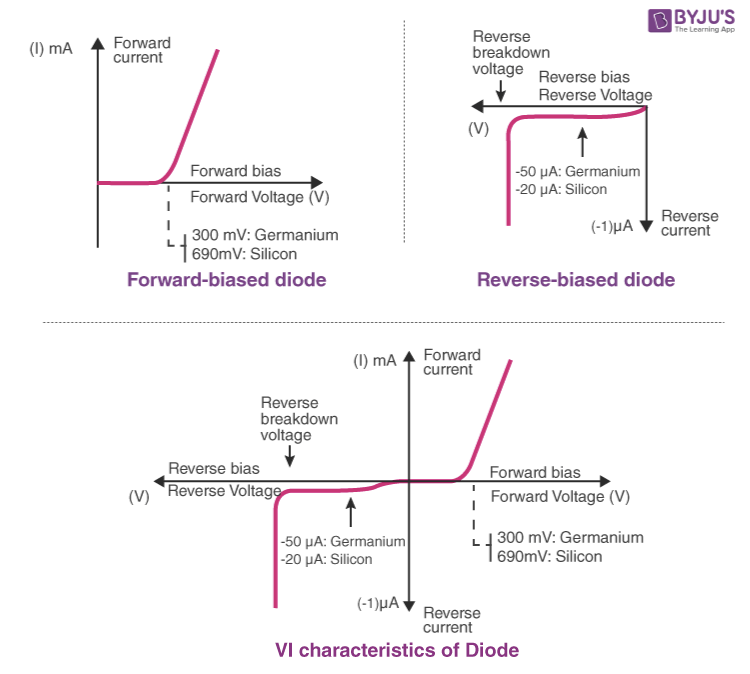 Following are the applications and uses of the diode:

Can a diode be used as a rectifier?

Yes, diodes can be used as a rectifier.

A diode is a two-terminal device that has the capacity to conduct electricity in only one direction.

Which type of semiconductor are used in manufacturing diodes?

Semiconductor materials like silicon and germanium are commonly used in diodes.

Name the diode which has the ability to produce coherent light?

Which is the diode used in solar cells and photometers?

Photodiode is used in solar cells and photometers.

Test your knowledge on Diodes
Q5