A Zener diode not only allows current to flow from anode to cathode but also, in the reverse direction on reaching the Zener voltage. Due to this functionality, Zener diodes are the most commonly used semiconductor diodes. In this article, let us learn the function of Zener diodes along with its construction, operation and more.

A Zener Diode, also known as a breakdown diode, is a heavily doped semiconductor device that is designed to operate in the reverse direction. When the voltage across the terminals of a Zener diode is reversed and the potential reaches the Zener Voltage (knee voltage), the junction breaks down and the current flows in the reverse direction. This effect is known as the Zener Effect.

A Zener diode is a heavily doped semiconductor device that is designed to operate in the reverse direction.

Zener diodes are manufactured with a great variety of Zener voltages (Vz) and some are even made variable.

How does a Zener Diode work in reverse bias?

A Zener diode operates just like a normal diode when it is forward-biased. However, when connected in reverse biased mode, a small leakage current flows through the diode. As the reverse voltage increases to the predetermined breakdown voltage (Vz), current starts flowing through the diode. The current increases to a maximum, which is determined by the series resistor, after which it stabilizes and remains constant over a wide range of applied voltage.

There are two types of breakdowns for a Zener Diode:

Avalanche breakdown occurs both in normal diode and Zener Diode at high reverse voltage. When a high value of reverse voltage is applied to the PN junction, the free electrons gain sufficient energy and accelerate at high velocities. These free electrons moving at high velocity collides other atoms and knocks off more electrons. Due to this continuous collision, a large number of free electrons are generated as a result of electric current in the diode rapidly increases. This sudden increase in electric current may permanently destroy the normal diode, however, a Zener diode is designed to operate under avalanche breakdown and can sustain the sudden spike of current. Avalanche breakdown occurs in Zener diodes with Zener voltage (Vz) greater than 6V.

When the applied reverse bias voltage reaches closer to the Zener voltage, the electric field in the depletion region gets strong enough to pull electrons from their valence band. The valence electrons that gain sufficient energy from the strong electric field of the depletion region break free from the parent atom. At the Zener breakdown region, a small increase in the voltage results in the rapid increase of the electric current.

There are many ways in which a Zener diode is packaged. Some are used for high levels of power dissipation and the others are contained with surface mount formats. The most common type of Zener diode is contained within a small glass encapsulation. It has a band around one end marking the cathode side of the diode. From the diagram, we can see that the band around the package corresponds to the line on the diode circuit symbol and this can be an easy way of remembering which end is for which.

The Zener diode circuit symbol places two tags at the end of the bar – one in the upward direction and the other in the lower direction as shown in the figure. This helps in distinguishing Zener diodes from other forms of diodes within the circuit.

The diagram given below shows the V-I characteristics of the Zener diode. 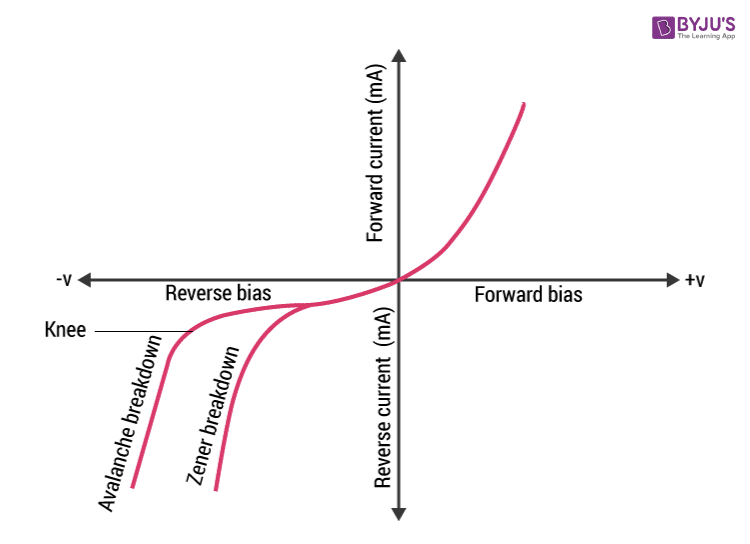 When reverse-biased voltage is applied to a Zener diode, it allows only a small amount of leakage current until the voltage is less than Zener voltage.

Some commonly used specifications for Zener diodes are as follows:

Following are the applications of Zener diode:

Zener diode as a voltage regulator:

When the input voltage is higher than the Zener breakage voltage, the voltage across the resistor drops resulting in a short circuit. This can be avoided by using the Zener diode.

Zener diode is used for modifying AC waveform clipping circuits by limiting the parts of either one or both the half cycles of an AC waveform.

How do you define Zener diode?

A Zener diode is a semiconductor device that allows current to flow either in a forward or reverse direction.

Why is Zener Diode used a regulator?

Zener diode is used as a shunt voltage regulator. Zener diode is connected parallel to the load to make it reverse bias and once the Zener diode exceeds knee voltage, the voltage across the load becomes constant.

What is the difference between a Zener diode and a normal diode?