Light-emitting diodes, or LEDs, are widely used as a standard source of light in electrical equipment. It has a wide array of applications ranging from your mobile phone to large advertising billboards. They find applications in devices that show what the time is and for displaying different types of data. In this post, the main focus would be on learning about LEDs, such as its operations and functions.

What is Light Emitting Diode

A light releasing diode is an electric component that emits light when the electric current flows through it. It is a light source based on semiconductors. When current passes through the LED, the electrons recombine with holes emitting light in the process. It is a specific type of diode having similar characteristics as the p-n junction diode. This means that an LED allows the flow of current in its forward direction while it blocks the flow in the reverse direction. Light-emitting diodes are built using a weak layer of heavily doped semiconductor material. Based on the semiconductor material used and the amount of doping, an LED will emit a colored light at a particular spectral wavelength when forward biased.

Below is the demonstration of the LED symbol. The symbol is similar to that of the p-n junction diode. The difference between these two symbols is that the two arrows indicate that the diode is emitting the light.

Given in the table below are the links related to LED:

The LEDs also have a specific drop in voltage forward in cases where it is used typical circuits like a conventional diode. The drop in voltage depends on the current of the LED, the color of the produced light, etc. There are different values in the drop of voltage that would vary from 1.5V to 2.5 V current for 10 to 50 mA current.

The holes lie in the valence band, while the free electrons are in the conduction band. When there is a forward bias in the p-n junction, the electron which is a part of the n-type semiconductor material would overrun the p-n junction and join with the holes in the p-type semiconductor material. Therefore, regarding the holes, the free electrons would be at the higher energy bands. 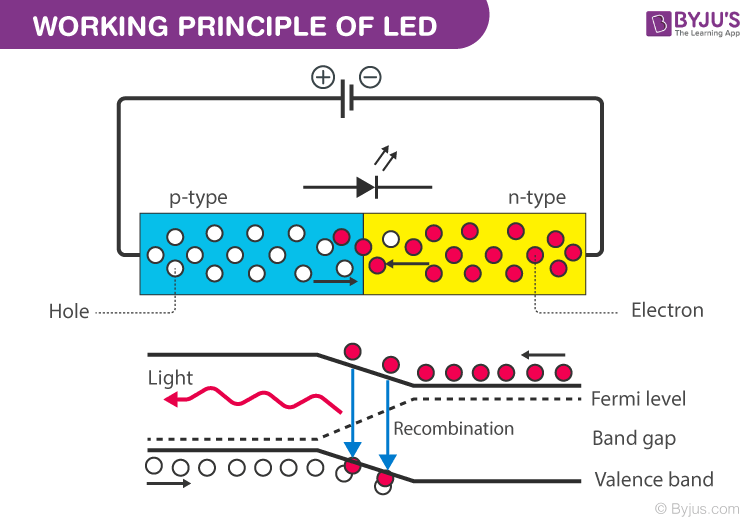 When this movement of free electron and hole takes place, there is a change in the energy level as the voltage drops from the conduction band to the valance band. There is a release of energy due to the motion of the electron. In standard diodes, the release of energy is in the manner of heat. But in LED the release of energy in the form of photons would emit light energy. The entire process is known as electroluminescence, and the diodes are known as a light-emitting diode.

LEDs find applications in various fields, including optical communication, alarm and security systems, remote-controlled operations, robotics, etc. It finds usage in many such areas because of its long-lasting capability, low power requirements, swift response time, and fast switching capabilities. Below are a few standards LED uses:

Below is the list of different types of LED that are designed using semiconductors:

Test your knowledge on LED
Q5