Before we understand what is nuclear fission reaction, let us learn what is meant by nuclear reaction. The reaction that involves the change in the identity or characteristics of an atomic nucleus, induced by bombarding it with an energetic particle is known as a nuclear reaction. The bombarding particle may either be an alpha particle, a gamma-ray photon, a neutron, a proton, or a heavy-ion. In any case, the bombarding particle must have enough energy to approach the positively charged nucleus to within range of the strong nuclear force. Let us learn about nuclear energy and also know what is nuclear fission reaction in detail.

There are four main types of nuclear reactions as follows:

In the article, we will be discussing nuclear fission in detail.
Table of Contents:

What is Nuclear Fission?

When the nucleus of an atom splits into lighter nuclei through a nuclear reaction the process is termed as nuclear fission. This decay can be natural spontaneous splitting by radioactive decay, or can actually be simulated in a lab by achieving necessary conditions (bombarding with neutrinos). The resulting fragments tend to have a combined mass which is less than the original. The missing mass is what is converted into nuclear energy in the above reaction. Therefore, nuclear fission is defined as:

The process in nuclear physics in which the nucleus of an atom splits into two daughter nuclei. 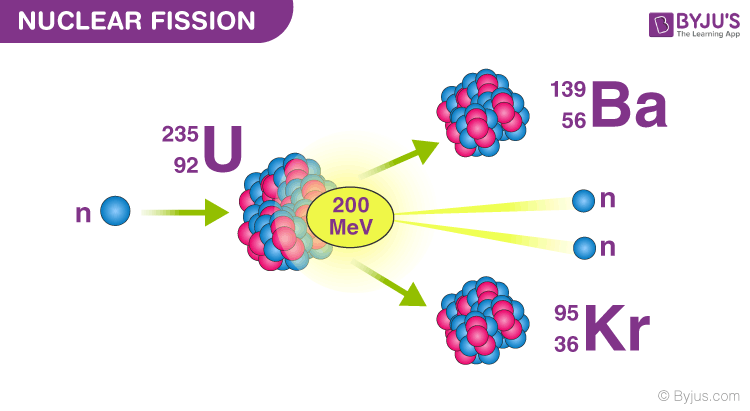 When Uranium-235 atom is bombarded with a neutron, it splits into two lighter nuclei Barium and Krypton.

In the next section, let us study what nuclear energy is.

What is Nuclear Energy?

All matter is made of tiny atoms. All atoms have a nucleus at their core, where most of their mass is concentrated. In specific circumstances, it is possible for this nucleus to undergo certain changes. Nuclear fusion (as the name suggests) is a process of combining small atoms, resulting in heavier atoms with more energy. Nuclear fission is splitting of the nucleus of a heavier atom into a smaller one. Both these processes release a tremendous amount of energy. And how does that happen?

Although the mass in consideration is really small, the speed of light is a large number (299792458 m/s). When this potential was realized it led to the field of harnessing nuclear energy (literally the energy in the nucleus). As per the definition of nuclear energy, it is the energy released during nuclear reactions like nuclear fission or nuclear fusion.

The good thing about nuclear energy is that it has the potential to generate a lot of energy/power without any emission of pollutants. The only disadvantage is the disposal of nuclear waste has to be done extremely carefully.

We use nuclear reactors to generate electricity making use of the nuclear fission reaction. The heat from the nuclear fission is passed to a working fluid, which in turn runs through steam turbines. These either drive a ship’s propellers or turn electrical generators’ shafts.

Nuclear power plants cannot be thoroughly discussed without mentioning nuclear accidents. There is no tale which is more vivid or sobering than that of Chernobyl. The Chernobyl power plant, located about 80 km north of Kiev, Ukraine in the former Soviet Union, was an RBMK-1000 type reactor.

On April 26, 1986, the world’s worst nuclear accident happened at the Chernobyl plant. An explosion and fire in the No. 4 reactor sent radioactivity into the atmosphere. With the flow reduced, the cooling water in the reactor began to boil and turn to steam. 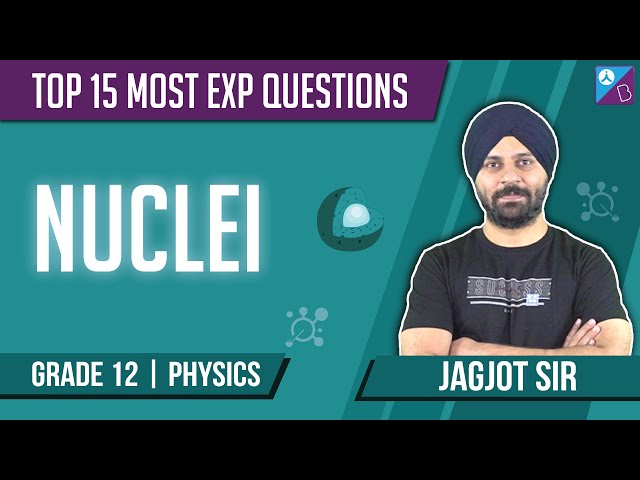 Hope you have understood briefly what is nuclear fission reaction. Stay tuned with BYJU’S or subscribe to our YouTube channel to know more about various science and maths concepts.

What is nuclear fission?

Nuclear Fission is a type of nuclear reaction in which the splitting of a nucleus into two daughter nuclei takes place.

What are the types of nuclear reactions?

The following are the types of nuclear reactions:

What is nuclear energy?

Nuclear energy is the energy released during nuclear reactions like nuclear fission or nuclear fusion.

What is a nuclear fusion reaction?

Nuclear fusion is a type of nuclear reaction in which two lighter nuclei combine to form a heavier one.

Nuclear reactors use which type of reaction to generate electricity?

Give the reaction of the splitting of Plutonium-239.

Which is the primary fuel used in the power plants in nuclear fusion reaction?

Which is the primary fuel used in the power plants in nuclear fission reaction?

The primary fuel used in power plants in nuclear fission reactions is uranium.

What happens when uranium-235 atom bombarded with a neutron?

When an atom of uranium-235 bombards with a neutron, it splits into two lighter nuclei krypton and barium.

Give the equation of splitting of Uranium-233 in nuclear fission reaction?