Before we start with the nuclear reactor, a basic understanding of nuclear fission is necessary. Nuclear fission is the process where the nucleus of a heavy atom splits into fragments of lighter nuclei. This process gives out energy. One of the ways to achieve this is to bombard the nucleus of heavy atoms with neutrinos. Along with producing energy (in terms of the ‘missing mass’), the reaction also produces neutrons. These neutrons can be used to split other atoms further in the reaction. 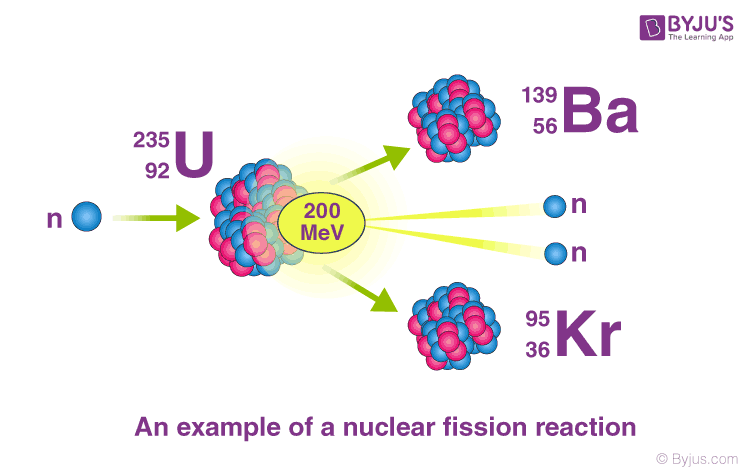 Consider a general energy-producing plant, for example, a plant that burns coal to generate heat energy, which probably runs turbines to generate mechanical energy that can be converted to electricity. So where does the role of nuclear fission come into a nuclear reactor?

The same thing happens in a nuclear reactor, with the difference that nothing is burnt over here. The reactor is powered using continuous fission reactions to generate a continuous flow of energy.

The kinetic energy produced during the fission reaction is converted into thermal energy. The fission products undergo extreme deceleration, where the KE is converted to heat. A neutron moderator can be used to check the speed in a reactor.

The heat produced is transferred to a coolant which is either used directly or indirectly by converting into steam. This can be used to operate turbines, thereby converting the thermal energy into mechanical energy.

In India, nuclear power is the 4th largest source of electricity generation. We have around 21 nuclear power reactors operating from around 7 plants over the country. 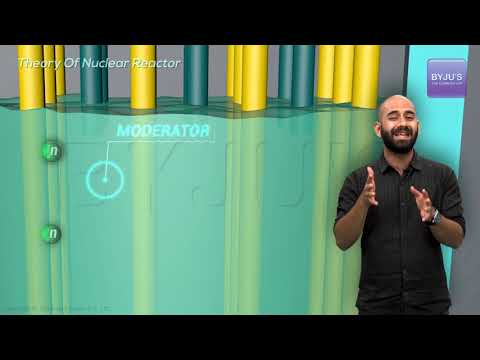 Main Components of a Nuclear Reactor:

⦁ The Core: It contains all the fuel and generates the heat required for energy production.
⦁ The Coolant: It passes through the core, absorbing the heat and transferring into turbines
⦁ The Turbine: Transfers energy into the mechanical form
⦁ The Cooling Tower: It eliminates the excess heat that is not converted or transferred
⦁ The Containment: The enveloping structure that separated the nuclear reactor from the surrounding environment. 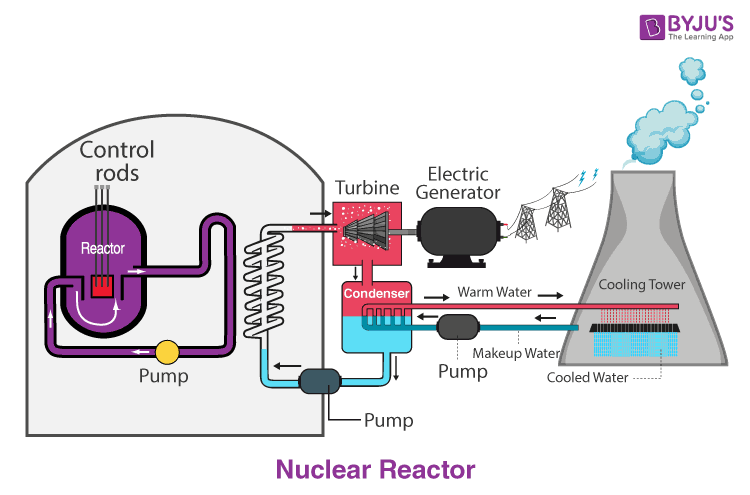 A schematic representation of a nuclear reactor

Based on general use, there are two types of Nuclear Reactor

⦁ Uranium fuelled, namely U-235 isotope as U-238 is not fissionable
⦁ Plutonium fuelled

Based on the design, there are other types of a nuclear reactor like

How do radioactive sources look?

Radioactive sources are sealed or encased in metal or foil. They are normally small and their size varies from tiny “seeds” to the size of the tip of a ballpoint pen or a pencil.

What happens to the radiation produced by the plants?

Nuclear power plants release radioactive gases and liquids into the environment under controlled, monitored conditions to ensure that they pose no danger to the public and environment. These releases dissipate into the atmosphere or a large water source and, therefore, are diluted to the point where it becomes difficult to measure any radioactivity.

If radiation is dangerous then why do we use it?

One could think of radioactive material as a double-edged sword. If used properly, it can benefit us and if misused it can harm us and possibly death. Radioactive materials have beneficial industrial, medical, and academic uses.

What are some benefits of nuclear energy?

Nuclear energy is used in various industrial applications, such as hydrogen production, seawater desalination, in the extraction of tertiary oil resources, district heating, and cooling.

Why is nuclear power not commonly used?

Initial capital costs, fuel, and maintenance costs are much higher for nuclear plants than wind and nuclear projects tend to suffer cost overruns and construction delays.
Test your Knowledge on Nuclear Reactor Based On Nuclear Fission
Q5