Body waves are the waves that can travel through the layers of the earth. They are the fastest waves and as a result, the first waves that seismographs can record. Body waves can move through all states of matter including rocks and molten lava. Surface waves can only travel on the surface of the earth. Their frequency is lower than body waves.

Body waves can be further sub-categorized into 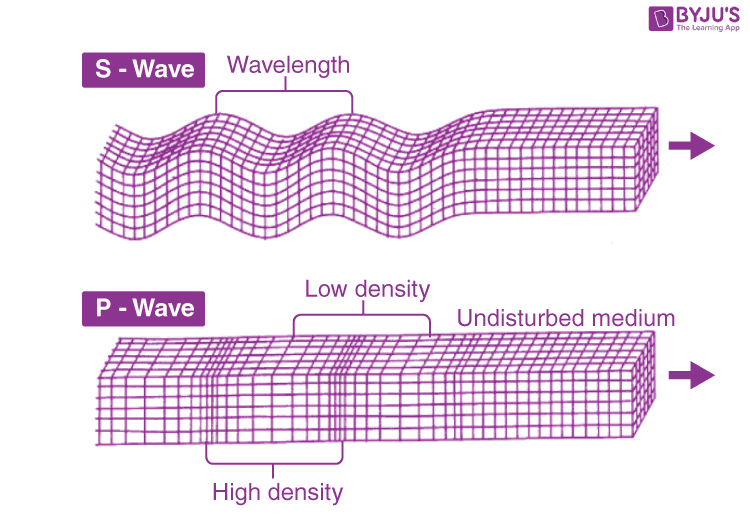 P waves, or Primary waves, are the first waves to arrive at a seismograph. P waves are the fastest seismic waves and can move through solid, liquid, or gas. They leave behind a trail of compressions and rarefactions on the medium they move through. P waves are also called pressure waves for this reason. Certain animals, such as dogs, can feel the P waves much before an earthquake hits the crust (surface waves arrive). Humans can only feel the ramifications it has on the crust.

S waves, or secondary waves, are the second waves to arrive during an earthquake. They are much slower than P waves and can travel only through solids. It is after studying the trajectory of S waves through the layers of earth, scientists were able to conclude that the earth’s outer core is liquid.

Following is the table explaining concepts related to waves:

Following is the table for P and S waves formula based on the distance between the earthquake location and the location of the seismic station:

Notations Used In The P And S Waves Formula

Stay tuned with BYJU’S to learn more about Physics-related concepts.

Test your Knowledge on P-Wave
Q5